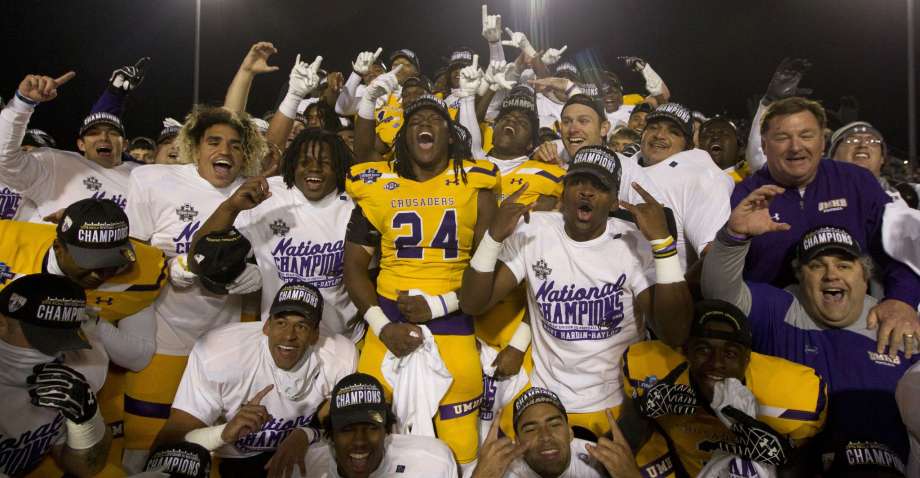 It was a cool but pleasant night in Shenandoah, TX for the 2018 Stagg Bowl, the Division III National Championship Game. It was a rematch of the 2017 game between Mary Hardin-Baylor and Mount Union. Last year it was the Purple Raiders of Mount Union that came away with the win and the title.

The defense had been key for both teams with UMHB giving up only 7.9 points per game and Mount Union just slightly lower at 11.5.

On offense, it was the studs in the backfield doing the work this year. For Mount Union, it’s Josh Petrucelli with is 1,474 yards and 19 rushing touchdowns coming into this contest. For UMHB, Markeith Miller racked up 1,774 yards to go with 29 touchdowns on the ground.

On the opening drive, Mount Union took the ball but was stopped on a three and out. UMHB took over and drove down the field keyed by an 18-yard gain by Markeith Miller. But, the drive would stall after a defensive stand by Mt Union and Anthony Avila missed a 37-yard field goal wide left.

With their turn up, Mt Union drove the ball 55 yards on 11 plays highlighted by some key third down makes. On third and seven D’Angelo Fulford’s pass to Josh Petrucelli fell short and the team settled for a 41-yard Cory Barnett field goal to make it 3-0 with 6:01 to go in the first.

After a UMHB fumble by Jase Hammack was recovered by Mt Union, the Purple Raiders took over at the UMHB 23. Five plays and 23 yards later, Fulford took a keeper in from one-yard out and just like that, it was 10-0 Mt Union. At this point in the game, the Purple Raiders had shown their dynamic offense running and passing the ball. They had shown UMHB they could go right or left and keep the ball moving.

UMHB finally got on track as they took the ensuing kickoff and went 62 yards on four plays capped off by a Jase Hammack pass to T.J. Josey for 36 yards for the score to make it 10-7 with 1:27 to go in the opening quarter.

The second quarter got underway after a successful fake punt by Mt Union. They continued to show their versatility on offense. Be it by ground or air, the Purple Raiders just kept moving the football. The drive took up 14 plays and 65 yards in just over six minutes. It was capped off by a 22-yard, Cory Barnett field goal to make it 13-7 Mt Union.

UMHB finally got a defensive stop on second and third down and got the ball back with 6:22 left in the half. It was a stop the defense really needed as they had been spending much too much time on the field. After Fulford had been killing them with the option, they finally cut him down.

Jonell Reed picked up a holding penalty that hurt UMHB and that added to an already miserable first half for him. He already had dropped two passes to this point of the game. Once again, the Crusaders were forced to punt down six with 4:27 left in the half.

UMHB got the ball back and proceeded to move the ball for the first time in the game. Two huge plays, a 16-yard run by Markeith Miller and a 19-yard completion from Hammack to TJ Josey gave the Crusaders a first and goal at the four. Two plays later, Miller ran it in from two yards out to make it 14-13 UMHB. The Crusaders went into the locker room outplayed, but on the right side of the score.

In the third, UMHB continued the momentum they built at the end of the second quarter. They took the opening possession of the second half and took control in the ground game. After a slow start, Hammack, Miller, and Josey went to work. They got the ball to the Mt Union 13 but had to settle for a 30-yard Avila field goal for a 17-13 lead with 11:01 to go in the third.

The Purple Raiders got the ball back and Fulford continued to beat them with his arm and feet. A huge third-down completion from Fulford to Justin Hill for 22-yards put the ball at the UMHB 35. Once again the arm of Fulford was accurate and deadly. The drive would stall and Mt Union was forced to punt.

The teams traded punts and then Mount Union got the ball back. Again, it was Fulford’s arm doing the damage with a 14-yard and 12-yard pass to Luke Herrington. That was followed by a 10-yard completion to Petruccelli and after a punt, the third quarter was over. It was on to the championship fourth quarter to see which team would come out of this game the champs.

After all the offense and versatility Mt Union showed in the first half, UMHB’s defense began to slow and wear them down.

UMHB took the ball to open the fourth and continued to move the ball downfield. A Purple Raiders defense that had all the answers in the first half, all of sudden had no answers. Hammack kept moving his team down the field and now it was his arm and legs getting it done.

A 12-play 80-yard drive was capped by a 16-yard touchdown pass from Hammack to K.J. Miller and the score was 24-13 Crusaders with 9:46 on the clock. At this point, it looked like the game was a lock for UMHB as momentum was now all theirs.

With the pressure now on them, the Purple Raiders took over the football. Fulford was once again showing his command of the offense moving his team down the field. A fantastic pass from Fulford that was misread by the UMHB defender, gave Mt Union a first and goal at the two. On third and goal from the four, a Fulford pass fell incomplete and Mt Union got a 21-yard field goal to make it 24-16 with 7:06 to play. Now all the Crusaders had to do was run the clock.

A huge third-down stop by the Purple Raiders defense gave them the ball back at the UMHB 41 after a failed fake punt. Many in the press box asked why this call was made when the Crusaders defense was up to the task the whole second half. All they had to do was run the clock out.

With the game on the line, the Purple Raiders began to move the ball down the field. On a big third-own from the UMHB 16, a Fulford pass fell incomplete and it was decision time. A fourth-down pass was overthrown and UMHB took over with only 1:06 left to a title.

With killing the clock being the only goal, UMHB somehow decided to throw the ball with a minute left in the game. A sack later, they had to punt the ball back to Mt Union with 50 seconds left. There was still time for a miracle.

The Purple Raiders took over at the UMHB 49 with 39 seconds left. But, after a huge sack, it was too little too late as time ran out. Mary Hardin-Baylor had avenged their loss last year to Mt Union and were once again champions of the DIII football world.

Both teams would finish with 303 yards of offense as well as nearly equal each other in time of possession and first downs for an evenly matched game.

QB, Jase Hammack had a strong second half and finished with 147 yards on 11-19 passing to go along with 54 rushing yards on nine carries. RB Markeith Miller would top the century mark with 101 yards rushing on 25 carries and a touchdown. Game MVP, T.J. Josey would account for 21 yards on the ground on four carries and get 78 yards on five catches with a big touchdown.