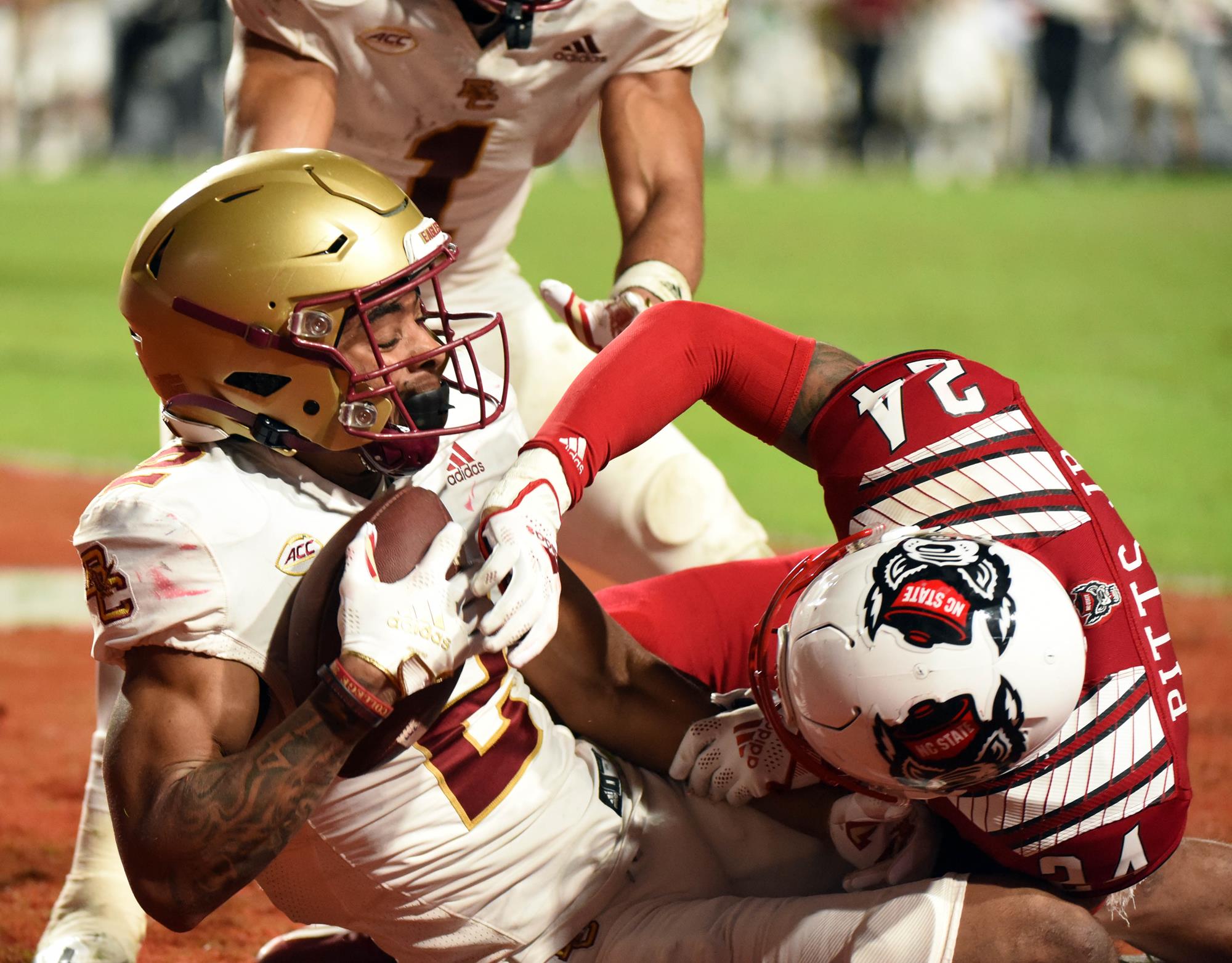 Emmett Morehead and Griffin connected on the two-yard scoring play after an N.C. State pass interference call on 4th down gave the Eagles a 1st-and-goal deep in the scoring area.  The Eagles began that final scoring drive with 2:47 left on their own 31-yard line and used 12 plays to drive 69 yards for the go-ahead score.

N.C. State got out to a 14-0 in the first quarter before Emmett Morehead connected with Zay Flowers on a 17-yard touchdown reception.  The score capped an eight-play, 75-yard drive and it was 14-7 with less than three minutes left in the opening frame.

The Eagles’ defensive unit shined in the second quarter, stuffing a Wolfpack scoring try with a formidable goal line with under six and a half minutes remaining in the half.  N.C. State tacked on a 30-yard field goal to make it 17-7 with 1:36 left in the second.  BC would drive deep into Wolfpack territory before a Morehead pass was intercepted near the goal line.  It would stay at 17-7 at the break.

After N.C. State recovered a muffed punt reception by BC, it extended the lead to 20-7, after Christopher Dunn drilled a 45-yard field goal with 11:11 left in the third.

Morehead and Flowers would connect again in the third on their second TD collaboration of the day – a slant route that Flowers took 35-yards to the house.  After Connor Lytton converted the point-after, it was 20-14 Wolfpack with 7:13 in the period.

On the next drive, N.C. State QB M.J. Morris fumbled and the Eagles’ Neto Okpala recovered at the Wolfpack 47-yard line.  But the BC would commit a turnover of its own to give it back to the Pack.  With 12 and a half minutes left, BC’s defensive efforts forced a turnover – Marcus Valdez forced a fumble and Vinny DePalma recovered to get the ball back for BC.  After a turnover on downs by the Eagles, Elijah Jones picked off Morris at the BC 28-yard line with six and a half minutes to play.

Morehead finished the game 29-for-48 for 33 yards and three touchdowns.  His top target – Zay Flowers – had a historic day for Boston College.  He finished with seven receptions for 130 yards and two scores.  His second catch of the day – a 15-yard completion in the first quarter – put him at the top of the Eagles’ record books, as the all-time leader in receiving yards.

Boston College travels to Notre Dame on Saturday, Nov. 19.  Kickoff in South Bend between the Eagles and Fighting Irish is set for 2:30 p.m. and the game can be seen live on NBC.