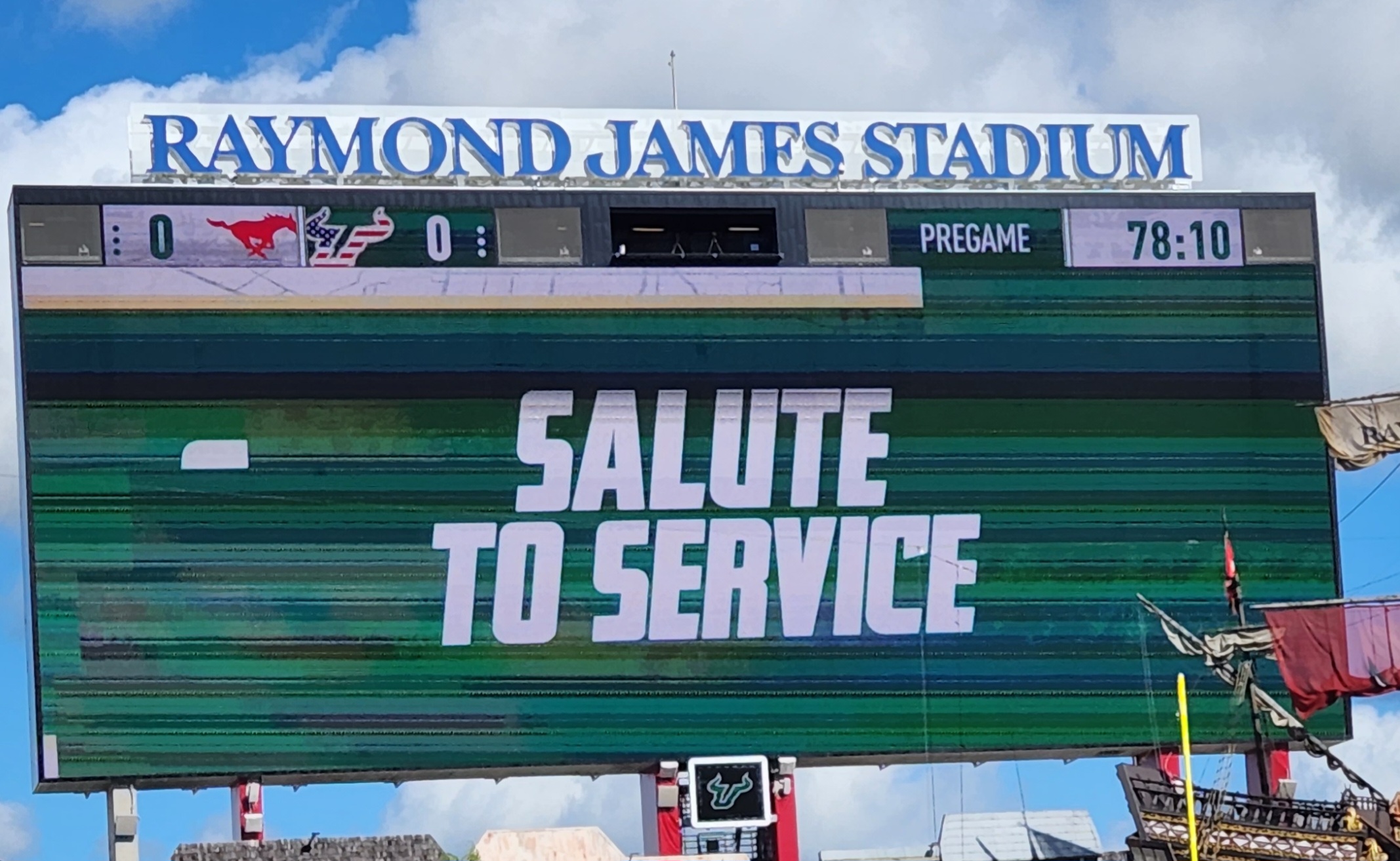 The USF Bulls finally returned home after a two-game road trip. Earlier in the week head coach Jeff Scott was fired. It will now be on the shoulders of special teams coach Daniel Da Prato. Being down on the field under very humid weather the player’s morale did not seem any different. Going up the media elevator with former USF Bulls player and Bulls announcer Sam Barrington he would like to see former head coach Jim Levitt come back. That big question is who will be the next coach at USF. The last game the Bulls played was a blowout loss to the Houston Cougars. The fans want to see what the team can do with three games left in the season. Could we see a much more motivated team than the one that quit under Jeff Scott?

The SMU Mustangs won the toss and elected to receive the ball. The Mustangs ran a hurry-up offense. On the first Bull’s defensive drive, they were able to cause the Mustangs to turn the ball over on downs. SMU scored an early touchdown and led the game 7-0. Toward the end of the quarter, the Mustangs got a field goal and took the lead 10-0. At the end of the first quarter, it was SMU with the lead.

To start the second quarter, USF had a nice sustained drive that led to a touchdown and cut the lead to 10-7. It was the first touchdown for running back Jason Albritton. The Mustangs quickly answered on their next offensive drive and went up by 10,17-7. The USF Bulls narrowed the lead on a 32-yard pass caught by Xavier Weaver to make it 17-14.

The USF Bulls had a big special teams play as the Mustangs missed a 53-yard field goal attempt near the end of the half. Spencer Shrader tied the game at 17 right before the half with a 42-yard field goal. SMU stopped USF on their first drive and took it down and scored and retook the lead 24-17. The Mustangs, with another big play, a 70-yard touchdown pass to Jordan Kerley pushed the lead to 31-17. The avalanche of the USF on offense spurred and the Bulls fell behind 38-17 at the end of the third quarter. The Bulls drove down trying to get closer but a pass was intercepted by SMU. It looked like the Bull’s defense was running out of gas. That has been the problem most of the season. USF seems to have issues with playing complete games.

Midway through the final quarter, SMU took the turnover and converted a 45-yard field goal to take the lead 41-17. The stadium was very quiet as quarterback Katravis Marsh got hurt and had to be carted off the field but showed movement with their hands and feet. Bryum Brown took over as quarterback for the USF Bulls. As the quarter and game winded down, the Bulls got a touchdown, went for a two-point conversion, and missed to make it 41-23, which was the final score. This game was close in the first half and the USF Bulls will have to hope that Marsh isn’t too hurt as the final two games are on the horizon. The final road game is next week against the Tulsa Golden Hurricanes.