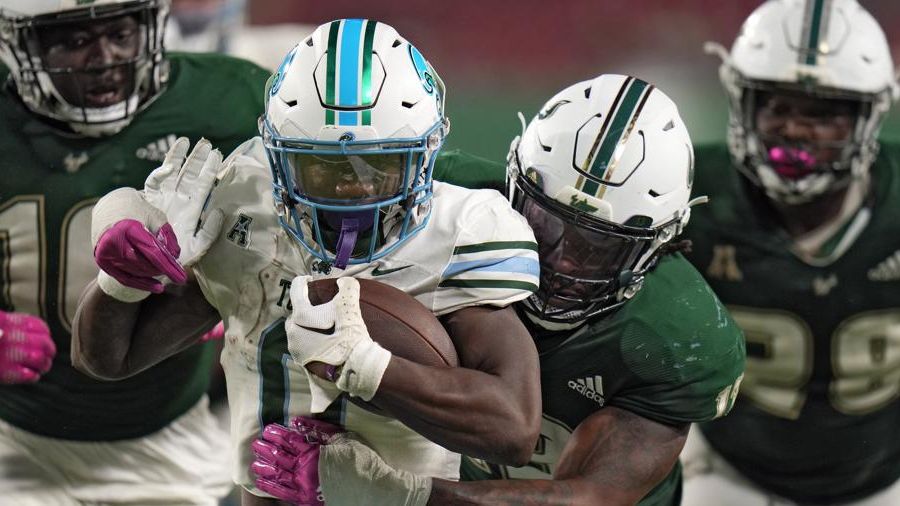 Under an overcast sky with a small chance of rain, it was the 2022 homecoming game for the USF Bulls. They welcomed in the Tulane Green Wave. Many experts said that the Green Wave may be the best team in the AAC this year. They only have one defeat on their schedule and that was against the Southern Miss Eagles by just a field goal. The biggest win for the Green Wave was beating the Houston Cougars by three points in overtime. The crowd was few and far between, with not many fans for either team. Tulane won the coin toss and deferred to the second half. The Bulls are coming off a near win over the Cincinnati Bearcats which many had pegged to win another AAC championship in 2022. The Green Wave will play the Bearcats at the end of the season.

One of the keys in the game was whether the USF Bulls’ defense could stop the high-powered Tulane offense. Also, could the Bulls score points when they had the ball? The first drive for both offenses went like this: the Bulls went three and out but their defense held the Green wave to just a field goal. Despite a turnover on the Bulls’ second position they held Tulane to no points on a missed field goal. On the Bulls’ third possession they would cash in for an eight-yard touchdown pass to Jimmy Horn Jr. At the end of the first quarter, the USF Bulls led 7-3. The Green Wave would answer quickly with a Michael Pratt touchdown run. But the Bulls answered right back quickly with a 33-yard touchdown run by quarterback Garry Bohanon that put the Bulls in the lead 14-10.

Midway through the second quarter quarterback Garry Bohanon got hurt, and Katravis Marsh came in to replace him. For the most part, both of those questions were answered with yes. It was not the greatest way to end the first half with a bad holding penalty which would result in a Tulane Green Wave touchdown which gave them the lead of 17-14 at the half. The USF Bulls now have a huge question at quarterback if Bohanon does not return. Two dumb penalties resulted in Tulane extending their drives. The hope was that the Bulls could make adjustments in the second half. They were able to make some key stops on defense and scored on offense mixing up the run and pass. Marsh will have to be ready and continue to move the USF offense.

Coming out in the second half the USF Bulls’ defense made a big stop on the Green Wave on fourth down. The Bulls had a good offensive drive near the end of the third quarter which tied the game at 17. The defense stood strong. That was until Tulane got a 75-yard run that resulted in a touchdown and put them ahead 24-17. On the next drive, Tulane got a turnover, ran the wildcat, and went up 31-17. It got sloppy near the end of the quarter. The defense again stepped up and got a sack and turnover. It led to a USF Bulls touchdown which pulled them within seven points 31-24. That is the way that the third quarter would end as the Bulls seemed to get the momentum back. The Bulls looked to take the momentum and tie the game.

Tulane answered the USF Bulls touchdown very quickly and retook a 14-point lead, 38-24. The Green Waves’ next drive resulted in another touchdown and put them up 45-24. It looked like the defense ran out of gas. After Bohanon left, the Bulls struggled at times on offense. As many media members say this is one of the games that could once again be classified as what would have happened had Bohanon not gotten hurt. The Bulls have been hit hard by injuries. This game showed that and now USF will head to Houston in two weeks to play the Cougars. They have not played well against the Cougars in the last few years. With just over four minutes to go the Bulls got a 73-yard touchdown pass that brought the score to 45-31. That would be the final score and end another close game for the Bulls.