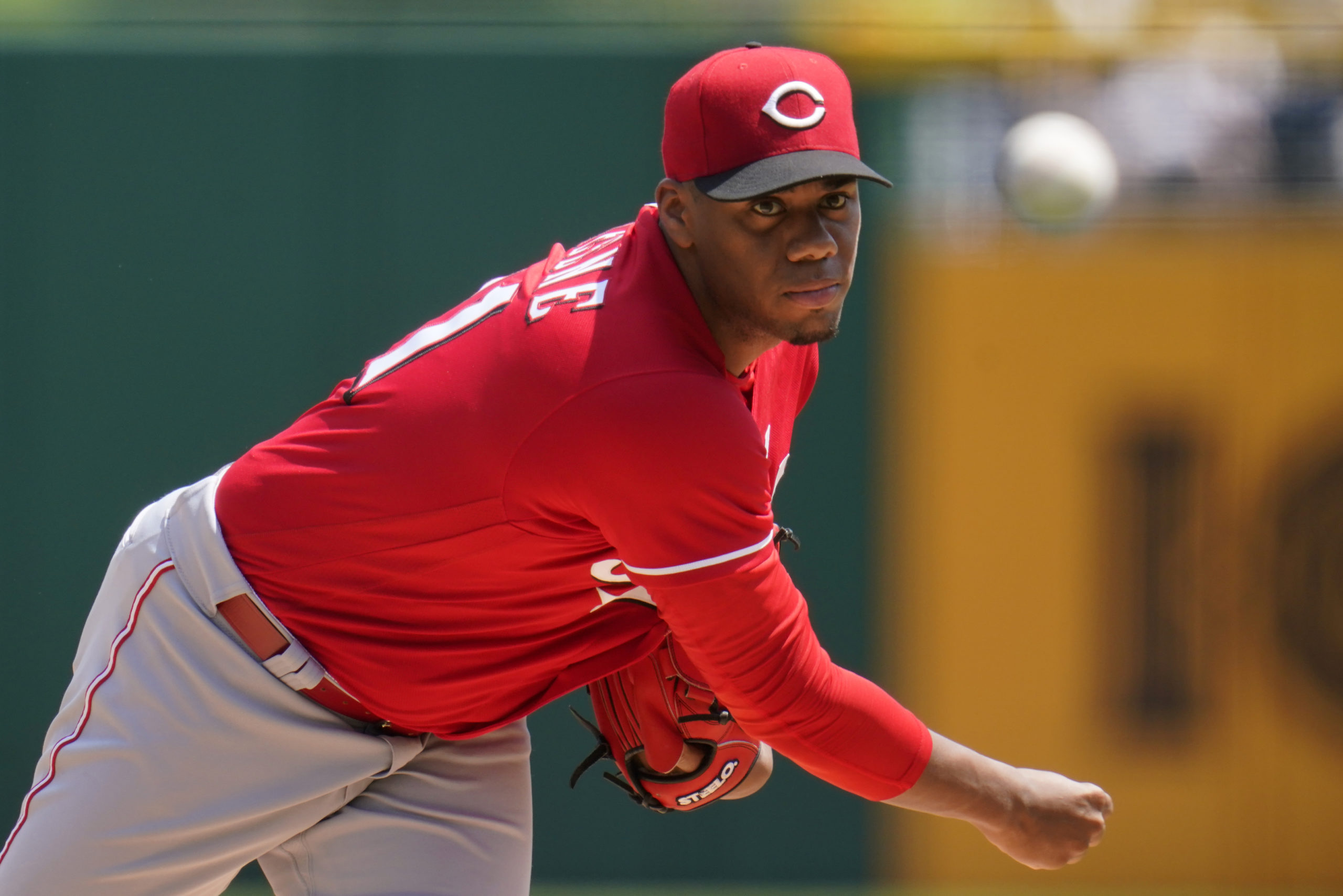 Fantasy baseball is a confusing game to play. With MLB rosters starting so many good players it’s tempting to just pick a name out of a hat after the Juan Sotos of the league have already been drafted to a roster. If you’re having trouble figuring out which players to pick up this week to round out your roster, then look no further.

Hunter Greene is a Reds starter with near-unrivaled talent (see that crazy talent below). Admittedly, he has put together a couple of bad starts to start the season. However, he very recently put in a masterpiece for the Reds with seven no-hit innings this past Sunday. A masterpiece that he took a loss for. For the first time in MLB history, a team lost when their pitchers threw a no-hitter. Knowing that achievement, it would be hard to trust any Reds starters to turn in value with so little offensive support, but if I had to bet on anybody on this Reds team I would bet on the talent of Hunter Greene. Plus, the Reds can’t be this bad for too long, right? He warrants a feeler at the least to see if he can put together more good starts

Luke Voit could never seem to put together a full season during his time on the Yankees but when he could make it on the field, he played exceptionally. Fans should recall the shortened 2020 season where he led the entire majors in home runs with 22. While he has struggled in his first games with the Padres this year (.175 average), his OBP is right around .300 and his walk percentage of 15% is some of the best numbers of his career. With those walk numbers, Luke Voit is definitely not going to hurt your lineup and he can definitely put in big performances like the one he just put up against the Cubs on May 11th (3/5, 3 runs, 2 RBIs). With a Padres team that’s destined to be in a long fight for playoff positioning in a stacked NL West, Voit could pay dividends for the entire season if he can perform similarly to his Yankees years. Give Voit a chance and add him to your lineup if you can.

Joe Barlow is on quite the tear as the Rangers closer. He has turned in a save in 7 of his last 8 appearances which brings you crazy fantasy value. The best part, he is only rostered in only 44.5% of fantasy leagues. That is a rostered rate below 50%, for a guy with an ERA in the 1s and seven saves in the last month! I beg of you to pick Barlow up for your fantasy team before it’s too late.

Fallers to trade for

After becoming the third pitcher in MLB history to surrender 5 homers in an inning, Nathan Eovaldi’s spot on fantasy rosters has come into question. Turning in a -20 performance as a starter is back-breaking for most and many may be looking to offload Eovaldi. I wouldn’t jump to conclusions about his performance. Facing the brick wall that is the Houston Astros is never easy and pitchers often get blown up by Houston’s murderer’s row. In my mind, I can’t see the Red Sox SP1 ever putting up a game as bad as his latest. If you strike now, you could get Eovaldi at a real bargain.

Grandal has had a horrible start to the season with a scary .163 average. Despite this struggle, he has started nearly every game this season. Grandal has a proven track record and is going to consistently give you a guy to slot in at catcher, so once the hits inevitably start rolling in, you’ll feel a lot better about his performance. While fantasy managers, by and large, haven’t given up on him yet (88.6% rostered) they are surely not happy with the production. It would be beneficial to lowball a trade for the former all-star if your catcher spot is looking a little weak.

After a blistering start to the season, Rizzo has cooled down considerably and is in quite the slump. He’s been hitting only .140 over the past two weeks after starting out the season hitting .273. The home run hitting that fueled his productive April (9 home runs) has bottomed out completely this month as Rizzo recorded his first of the month just yesterday. His value has dropped significantly, so some may be tempted to swing a trade for the Yankees’ 1st baseman. Anthony Rizzo hasn’t hit 30 home runs since his prime in 2017. At this point, Rizzo’s April is looking like a fluke from the aging slugger. At the least, I’d recommend holding off on trading for Rizzo until you see more signs of life.

How the man hitting behind Vladimir Jr, Bo Bichette, and George Springer has only put up 7 RBIs is beyond me. After a breakout all-star year in 2021, most expected Hernandez to play well this season. That’s clearly not been the case as he’s hitting below the Mendoza line with only 2 HRs and 7 RBIs. At this pace, Teoscar Hernandez is coming nowhere close to the 116 RBI numbers he put up this last season. However, this all makes Hernandez an incredibly tantalizing fantasy addition. It’s so genuinely unusual that Hernandez is playing this bad after last year. For that reason, we all assume that there’s just something in the air messing him up and that we could get the steal of the year if we just give up a mid-tier starter. I would mostly agree with this line of reasoning but be careful not to overpay for Hernandez.