Mancini, Eagles Take Down No. 18 Irish in Series Opener 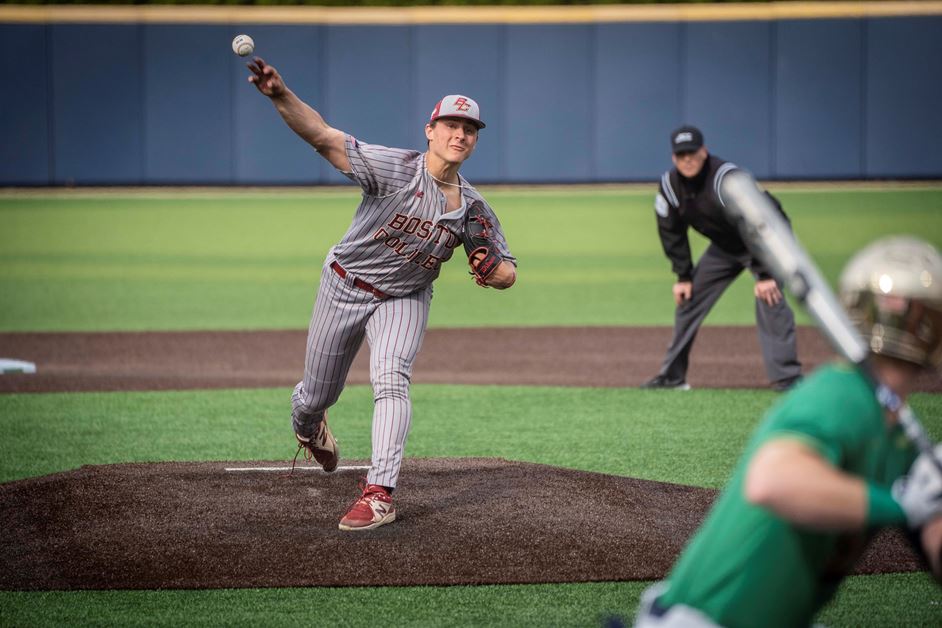 NOTRE DAME, Ind. – The Boston College baseball team opened its series against No. 18 Notre Dame with a 7-4 victory at Frank Eck Stadium on Friday night. The Eagles got seven innings of one-run ball from senior right-hander Joe Mancini (Fairfield, Conn.) and backed him with a four-run fourth and three-run fifth.

Mancini and ND lefty John Michael Bertrand put up matching zeroes through the first three innings, with Bertrand perfect against the Eagle lineup. Junior center fielder Barry Walsh (Sterling, Mass.) broke the tie with a leadoff-home run in the fourth. BC made it 4-0 with a three-run homer to right of the bat of sophomore right fielder Cameron Leary (Bethpage, N.Y.); his 14th of his season.

The Irish (26-10, 11-8 ACC) got a run back in the bottom of the fourth, but the Eagles (17-26, 4-18) responded with a three-run fifth. Sophomore designated hitter Travis Honeyman (Massapequa, N.Y.) singled in a run, and sophomore first baseman Joe Vetrano (Shrub Oak, N.Y.) hit an RBI double to the base of the wall in right-center.

Notre Dame appeared to have cut into the Boston College lead with a pair of runs in the sixth, but both were wiped off the board upon replay review. With the bases loaded and one out, Mancini threw home on a groundball to get the force. After the putout, the throw to second went wide; allowing two runs to score. BC challenged the call and it was determined that the runner interfered; ending the inning and negating the runs.

Mancini (3-3) got the win in seven innings; his third straight start of seven innings. He allowed one unearned run and worked around 10 hits and one walk while striking out two. Bertrand (6-1) took his first loss of the season in a four-inning start. He was lifted with nobody out in the fifth and charged with six runs on six hits with four strikeouts.

With three runs in, one on and one out, graduate right-handed closer Brendan Coffey (Saratoga Springs, N.Y.) entered as the second BC reliever of the eighth. He allowed a single to bring the tying run to the plate but struck out the next two batters. Coffey remained on for the ninth, working around a two-out single, to earn his fourth save of the season.

BC HIGHLIGHTS
·       Walsh led off the top of the fourth with a home run to break a scoreless tie.
·       Leary followed in the fourth with a three-run homer.
·       The Eagles added three runs on three hits in the fifth to stretch their lead to 7-1.

UP NEXT
Game two is Saturday at 1 p.m. on ACC Network. Graduate right-hander Henry Leake (Burbank, Calif.) goes to the hill for the Eagles.