BC Bird Ball: Eagles Hold on to One-Run Win Over Miami 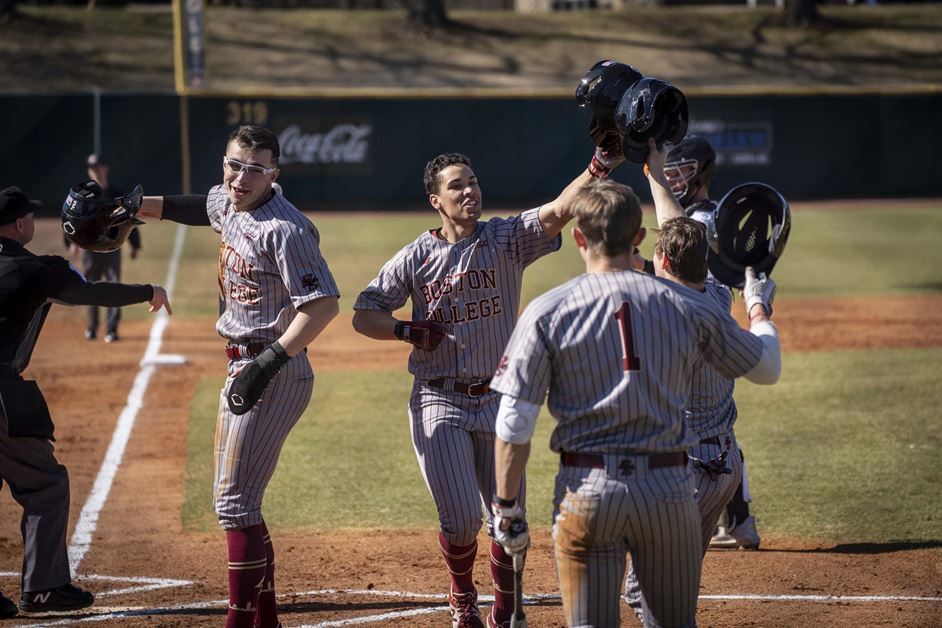 CORAL GABLES, Fla. – The BC baseball team hit four home runs in its ACC opener and held on for a 12-11 win over Miami at Mark Light Field on Friday night. The Eagles moved their overall record to 6-6, while the Hurricanes fell to 9-4.

BC led 12-6 heading into the last of the ninth. Miami had three hits and a run in before a pitching change and the first out of the inning was recorded. Three straight hits cut the lead to two and the Eagles traded a run for an out on a sacrifice-fly that trimmed the lead to one with two away and put the tying run on third. Graduate righty Henry Leake (Burbank, Calif.) then shut the door on a strikeout.

Sophomore right fielder Cameron Leary (Bethpage, N.Y.) and junior second baseman Luke Gold (Ballston, N.Y.) each homered twice. Gold gave BC an early three-run lead with a three-run blast in the top of the first. Leary homered in back-to-back at-bats in the second and fourth innings before Gold launched his second of the night in the sixth.

Leary finished the game 4-for-4 with two doubles, five RBI, three runs, and a walk. Gold went 4-for-5 with a double, four RBI, and three runs.

The Eagles used four pitchers, all of whom gave up two or more runs. West (1-1) claimed the win with two runs on two hits and a walk in 1.2 innings.

Palmquist (3-1), who had allowed just two runs in his first three starts, was knocked around for 10 runs, nine earned, on nine hits, and four walks with just two strikeouts.

BC HIGHLIGHTS
·       Gold staked BC to a three-run lead with a home run down the left-field line in the first.
·       McNulty hit a leadoff single in the second and came all the way around to score after the ball was kicked in right field.
·       Leary lifted a three-run home run to left to make it 7-2 in the second inning.
·       Walsh went up and brought back a potential three-run home run in center field to end a threat and preserve a three-run lead in the third.
·       In the fourth, Leary hit his second home run of the night; this one off the scoreboard in left field.
·       Honeyman beat out a two-out, infield single to short in the fifth and scored on a Leary double.

UP NEXT
Game two of the series is Saturday at 7 p.m. on ACC Network. Freshman right-hander Sean Hard (Mahwah, N.J.) goes to the mound for the Eagles.