BC falls to Miami at buzzer in OT in ACC Quarterfinals 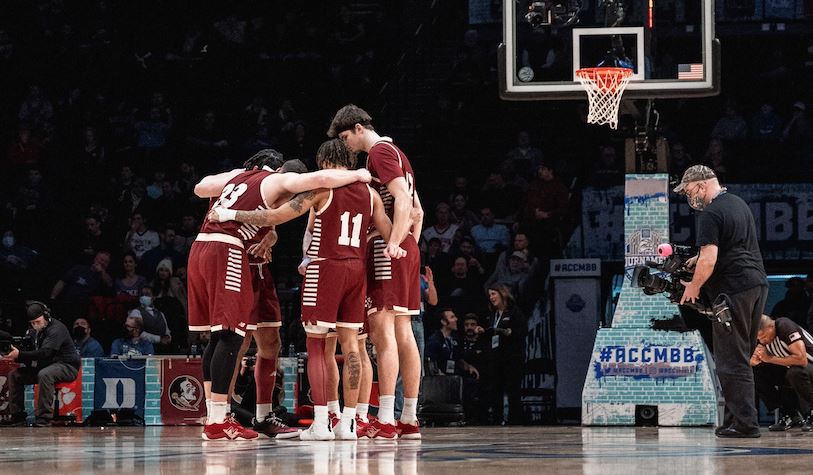 BC Eagles Season Concludes with First ACC Quarterfinal run since 2018

NEW YORK (AP) Jordan Miller scored on a transition layup as time ran out in overtime to give fourth-seeded Miami a 71-69 win over 13th-seeded Boston College in an Atlantic Coast Conference tournament quarterfinal Thursday.

BC took possession with 33.7 seconds left in overtime but Makai Ashton-Langford’s shot in the paint was short. Sam Waardenburg grabbed the rebound and passed to Charlie Moore who hit a streaking Miller for the game-winner.

BC almost won in regulation after Brevin Galloway stole the ball and saw his heave from beyond midcourt hit the front of the rim, sending the game into OT tied at 65. Galloway scored BC’s four overtime points but missed a free throw before the Eagles missed their final five shots.

The Hurricanes, who beat the Eagles by 11 points eight days earlier, escaped to earn a semifinal matchup with top seed and seventh-ranked Duke on Friday.

Kameron McGusty scored 16 points, Moore had 15 points and six assists, Isaiah Wong 15 points, and six assists, and Miller 13 points for Miami (23-9), which had a double-bye into the semifinals. Waardenburg grabbed a game-high nine rebounds to go with nine points.

Quinten Post scored 14 points, Galloway 12, Jaeden Zackery 11, and DeMarr Langford and James Karnik 10 each for the Eagles (14-18), who were playing their third game in three days including consecutive overtime contests.

Miami led 34-32 at halftime. Consecutive baskets by Karnik and a 3-pointer by Zackery gave the Eagles a six-point lead early in the second half. BC held on to that lead for nine minutes until three turnovers led to six points in a 9-0 Miami run and a five-point edge with four minutes to go. Zackery’s 3-pointer with 22 seconds left made it 65-all.