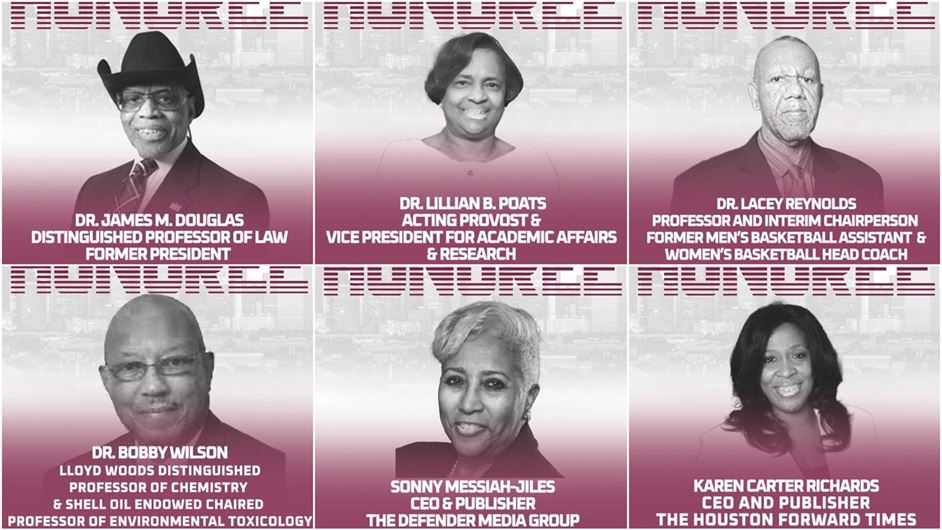 The Texas Southern Department of Athletics will honor four TSU legends and a pair of longtime Houston area media trailblazers during next Saturday’s (March 5) basketball contest versus Prairie View A&M.

“These individuals we’re going to honor has had a direct influence in shaping the narrative of TSU across all avenues for decades,” said TSU Vice President for Intercollegiate Athletics Kevin Granger. “It’s an honor to recognize them for their service, dedication, and commitment in ensuring Texas Southern remains at the forefront.”

Dr. Poats has worked at TSU for 33 years and is a two-time graduate of TSU. She currently serves as the Acting Provost & Vice President for Academic Affairs & Research and has also served as a faculty member in the Department of Educational Administration and Foundations in addition to serving as Associate Dean and Director of Certification at TSU. Dr. Poats has also held positions at Texas Medical School of Houston, Department of Defense, and her alma mater, Purdue University. She’s also active in numerous community initiatives in the Houston area and a sought-after presenter in the academic sector.

“TSU has really been my lifeline as I’ve been there for 33 years and worked as a staff member, faculty member, and administrator. It has been a very wonderful experience,” she said. “I’m excited to be honored amongst the Mount Rushmore of TSU greats.”

Dr. Douglas has been associated with TSU for 60 years as a student, faculty member, and administrator. Dr. Douglas currently serves as the Distinguished Professor of Law in the Thurgood Marshall School of Law while also serving as TSU’s President, Vice President, Provost, and Thurgood Marshall School of Law Dean throughout his career. He’s a former president of the Houston Chapter of the NAACP and has also served as a professor of law at Northeastern, Syracuse, Florida A&M, and Cleveland State. Dr. Douglas is a well-respected historian and an active contributor across several media outlets across the Houston area. He also serves as a board member for a variety of organizations in Houston ranging from the educational, business, social and legal sectors.

“Texas Southern has meant everything to me,” said Douglas. “I’m a graduate of TSU and it has been part of my life since I was 12-years old. It’s who I am. It feels great to be honored by TSU because TSU has been such an important part of my life.”

Dr. Wilson is a nationally regarded research chemist, Distinguished Professor of Chemistry and Shell Oil Endowed Chaired Professor of Environmental Toxicology, and a former Provost and Vice President for Academic Affairs at TSU. Dr. Wilson has played a huge part in encouraging and mentoring African-Americans to pursue a career in chemistry on the highest level as 1/3 of African-American students who hold a doctoral degree were his students. He’s served as Director of the National Science Foundation and has received several lifetime achievement awards in addition to numerous community organization awards. Dr. Wilson, who was instrumental in establishing the Environmental Toxicology Program as TSU’s first Ph.D. program in 1994, has generated over $100 million dollars in research and training grants during his 45-year association with TSU.

Dr. Lacey Reynolds is currently a Professor and Interim Chairperson in the Health and Kinesiology at TSU and a former men’s basketball assistant and women’s head coach at TSU. Dr. Reynolds is best-known as one of the top basketball recruiters to grace the SWAC as he had a direct hand in the success of the TSU men’s basketball program with five regular-season titles and three NCAA tournament appearances. Reynolds, who was the top assistant under legendary head coach Robert Moreland, is personally responsible for securing the signatures of some of the top men’s players in TSU history. Reynolds also spent several years as head coach of the women’s basketball program in addition to serving as head coach at Grambling State and Mississippi Industrial College, where he was one of the youngest head coaches in the nation at 23. Reynolds, who always had dual roles in the classroom and athletics while coaching at TSU, transitioned to the classroom full time once he stopped coaching and continues to coach up the next generation of students on the administrative level.

“TSU has impacted my life over the past 35 years as a coach, teacher, and friend as TSU is part of my family. I feel very proud what I’ve accomplished by me as a teacher, coach, instructor, full professor, and doctoral student,” he said. “I’ve been here for two stints and I’m excited to be recognized by Mr. Granger and his team for giving me this opportunity. He was my point guard and to see one of your own doing well makes me proud because I know his story from when I recruited him from Scooba, Miss. I’m happy and can go on and on about this honor.”

Sonny Messiah-Jiles has been at the helm of the Defender Media Group (formerly the Houston Defender) for 42 years. A former TSU Athletics Employee, Messiah-Jiles has built the newspaper into one of the most well-respected publications in the nation as the publication is one of the few outlets in the city of Houston to cover TSU prominently. Messiah-Jiles’ success in the newspaper industry has propelled her to prominent positions such as the chairperson of the National Newspaper Publishers Association, the first African-American female board member of the Greater Houston Partnership, and numerous advisory board positions across Houston. Messiah-Jiles received the Houston Association of Black Journalists Trailblazer Award and was inducted into the Houston Women’s Chamber of Commerce inaugural Hall of Fame.

“I’m truly honored to have this tribute to myself and the Defender,” said Messiah-Jiles. “Texas Southern has been part of my educational history as I’ve worked on my MBP there in addition to working there as a Sports Information and Marketing Officer. TSU has been with me for at least 40 years as a publisher so it’s a tremendous honor to come full-circle as TSU has been a pillar for black history in its service to the community.”

Karen Carter Richards is a second-generation owner of the Forward Times Publishing Company, Inc., a multimedia company that publishes weekly, and is the largest Black-owned and independently published newspaper in the southern region. The newspaper, which was founded in 1960 by her parents the late Julius P. and Lenora “Doll” Carter, has played an integral role in documenting the success of TSU Athletics for nearly seven decades. She continues to spread her parent’s legacy with the establishment of The Julius and Lenora Carter Scholarship & Youth Foundation” which supports students by granting scholarships and internships to those who aspire to have a career in journalism and communications. She has also received numerous awards from various organizations in Houston while also serving on the Board of Directors for Greater Southeast Management District and the Houston Texans YMCA. Carter Richards also is the chair of the National Newspaper Publishers Association (NNPA).