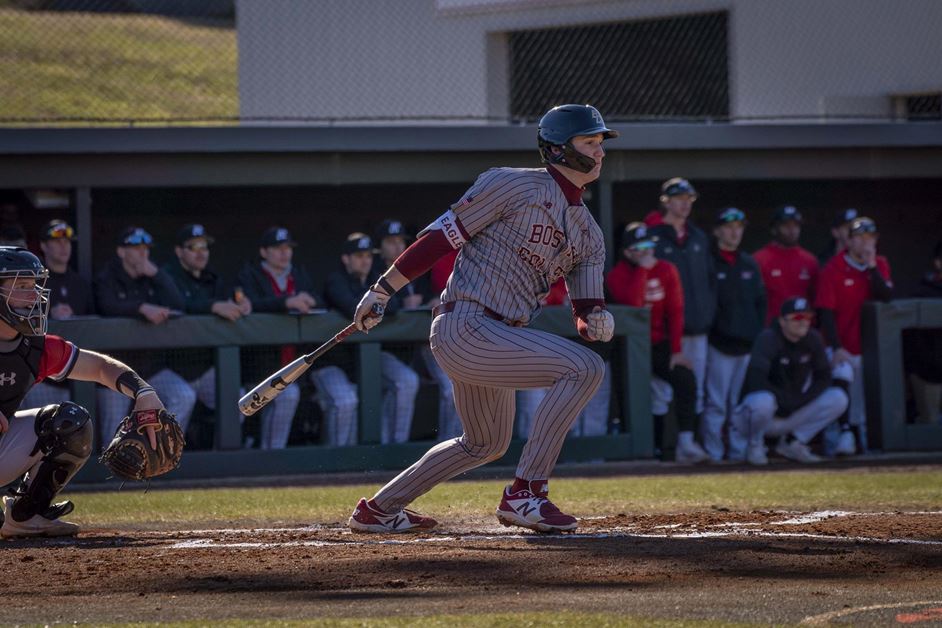 CLINTON, S.C. – The Boston College baseball team earned a 7-6 win over defending Big South champion Presbyterian at the PC Baseball Complex on Friday afternoon. The Eagles, who gave up just four hits on the day, evened their record at 2-2, while the Blue Hose dropped to 2-3.

Sophomore first baseman Joe Vetrano (Shrub Oak, N.Y.) went 4-for-5 and drove in three runs, including the go-ahead run in the top of the seventh. Vetrano got the scoring started in the first inning with a two-run, two-out home run. He scored twice and added a double.

BC built a 4-0 after two with a second two-run home run as freshman Sam McNulty (Cambridge, Mass.) went deep on the first swing of his collegiate career. Presbyterian got back into the game with three unearned runs in the bottom of the third. The Blue Hose then took advantage of four free passes to score three runs and chase senior right-hander Joe Mancini (Fairfield, Conn.) in the fourth and take a 6-5 lead.

Mancini went 3.2 innings in the start with six runs, only three earned, on just two hits, but walked four and struck out one. Freshman right-hander Julian Tonghini (New Canaan, Conn.) got the win with 1.2-scoreless innings of relief. Graduate RHP Henry Leake (Burbank, Calif.) earned a 1.2-inning save; retiring all four batters faced.

Lefty Charlie McDaniel went six innings in the start for PC. He gave up six runs, five earned, on nine hits to no walks with three strikeouts. RHP Luke Matthews (2-1) went the final three frames and took the loss with one run against three hits and a walk.

BC HIGHLIGHTS
·       The Eagles rallied with two down in the first and brought in two runs on a Vetrano home run to center.
·       BC added two more on a home run over the scoreboard in left from McNulty on the first swing of his career.
·       Trailing 6-5 in the fifth, Vetrano ripped a leadoff double and scored the tying run on an RBI-groundout off the bat of Burns.
·       Vetrano put the Eagles back in front in the top of the fourth on his fourth hit and third RBI.
·       Travis Honeyman made a diving catch in foul territory down the left-field line on the leadoff hitter in the seventh.
·       With the potential tying and go-ahead runs aboard, Leake entered and got an inning-ending double play on his first pitch in the eighth.

GAME NOTES
·       The game marked the first-ever match-up between Boston College and Presbyterian.
·       McNulty (shortstop) and Patrick Roche (third base) each made their first career start.
·       Making his collegiate debut, McNulty hit his first career home run.
·       Vetrano hit his second home run of the season.
·       Vetrano was the first Eagle with four hits in a game since Luke Gold against Miami (5/2/21).

UP NEXT
The Eagles are in action twice on Saturday beginning at Noon against George Mason followed by a game against the host USC Upstate in Spartanburg. Freshman right-handers Eric Schroeder (Ridgewood, N.J.) and Sean Hard (Mahwah, N.J.) will toe the rubber in the doubleheader for BC.