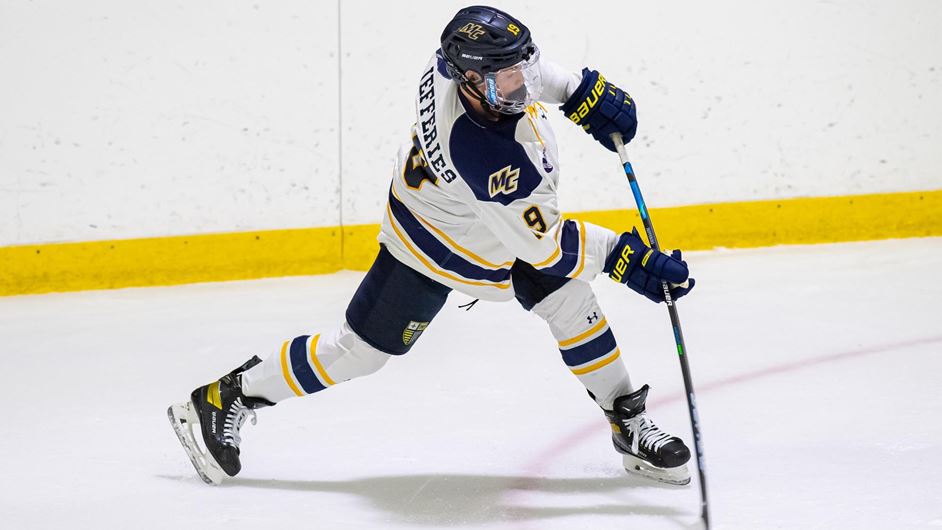 With just five games left in the Hockey East regular season, the push is on to secure a playoff spot in the league. For the Merrimack Warriors (11-9-0, 16-12-1), they hosted Vermont for a weekend series. Their position seems to be pretty good to not only play in the playoffs but also to host a possible first-round matchup. Vermont (4-12-3, 6-20-2) on the other hand, is looking to stay out of the basement in the league. As they began play on Friday night, they had a two-game lead in the loss column on Maine.

The first period was an up and down affair for the first ten minutes. Each team would hit a post, first Merrimack forward Mac Welsher would knife his way through the Catamounts defense and ring the pipe behind goaltender Gabe Carriere. Vermont did the same thanks to Will Zapernick off of a one-timer that hit the crossbar in the back of Warrior netminder Hugo Ollas. The Catamounts opened the scoring with an unassisted goal from Will Zapernick at 11:55 of the first. It was the first of four goals scored in the second half of the period. Warriors came right back with Ben Brar redirecting a shot by Carriere for his 10th of the season at 14:29 from Zack Vinnell and Jake Durflinger 1-1. Vermont responded seconds later with a shorthanded goal by Jacques Bouquot that was also unassisted at 14:35. Merrimack returned the favor in the final minute of the first. Liam Walsh tied the game at 19:22 with help from Zach Uens and Declan Carlile. The late period goal was Walsh’s eighth of the year. It was a 2-2 game after one.

The Warriors began period two shorthanded but had little problem killing it off. The pace of the game continued to be fast as the second reached the five-minute mark. Vermont had a golden opportunity off a 3-on-1 break but Joe Leahy’s shot was stopped by Ollas. Halfway through the game, it was still tied at 2-2 with Vermont having a slight lead with shots on goal at 19-13. Vermont would kill off a late second frame penalty and the teams went to their dressing room with the game still tied at 2-2 heading to the third.

Merrimack broke the tie early in the third. Alex Jefferies, on a hustle play, beat everyone down the ice to pick up a loose puck and beat Carriere over his shoulder to give his team the lead at 1:13. The goal was Jefferies’ 7th of the season. The assists went to Max Newton and Carlisle, his second helper of the game. It was Carlile’s cleaning pass that set up the chance.  Merrimack’s defense was stellar from then on. Vermont pulled their goalie with under two minutes to play, but it did matter. The Warriors picked up their seventh one-goal win of the season, 3-2 over Vermont.

After the game, Warriors head coach Scott Borek called the game a “hard-fought game.” He was impressed with the way his defense and forwards played after they got the lead. On the game-winning goal by Jefferies, the coach said “it was a great play.” The two teams meet again on Saturday night at Lawler Rink.