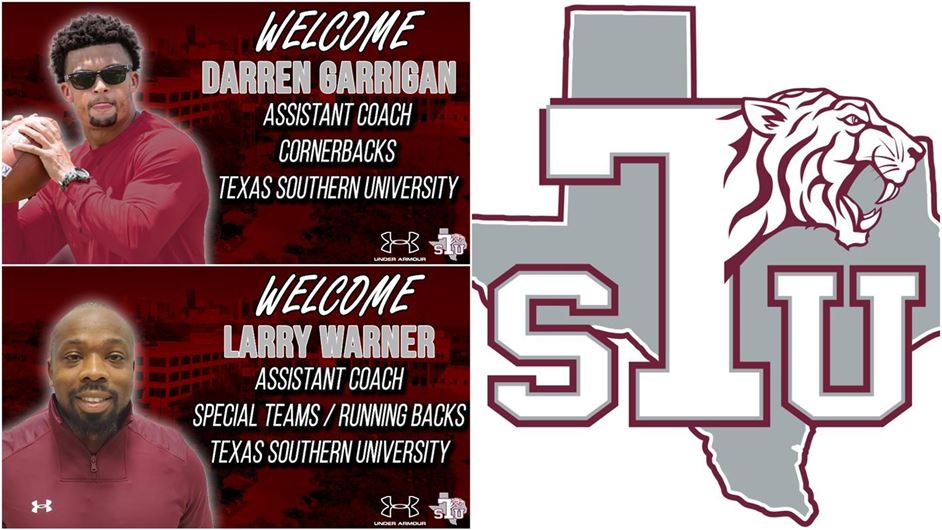 DARREN GARRIGAN
CORNERBACKS (Full Bio)
Darren Garrigan begins his first season coaching cornerbacks at Texas Southern. Garrigan joins the TSU staff after a four-year stint at the University of Incarnate Word in San Antonio. Garrigan has plenty of championship experience as a player and a coach with a total of nine rings as either a coach or player.

As a coach, Garrigan has five from his past two stops as a member of an NCAA Division II National Championship staff at Texas A&M-Commerce along with winning a pair of FCS Southland Championships at Incarnate Word. At UIW, the Cardinals won a pair of Southland Conference Championships and made two appearances in the FCS Playoffs during Garrigan’s four-year tenure at UIW. Garrigan joined the staff as the cornerbacks coach in 2018 and was elevated to pass game coordinator/defensive backs coach while also serving as the camp’s coordinator and the NFL Liaison for the Cardinals.

Prior to UIW, Garrigan spent four seasons as the secondary coach at Texas A&M Commerce. In four seasons, Garrigan tutored a secondary that was not only at the top of the Lone Star Conference but was also one of the top in the country. He helped produced 14 all-conference players, three all-region players, one LSC Defensive Back of the Year, and one All-American. In four seasons, the Lion defense intercepted 71 passes, caused 185 pass breakups, and scored 12 defensive touchdowns.

The Dale City, Va. native also served as an assistant at East Central University where he spent two seasons as the Tigers’ secondary coach. In both 2012 and 2013, Garrigan helped the Tigers lead the conference in takeaways, ranking in the top 15 nationally.  Garrigan was also the defensive coordinator of the D2 vs. NAIA All-Star Game in 2013.

As a player, Garrigan was a two-year starter at defensive back for West Texas A&M, where he was part of Don Carthel’s first recruiting class. He helped lead the Buffaloes to the Lone Star Conference championship in back-to-back seasons (2005-06) and was 21-4 during that span. Prior to West Texas A&M, he played football at Lackawanna College where he was a preseason All-American and was team MVP for his sophomore season (2004). Following his time at WT, Garrigan played two seasons in the arena league for the Alabama Vipers and was a starting member of the Vipers’ league-championship squad in 2008. He also had a short stint in the CFL.

A native of Dale City, Va., Garrigan earned his associate’s degree in business studies from Lackawanna College in 2005. He earned a bachelor’s degree in psychology from West Texas A&M in 2009 and a master’s in sports administration from East Central University in 2013.

Warner arrives at TSU after a two-year stint at Arkansas-Pine Bluff where he also served as running backs coach during UAPB’s spring and fall campaigns. During the historic spring campaign, Warner made an immediate impact on special teams as UAPB was one of the top teams in the nation in both kick and punt return average. UAPB was only one of two schools in the SWAC to score a touchdown in both kickoff and punt returns while also ranked second in the FCS in kick return yardage and fifth in punt returns. UAPB also led the nation in blocked punts during the spring season. During the fall of 2021, UAPB carried over the success as they finished third in the SWAC in kickoff returns while being one of only two teams to score multiple touchdowns on punt returns. In the backfield, UAPB’s Kier Crossley tied for third in the SWAC with seven rushing touchdowns.

Prior to UAPB, Warner spent three seasons as running backs coach at the University of South Alabama (2018-20) and worked with kick returners on special teams. Warner helped Tra Minter become just the second All-American in program history — earning honorable mention recognition from Phil Steele Publications — as an all-purpose back after leading the Sun Belt Conference and ranking second nationally with an average of better than 160 yards per game.

Prior to South Alabama, Warner worked in the same role at Central Arkansas during the 2016 and ’17 campaigns.  During that time, his efforts helped the Bears go 20-4 overall and 17-1 in the Southland Conference as UCA qualified for the NCAA Football Championship Subdivision playoffs both seasons highlighted by a win in the first round in 2016. In his last year with the Bears, Warner helped the team’s top two running backs combine for more than 1,600 yards and 13 touchdowns as Carlos Blackman picked up second-team all-Southland Conference honors and Kierre Crossley was chosen honorable mention all-league.  Not only did UCA rank among the top 25 in the country in rushing offense that fall, but the team earned the fourth seed in the NCAA FCS playoffs while ending the year 10-2 overall and Southland champions after going 9-0 in the conference.  The Bears also ended the 2016 season 10-2 after a 31-24 win over Illinois State to begin the playoffs that fall.Warner twice worked on the staff at Carbondale (Ill.) High as an assistant, first in 2009 and then from 2012-13.  In between, he was a graduate assistant for two seasons at Southern Illinois — where he helped Jewel Hampton surpass 1,000 yards rushing on the way to being named the Missouri Valley Football Conference Newcomer of the Year — before returning to the program as a full-time assistant from 2014-15.Warner played for Campbell at Mississippi Gulf Coast CC during the 2005 and ’06 seasons, earning All-America honors as a sophomore after ranking fourth in the country in rushing as he gained 1,244 yards and scored 10 touchdowns on 169 attempts.  Upon receiving his associate degree from the school, he transferred to Southern Illinois where in two years he was part of a program that went 21-5 overall and 12-2 in league play, making the NCAA FCS playoff field on both occasions including winning a pair of games in 2007.  In two seasons at the school, Warner rushed for 1,790 yards and 15 touchdowns — averaging more than six yards per carry — and he also returned 28 kickoffs, including three for scores, still ranking among the top 20 on the Salukis’ career rushing record list.  After running for 1,265 yards and 10 touchdowns while standing second nationally with an average of 31.2 yards per kickoff return he was named first-team All-America by the Associated Press and finished 10th in the voting for the Walter Payton Award.A 2009 graduate of Southern Illinois with a degree in recreation, Warner and his wife Dominique have two daughters, Penny and Alivia.