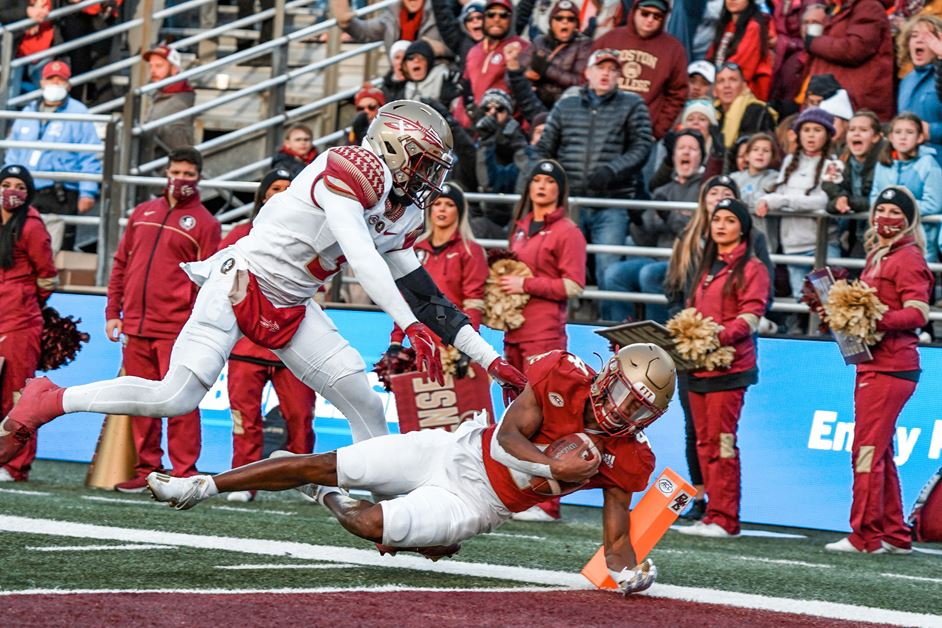 CHESTNUT HILL, Mass. — The Boston College football team trailed by 23 early in the third quarter and scored 20-unanswered points against Florida State, but its final drive came up short in a 26-23 loss at Alumni Stadium on Saturday. The Eagles dropped to 6-5 overall and 2-5 in the ACC, while the Seminoles avoided elimination from bowl contention as they moved to 5-6 and 4-4.

BC quarterback Phil Jurkovec connected with Zay Flowers on a 36-yard touchdown with 10:21 to play to make it a one-score game. The Eagle defense forced a stopped at midfield on the ensuing possession and began its drive at its own 11-yard line with eight minutes on the clock. BC converted four fourth downs, including a fourth-down keeper by Jurkovec, but were forced to attempt a second fourth-down conversion at the FSU 37; outside of field goal range. In a collapsing pocket, Jurkovec heaved a prayer into the middle of the field on fourth-and-10 that was intercepted by Akeem Dent.

Jurkovec finished the game just 10-for-24 for 148 yards. He rushed for 59 yards on n16 carries. Flowers ended the day with three receptions for 92 yards.

Boston College wraps up the regular season next Saturday against Wake Forest at home. Game time will be announced on Sunday.