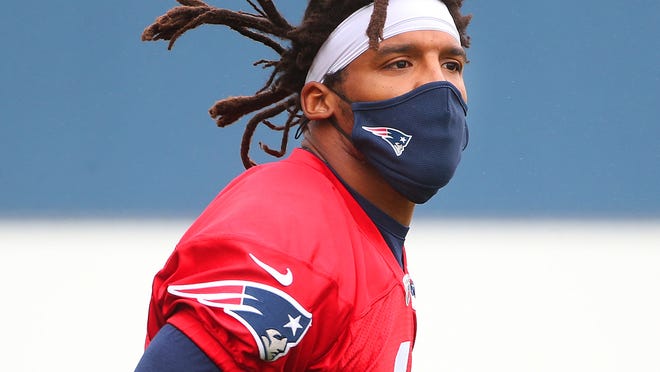 Those dudes will never get along. We all said this to ourselves when Cam signed last year with the Patriots.

Turns out, we were all right.

Cam got sent to the streets today. By Belichick. Unceremoniously, of course. Hardly a word was spoken other than “get out now.” Probably not even that much. Security guards just pointed Cam towards the door. He probably got a text: “You’re cut. Leave now.”

You can be sure Cam was hardly given more than two minutes to unload all the pictures of himself pasted on his locker walls. He got told he was no longer on the Patriots roster, his services were no longer needed or wanted. He was designated for assignment, cut, fired, 86ed, kicked out.

All that, none of it pleasant. Today. In one man’s life. Ordinarily, this would be sad.

But with a guy like Cam, none of us really feel bad for him. He doesn’t engender those feelings in anyone.

The fascinating thing about this is that one day not too long ago, yesterday to be exact, he was the starter. Belichick was talking about how he had some key quarterback decisions to make but conventional wisdom held that Cam would start Game 1.

But Cam violated Belichick’s inner sense of values. He apparently told Belichick he hasn’t been vaccinated for Covid-19 and therefore had to take some test out of town or something and, anyway, would have to miss five days of practice.

At that moment you can imagine Belichick muttering to himself: You mean to tell me you’re going to miss five days of practice because you didn’t get vaccinated before our training camp started?

How do you think Belichick feels about guys missing practice for reasons like this? He hates it when guys miss practice for any reason. He hates them when they show up, too, but that’s another story.

Cam could have avoided all this and been at those practices. But instead, Cam had to be Cam and played poker with his fate as the quarterback of the Patriots, his last real chance to be an NFL starting quarterback.

He didn’t internalize rule number one with the Patriots: Never play poker with Belichick. Never cross him. Never tick him off. Never tell him anything that in any way makes him wonder if you’re committed to winning his 7th Super Bowl title, which he wants to desperately to tie another guy he hates, Tom Brady.

Could all this have been an even more selfish and sinister plan by Belichick?  Hear me out. Last season he knew his team would blow because Brady bolted mid-way through the offseason. So he purposely chose Cam to be his quarterback to ensure the Patriots would blow and they’d miss the playoffs.

He knew the following season he would get a shot at a high draft as his next star quarterback, which he did by bringing on Mac Jones.

So now he can blame Cam for his team not winning the Super Bowl last season. It was Cam’s fault, not Belichick’s.

A business relationship between Cam and Belichick was never going to end well. More than anything else, Belichick hates flamboyant guys. Cam is nothing if not flamboyant.

Cam is all those things. He never had a chance.

In Belichick’s world, all the players exist to serve his wishes and to fulfill his ambitions.

Cam was never going to fulfill Belichick in any way.

He detests Cam. Today he demonstrated that.

It was business. And it was personal.

And we all knew it was coming sooner rather than later.