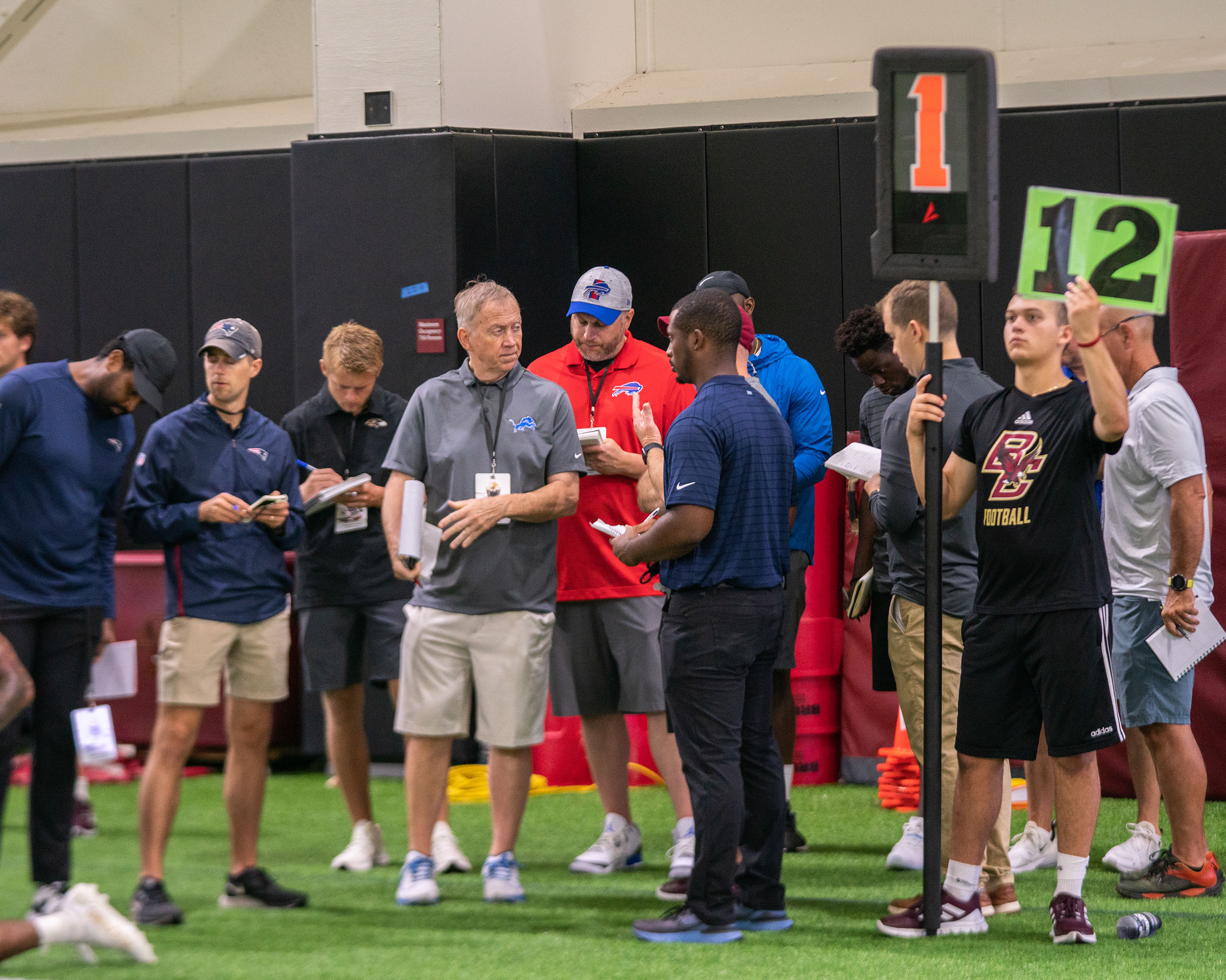 CHESTNUT HILL, Mass. – The Boston College football team completed one of its most productive days of training camp inside Fish Field House on Thursday. The Eagles covered a multitude of different situations over the two-plus hour practice, including extensive work on third downs.

With an extended practice in full pads on Thursday, the Boston College Eagles will lighten the practice load in uppers on Friday before putting full pads back on Saturday. The second scrimmage of preseason camp is scheduled for Sunday morning.

Head coach Jeff Hafley discussed the format of the Eagles next scrimmage on Sunday.

“We’re going to just play,” said Hafley. “Offense on one sideline, defense on the other sideline, play clock running, put the ball down, first down and let’s see what happens. Continue to build … sub in and out. Get the coaches off the field, let the players play. Just let them play. Don’t tell them where to line up. Don’t tell them what to do. Don’t give them any alerts. Let them go play football. Then watch it and grade it and really see where we’re at.”

After limiting the first and second-team units to approximately 35 reps in the first scrimmage of preseason camp Monday, Hafley hopes to double that workload for the players on Sunday as Boston College continues to ramp production up to prepare for the Sept. 4 opener vs. Colgate at Alumni Stadium.

“I’m going to try to ramp that up to maybe take up to three quarters (on Sunday) and then a final scrimmage trying to go four quarters just to build them up so they’re also physically ready to play the whole game since we don’t get a preseason game.”

News and Notes: Thursday’s practice was attended by 10 NFL scouts and the East-West Shrine Game … the Titans, Ravens, Lions, Giants, Bills and Patriots were in attendance on Thursday, including multiple members from the Patriots, Lions and Ravens … freshman WR Jaden Williams had two 40+ yard touchdown receptions on Wednesday and during the first play of 7-on-7 Thursday, he scored on a 40-yard deep shot from QB Phil Jurkovec … Jurkovec looked sharp throughout the day, spreading the ball around to five different receivers during 7-on-7 work … freshman LB Bryce Steele and junior SS Jaiden Woodbey combined for a tackle behind the line of scrimmage to start 11-on-11 … with a rash of injuries at defensive tackle, the coaching staff has moved redshirt freshman Dwayne Allick to defensive tackle … the Maryland native played both ways in high school and got some immediate work in the rotation during team periods this week … defensive line coach Vince Oghobaase is preparing to get a multitude of players ready to being able to substitute rotations of defensive linemen in and out this season … at one point Thursday, the entire defensive line was all New Jersey natives with junior Shitta Sillah and freshman Donovan Ezeiruaku at end and junior Khris Banks and sophomore Cam Horsley at tackle … graduate safety Deon Jones is working his way back from a knee injury suffered at the end of the 2021 season and wore a yellow non-contact jersey in team work for the first time … the running back quartet of Xavier Coleman, Travis Levy, Pat Garwo and Alec Sinkfield all continue to show their versatility, especially in the passing game … Coleman caught a 55-yard touchdown pass while Garwo also caught a touchdown pass Thursday … senior DE Marcus Valdez continued to be a nuisance in the backfield during team period, including a fumble recovery … Sillah had a sack if quarterbacks were live, along with freshman DL Ty Clemons … freshman WR Lewis Bond has been another impact newcomer on offense, finding a nice rhythm with QB Dennis Grosel on Thursday with several receptions during team and 7-on-7 periods.