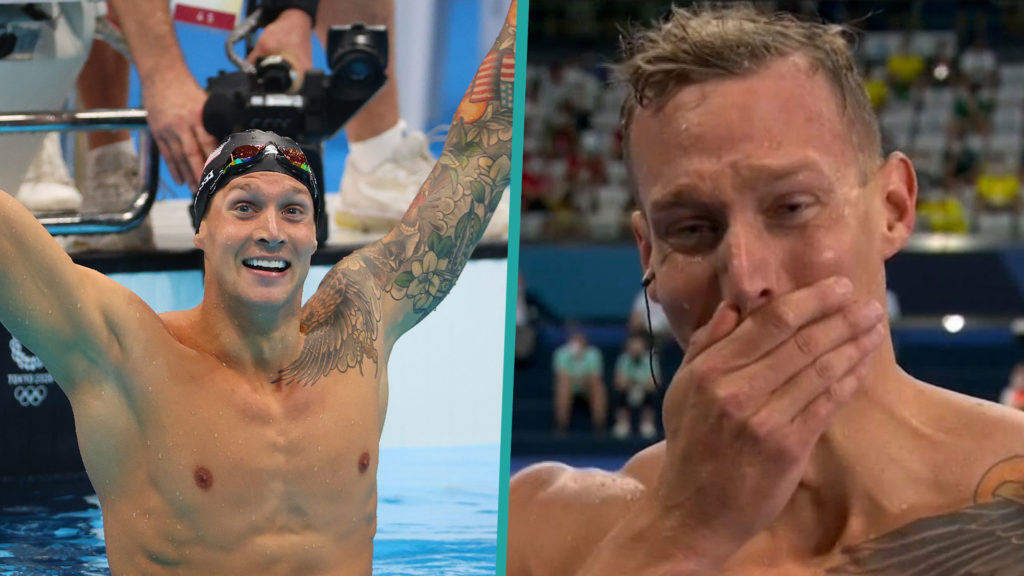 After all that has happened — the pandemic, the delay of the Olympics by one year, the expectations put on his shoulders to be the next great American male swimmer — Caeleb Dressel’s emotions came pouring out on national TV during his interview with NBC Sports.

Fresh out of the water after capturing the Gold Medal in the 100-meter freestyle Wednesday, tears filled his eyes. His family on TV cried with him. It wasn’t something he could control. That’s how emotional a scene it was.

“This past year has been very hard,” he said.

Very hard for him, not knowing if there would even be a 2021 Olympics. Yet still having to continue swimming over and over, day after day. And if the Games didn’t happen, maybe his window to be an Olympic champion would pass because he wouldn’t be as fast in 2024.

Very hard for all the other swimmers and Olympic athletes going through the same emotional uncertainties, wondering if their dedication to practice swimming in backyard pools and other makeshift workout situations would ever end up with actual competition in Tokyo.

Very hard for everyone else who organized the Olympics and coached the athletes and built the stadiums that few people are even allowed to enjoy.

Very hard on the world’s population as a whole, which had to mask up and stay away from each other and worry about catching Covid-19, a deadly virus, for what seemed like 20 years.

Oh yes, the past year has been very hard on so many levels for so many of us.

But Dressel and so many athletes at the Olympics persevered through all of it and are now bringing us entertainment and excitement and stirring our hopes about what can be accomplished if you just keep practicing amid the chaos.

The tears Dressel shed were the tears of one man, but really he was crying with all of us, as many of us have during the incredibly difficult last year.

They were tears of relief, tears of triumph, tears that seemed to say: “I’ve been through a lot and so have all of you and I’m so glad that it’s turned out OK in the end, that I won this Gold Medal I’ve been thinking about for years.”

The 100-meter freestyle in the Olympics is a pressure-packed situation. Eight incredibly fit athletes stand on the blocks knowing that in under 25 seconds one of them will win. One slow start, one slight twitch on the flip turn, one-half second too slow touching the wall and you’re not the Gold Medal winner.

All of that. And then it’s done. You win. You lose. Probably a thousand times Dressel has swum this same race in practice and other meets. But the Olympics is the one that everyone will remember.

And we remember now what Caeleb Dressel did last night, and we won’t forget. With the lights shining the brightest, with the most people watching, with his reputation as a great swimmer never more under the microscope, he finished first.

His tears made us remember what we’ve all been through, what he’s been through, and that it’s all in the past and we’re moving ahead. There’s reason to be hopeful. Fun is now and in front of us. Champions are still among us and races are being won.

Life is getting better for all of us.

Those are winning ideas worth crying about.