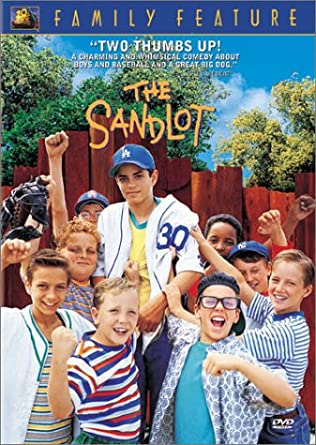 In the past, I have written an article about my favorite sports movies. Today I am going to dig deeper into that by telling you my five favorite baseball movies. At one point in my life, baseball was my second favorite sport to watch on television. It is now my third favorite behind football and hockey. I have very few sports movies that I do not like. I picked five and what I will do is tell you what the movie is about and why it made my list. Here are my five favorites: The Sandlot, For the Love of the Game, Field of Dreams, Little Big League, and Rookie of the Year.

This is my favorite sports movie. What I love about it is that they give a chance to a kid who in the beginning they thought was no good. It is cool how they played all summer long. The team plays a team that looks like a typical little league team. When they beat them, they go to the carnival and chew chewing tobacco, and throw up. In the end, they steal Smalls’ father signed Babe Ruth ball to play with. They try everything thinkable to get the ball back. When they get the ball back it is all chewed up, but the dog owner gives them a baseball signed by all the New York Yankees. All the kids grow up and do their thing and one of the best kids on the team plays for the Los Angeles Dodgers. Smalls ends up being the announcer for the Dodgers.

For the Love of the Game

This movie is about Kevin Costner, who pitches for the Detroit Tigers. While in New York playing the Yankees, he runs into Kelly Preston. He helps her get her car started and they begin to start dating even having a long-distance relationship. Costner goes through a lot and at one point, he cuts his pitching hand and may have to give up his pitching career. He heads back to pitch against the Yankees and does something that is rarely done. Costner throws a perfect game against the Yankees with the legendary broadcaster Vin Scully calling the game. In the end, he heads and meets Preston at the airport and moves in with her to London after retiring for baseball. I like the whole story of how he pitches a perfect game despite everything going on.

Kevin Costner is back in this one as well. This time he is a farmer, and he is out in his fields one day and hears a voice. The voice says, “If you build it they will come”. After hearing the voice a few more times he builds a baseball field. The baseball field in the movie still stands today in Iowa. When the field is complete Shoeless Joe Jackson appears. When he disappears into the corn many believe that it is heaven. After a while, he goes to Boston to meet with James Earl Jones who is a famous author. Costner gets Jones to return to Iowa to see the field and at that time many famous players are now playing. In the end, Costner is on the verge of losing his farm and his father shows up as a player. People start showing up as the movie ends.

This movie is about a young kid who loves the game of baseball and whose grandfather owns the Minnesota Twins. His grandfather passes away and, in his will, he gives the team to this young man. From that point, he and the manager of the team have disagreements. The young man fires him and makes himself the manager of the Twins. He goes through a lot during the season including exiling his friends. In the end, he gets his friends back and can lead the Twins to almost getting to the playoffs. The young man learns that to just be a kid and gives up his manager position but remains the owner of the Twins.

Rookie of the Year

In this movie, a kid breaks his arm trying to impress a girl that he likes in school. After his arm heals, he finds out that he can throw a baseball extremely fast. After that, his mom’s boyfriend gets him a tryout with the Chicago Cubs. He makes the team as a closing pitcher. In his start, he struggles but after getting a prep talk from one of the Cubs pitchers, he finds a way to start pitching well. The young man, like in Little Big League, exiles his friends but gets them back. In the end, he leads the Cubs to a World Series title.

I love all five of these baseball movies and will always watch them when they come on. The Sandlot is probably in my top 20 favorite movies of all time. The other four are great as well for the stories that they develop. I have some honorable mentions and they would be Major League, 42, Moneyball, and Trouble with a Curve. All of these, like the ones that I listed above, are great in their way. What are your favorite baseball movies and why?