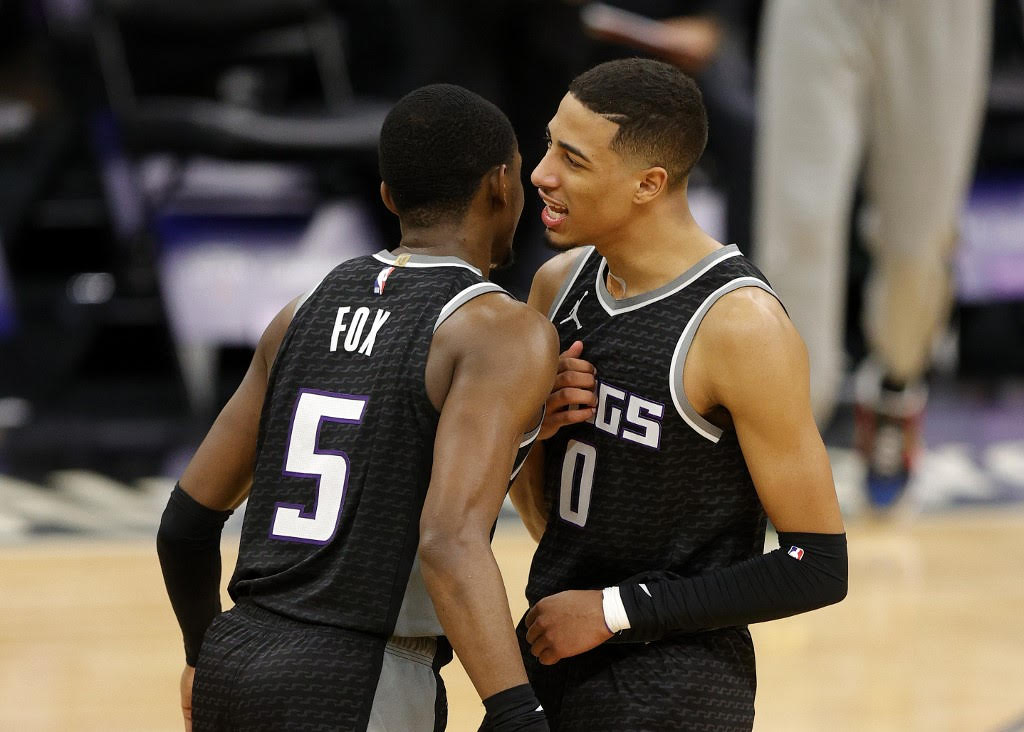 SACRAMENTO, CALIFORNIA - FEBRUARY 03: Tyrese Haliburton #0 congratulates De'Aaron Fox #5 of the Sacramento Kings after Fox made a basket against the Boston Celtics at Golden 1 Center on February 03, 2021 in Sacramento, California. NOTE TO USER: User expressly acknowledges and agrees that, by downloading and or using this photograph, User is consenting to the terms and conditions of the Getty Images License Agreement. Ezra Shaw/Getty Images/AFP

The 2021 NBA All-Star Weekend has come to a close as the regular season just resumed a couple of days ago on March 10th. This next stretch will be critical to how the playoffs will shape up. With the always gripping trade deadline looming, teams will seek to strengthen their weaknesses in time for April. Some teams will either go on hot streaks, ultimately looking to play the spoiler card in the postseason, or fall back in the bubble mix of the conference. The Eastern Conference Seeds 4 through 11 are separated by a mere four games. The Western Conference Seeds 5 through 10 have only three and a half games between them. It’s a long season but with the ongoing pandemic and the COVID-19 virus still stirring the team’s rotations and schedules up, who knows how the standings will look come postseason time.

How close are the Scores?

The Sacramento Kings are currently 15-22 sitting in the 12th spot in the thrilling Western Conference on the outside looking in. Among the top 13 NBA teams in the West, the Kings are one of two teams that have a losing record at home and on the road, the other being the Oklahoma City Thunder. The Kings have absolutely no problem scoring the basketball. The young and high-energy Kings average 114.7 points per game which is good for an impressive ninth-best in the association. They also shoot a respectable 37% from the three-point line and possess the ninth-best offensive rating in the league. These are all promising stats, especially for a squad that doesn’t entirely rely on the long ball to score the majority of their points. These statistics would lead you to believe this is a formidable young team with bright playoff aspirations.

Even with all the spacing, shooting, and pathways for players to thrive on offense more so than ever before, the NBA is still a two-way league. As great as the Kings are on the offensive end, they don’t shut down their opponents enough on defense. The Kings are dead last in the NBA in scoring defense and opponent field goal %, allowing a whopping 120 points per contest on 52% shooting from the floor. Nothing will spell out their weaknesses on the defensive side more than those two disastrous statistics.

Some of this may be on the philosophies of head coach Luke Walton who has had a subpar tenure thus far in Sac-Town. Some of it is also on the front office for not surrounding its’ core pieces with more reliable and valid defenders. The Kings will definitely look to make some moves at the deadline on the 25th as they look to make a playoff push with plenty of time left in the regular season. Despite their high and low-filled start to the regular season, the Kings have one of the best young talented cores and might just be a couple of complementary pieces away from taking that next step.

Last year on November 25th, Kings star point guard De’Aaron Fox signed a five-year/$163 million maximum extension to stay in Sacramento. Fox was fresh off a career year and Sacramento was impressed enough to offer him a max deal, making him the cornerstone of the franchise going forward. On draft night, the Kings used their 12th overall pick on Iowa State Cyclone guard Tyrese Haliburton and they haven’t looked back since. The 6’5 swiss army knife swing guard has been nothing short of outstanding in his rookie year so far. Haliburton is averaging 13.2 points, 3.6 rebounds, and 5.4 assists in 30.1 minutes played per game. Haliburton is also fresh off back-to-back Western Conference Rookie of the Month nods for January and February. He recently became the second rookie in NBA history to post at least 15 points and five assists on 50% FG/40% 3P FG splits for a month. Haliburton being able to thrive as both a ball-handler and off guard has brought the Kings offense and lineup versatility to new heights.

The past couple of years, De’Aaron Fox has had to deal with the burden of having to generate most of the offense in Sacramento. With Haliburton, it doesn’t just give Fox the ability to rest and but also allows him to focus on being aggressive scoring the basketball. Haliburton might not be as elusive as Fox off the dribble or possess the athletic gifts Fox does, but he is excellent in the pick and roll and has provided plenty of scoring opportunities for bruisers like Rishaun Holmes and Marvin Bagley in the paint on alley-oops and dump-offs. His solid height and wingspan have allowed him to utilize his size to rise for floaters in the paint and as well as darting passes to perimeter/slasher scorers in Harrison Barnes and Buddy Hield. Haliburton, who has proven that his unorthodox perimeter shot won’t need a tweak in mechanics as experts initially thought, can stretch the floor as well.

He’s shooting 43% from deep on 5.5 attempts a night. He’s currently shooting the seventh-best 3P FG% by a rookie in NBA history. Haliburton, being a threat from the perimeter, already boasts a solid three-point shooting team and it stretches the floor for a guy like Fox that can get to the cup at any given moment creating plays for himself and others.

Long-time NBA historian Bill Simmons has been high on Haliburton since prior to the draft even stating “Haliburton can be one of the best three guys on a championship team”. Simmons also alluded to the fact that had Phoenix spent their lottery pick on Haliburton instead of forward Jalen Smith out of Maryland, Phoenix would more likely reach championship potential sooner rather than later. Haliburton studying in Paul’s shadow would have done measures for his already high ceiling. As seen with Shai Gilgeous – Alexander has climbed a level and is having a career year with the Oklahoma City Thunder after playing with Paul last year. Haliburton would have ultimately benefited learning from arguably the best pure point guard to ever play. No matter where Haliburton is plugged in whether it’s with the starters, second unit, crunch time lineup at either of the guard positions, he’s going to make an instant impact on the floor and is capable of doing whatever is asked of him.

Haliburton’s rise in Sacramento has taken vast pressure off of De’Aaron Fox. His offensive versatility allows both him and Fox to interchangeably play both backcourt positions and rely on someone else trustworthy to run the offense proficiently. Let’s simply start off by stating that De’Aaron Fox was snubbed of an All-Star selection. “He’s [Ja Morant] who De’Aaron Fox thinks he is”. Those were comments made by ESPN The Jump analyst Amin Elhassan back in December when they touched upon the potential of Memphis Grizzlies point guard Ja Morant.

Since the beginning of February, Fox is averaging 26 points, three rebounds, and nine assists a night on 47% shooting from the floor. Fox is one of five players this year to average at least 23 points, three rebounds, and seven assists on at least 45% shooting from the floor. (LeBron James, Luka Doncic, James Harden, & Nikola Jokic). The Kentucky standout has been insane in clutch time (last five minutes of a game in which the point differential is five or less) this season as well. Among those who have played at least 60 minutes of clutch time, Fox is fourth in points scored. Fox is the only name amongst the top 10 total clutch points scored that was not named an All-Star. (Zach Lavine, Dame Lillard, Joel Embiid, LeBron James, Nikola Jokic, James Harden, CP3, Jayson Tatum, & Bradley Beal). Amongst those in clutch time that have attempted at least 40 shots from the field, Fox is shooting 47.5% which is a higher percentage than other guard counterparts like Trae Young, Devin Booker, and Zach Lavine. Fox has also only committed three turnovers in clutch time this season.

Fox has matured immensely on offense showing us various glimpses of a complete balance of a polished offensive game and freak athleticism. Clutch time can at times be misleading considering the number of games played within five points varies from team to team. The Los Angeles Clippers, for example, through March 2nd were 30th in defensive rating, 29th in FG%, and 20th in win percentage. The Clippers are currently second in the Western Conference. So you may ask how they have that solid of a winning record with such poor clutch stats. The reason is that they’ve only participated in 38 minutes of clutch time this year. That’s not a convincing enough volume of clutch time minutes to make claims about how teams handle crunch time. In this instance, though, regardless of win or loss, De’Aaron Fox has proved that he himself is someone you want with the ball in his hands when the game is up in the air at crunch time and he’s been worth every penny of that maximum extension he inked prior to the season.

The biggest question for the Kings going forward is deciding whether Luke Walton is the head coach for their long-term future. Walton has an NBA career W-L record of 45-63 over the past two seasons as Kings head coach. Many speculated the only reason Walton still has an NBA job was because of his over-exaggerated 39-4 stint with the Golden State Warriors back in 2016 when he filled in for Steve Kerr who was undergoing health issues of his own. Walton then followed that up by three underwhelming seasons coaching the Lakers.

Buddy Hield, who is fresh off of back-to-back seasons averaging at least 19 points per game and 39% shooting from the three-point arc, has descended into a strict sharpshooter role for the Kings rather than providing that secondary on ball scoring presence as he has in the past. Of his 14.1 FG attempts per game, 10.3 of them are from beyond the arc. Hield, who just like other shoot first guards, has benefited from the evolving of the three-point shot in today’s age. Stepping into this particular role may be so more so that Haliburton could fit in more smoothly in the offense especially with Hield being the best volume perimeter shooter on the team. It was inevitable he’ll get plenty of opportunities to let it fly with Fox and Haliburton running the offense.

Now, with the trade deadline approaching, do the Kings feel like they can get something that’ll help take them to the next level especially with Haliburton emerging into the Kings foundation for the future? Someone that possesses the services Buddy Hield possesses and his ability to score the ball will always appeal to other teams. Or do the Kings believe that Buddy gives them a different yet versatile wrinkle in the backcourt especially with small-ball lineups now being a staple in stirring up oppositions?

The Kings may choose to move other appealing pieces such as Harrison Barnes. The Kings have displayed flashes of being a prominent team in the near future but their defensive numbers are too disastrous to use “they’re young” as an excuse for their struggles on that side of the court. If the Kings want to make the necessary playoff push they’re capable of something must give and something has to change whether its schemes, personnel, etc. 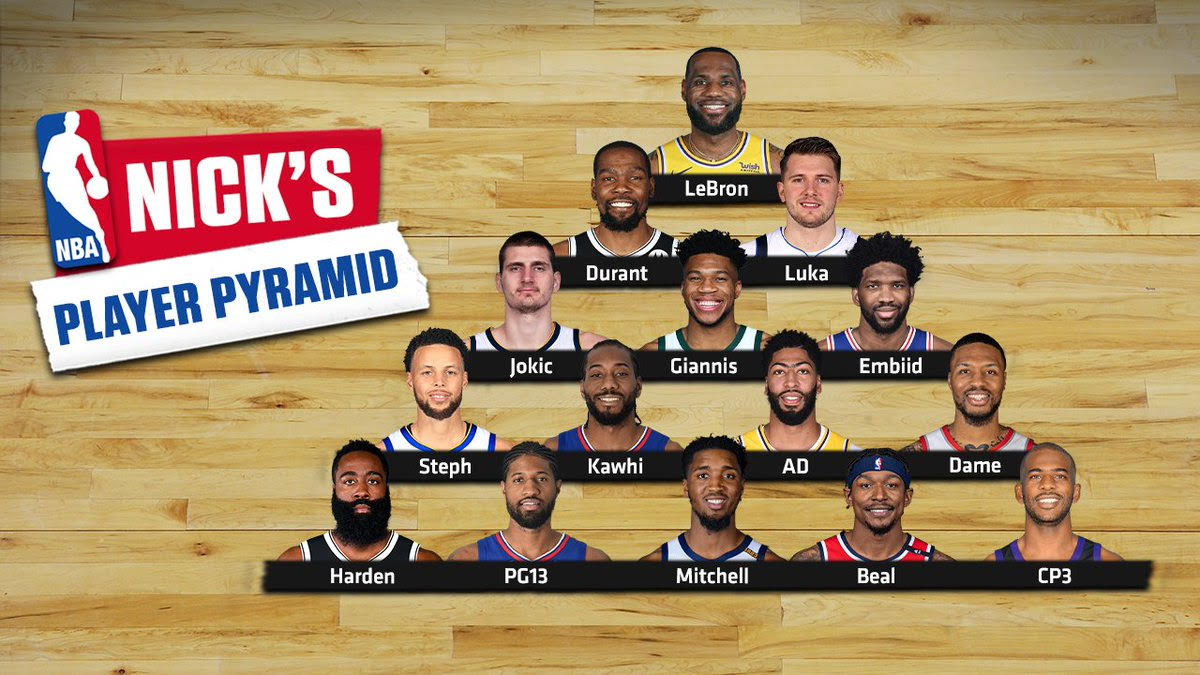