Tennessee Titans: Derrick “King Henry” Is in a Class by Himself 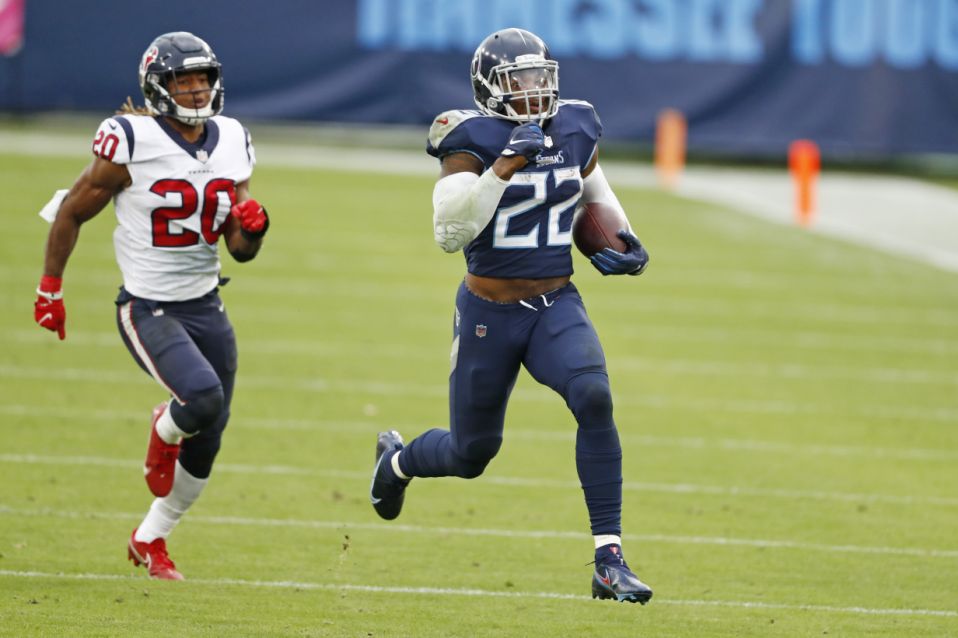 Derrick Lamar “King Henry” Jr. is rolling down the railroad tracks towards a 2,000-yard 2020-21 NFL season. Already an MVP candidate leading the league with 1,257 rushing yards, the runaway locomotive of a running back for the Tennessee Titans (8-3) looks like an unstoppable force.

Consistently churning the butter week after week, Henry has accumulated 100-plus yards on the ground in eight-straight games. Bananas.

In a class by himself ahead of Minnesota Vikings’ RB Dalvin Cook with 1,130 total toting yards, Derrick Henry seems to be getting stronger as always with this ‘Doctor Strange’ version of the NFL regular-season nearing its final chapter.

Fresh off a 45-26 shellacking of their AFC South rival Indianapolis Colts (7-4) in Indy, the Titans take a one-game lead atop the division into their matchup versus the surprisingly good Cleveland Browns (8-3) on Sunday.

The COVID-19 pandemic has left many stadiums around the league with just a few thousand fans in attendance, and others have been empty altogether. Mr. Henry hasn’t noticed as he’s stiff-armed his way through NFL defenses with powers comparable to “Wonder Boy.”

Standing 6-foot-3 and weighing in at 247 pounds from Yulee, FL, Derrick Henry is simply a freak of nature. An Alabama Crimson Tide product with a college career coated in gold, “King Henry” capped it off with style, taking home the 2015 Heisman Trophy as a junior. In doing so, Henry broke Herschel Walker’s single-season SEC rushing record. Goodness gracious, my friends.

Derrick Henry is 26 going on 27-years-old and shows no sign of slowing down due to your typical NFL RB wear and tear. Last season (2019-20), Derrick led the league with 1,540 yards on the ground and tied Green Bay Packers’ RB Aaron Jones with 16 trips to the heezy (touchdowns).

No. 22 has compiled a grand total of 5,090 yards (almost three miles) since being drafted No. 45-overall in the second round of the 2016 NFL Draft by the Titans (formerly the Houston Oilers). Add 50 pigskin toting TDs, 71 catches, 671 receiving yards, and three more house trips via the air thus far in his professional career, and you get the picture that “King Henry” is worthy.

Along with Derrick Henry’s aforementioned 1,257 rushing yards on the season, he leads the league with 256 rock touches. Mr. Henry is also second in the NFL on the ground with 12 TDs.

“King Henry” is helping propel the Tennessee Titans towards another AFC playoff run. Coming off last season’s trip to the AFC championship game, the AFC South leading Titans are starting to look poised enough to repeat the feat this season. In fact, better defense with continued phenomenal play that equals the quarterback Ryan Tannehill to wide receiver A.J. Brown connection, and Tennessee’s in the proverbial driver’s seat for an AFC South crown.

By the way, NFL Network’s Nate Burleson pegs Derrick Henry and A.J. Brown as the best duo in the NFL. I can’t say I argue with that.

Best duo in the NFL 😎 @nateburleson

If he reaches the 2,000-yard plateau, don’t forget to crown Derrick Henry with NFL MVP honors along the way. It’s definitely doable with five games remaining, folks. In the month of December in recent years, Mr. Henry has been historically supreme. Welcome to ‘DHenber.’

Don’t try to tackle stud-muffin Derrick Henry near his chest area or above. As an NFL defender, you’ll take the nastiest stiff-arm I’ve ever seen with your tochus hammering the turf. Try tackling him low and you might lose your helmet when his cleats graze your face mask. Yikes.

With absolutely incredible speed for his size, Mr. Henry was clocked at 21.62 miles per hour according to NFL Next Gen Stats during his 94-yard TD dash against the Houston Texans earlier in the season. Wow.

At 247 pounds, if Derrick Henry’s size, speed, strength, power, toughness, and effort don’t do anything for you, nothing will. This man’s an absolute beast.

3 thoughts on “Tennessee Titans: Derrick “King Henry” Is in a Class by Himself”