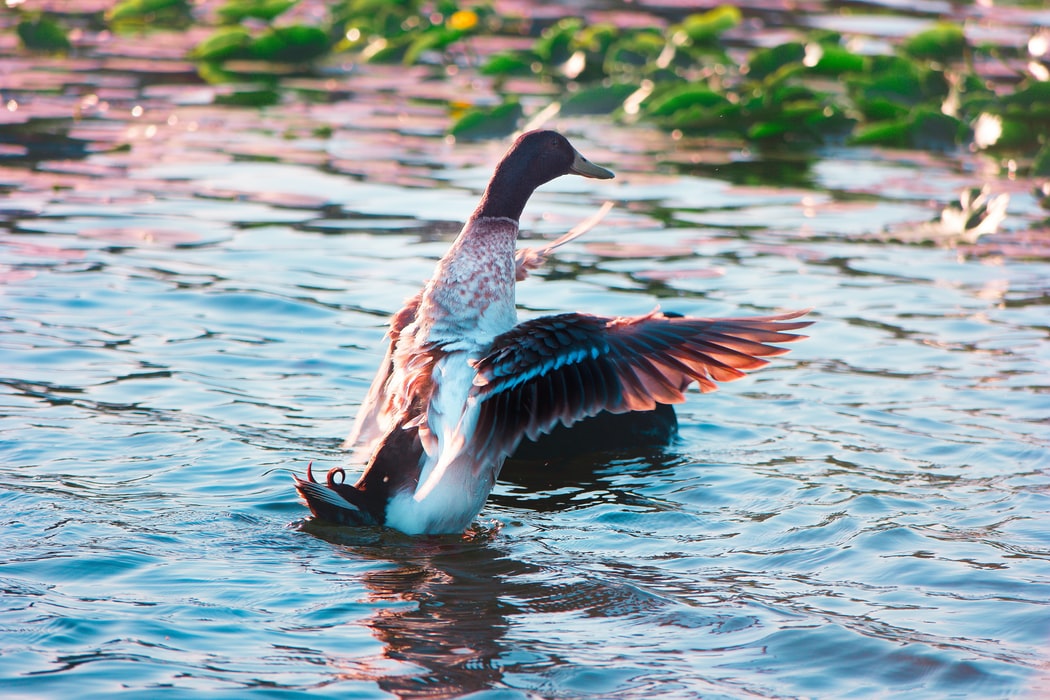 When we last left off, Michael Phelps, Sammy Sportface, and Brett Favre were wearing turduckens on their heads like football helmets and were on the verge of having a swimming race across Turducken Pond, also known as Turducken Soup. Suddenly, from the 17th fairway, Katie Ledecky shows up.

“Where’s Sportface?” she asks. “He’s the loser who wrote on Swimswam.com four years ago that I was the second-best athlete in Little Flower Grade School history and that he, Sportface, was the greatest. I’m here to prove Sportface wrong. I’ll race him through the Turducken Soup and show everybody that I was Little Flower’s greatest athlete – not Sportface.”

“I didn’t write that, Ralph Garcia did. He’s Sammy Sportface.”

“Garcia didn’t go to Little Flower School, you did, Sportface,” says Ledecky, the greatest female swimmer of all time. “For four years I’ve been chasing you down ever since that article got published. Let’s race right now.”

Sportface doesn’t want to. He thinks it’s a gross idea to swim through Turducken Soup with all the rotted and moistened turducken meat floating around and the soggy sausage bits. Might catch lice or something.

Besides, he doesn’t see any upside. If he loses to Ledecky, it will destroy his credibility as Little Flower’s greatest all-time athlete and that will mean he published an inaccurate article on Swimswam.com. Lord knows he can’t afford another hit to his reputation as an upstanding sports blogger.

If he beats Katie, everybody will dismiss it as just a cheap publicity stunt racing Ledecky in Turducken Soup instead of a real Olympic-size pool with electronic timing systems and flags to help swimmers see when they’re approaching the walls.

“I’m out,” said Sportface “There’s nothing for me to gain by racing you, Katie. It’s better for people to continue to believe I’m the greatest Little Flower athlete ever than race you and lose swimming among a bunch of soggy meats.”

“I’ll race her,” he said. “I’m Brett Favre and then, boom, I became John Madden’s hero, and then boom, I showed up at this lame turducken golf tournament and rescued Barkley’s ball from the Turducken Soup.”

Madden can’t control himself: “I mean, you have to give it to this guy Brett Favre. I mean, Katie Ledecky shows up and wants to race Sporface but Sportface is too afraid to, but Brett Favre doesn’t even know what fear is. Here he is again, boom, being only who Brett Favre could be. I think he could beat Ledecky in a race with 10 turduckens on his head while carrying 20 turduckens on his back.”

“I came here to race Sportface,” said Ledecky. “Brett Favre didn’t go to Little Flower and claim to be a better athlete than me.”

“My stomach is feeling turrible,” said Chuck. “All that turducken I ate has me feeling sick.”

He steps to the edge of the pond, leans over, and upchucks countless chunks of turducken into Turducken Pond.

Everybody watches. It’s a difficult sight. On and on Chuck heaves. The turduckens in Turducken Pond start to nibble on Chuck’s chunks. Seagulls fly down and compete for nibbling time. Minnows try to find their way to the surface to get some of Chuck’s chunks.

What started as a celebrity golf tournament has turned into something else, a day of disgust. How could something so innocent and genuine become this ugly?

Everybody there ponders this in unison in 15 minutes of dead silence. Even Madden stops talking and thinking about his love for Brett Favre. Mickelson contemplates floating a bet to the group about how many more chunks Chuck will hurl into Turducken Pond, but he decides that might not be in good taste.

A day that started with such promise had turned into rank odor and soggy dead meat floating everywhere their eyes could see.

“How did my golf event turn so sour so fast?” asked Mickelson. “I’m blaming this on Sammy Sportface. He convinced the ESPN cameraman not to cover the golf and instead show Brett Favre putting a turducken on his head like a football helmet. That was one big distraction that led to Ledecky and Phelps showing up, swimming races getting discussed, and Chuck hurling in Turducken Pond. This whole day makes me wanna puke.”

He goes over to the Pond next to Chuck, who is still Ralph Garcia-ing, and upchucks. As he does this, he bets Chuck $500,00 that he’ll hurl more chunks than Chuck.

A trend manifests itself. The turducken eaten at the first tee must have been laced with something. Was it rotten sausage? Turkey that had gotten stale? Who was responsible for this disaster of a day?

“It wasn’t Brett Favre,” said Madden. “Brett Favre didn’t cook the meat. All he did was show up and eat it and then, boom, like only someone like Brett Favre could do, he got in his scuba diving suit and rescued Chuck’s ball from the turduckens. I mean, this guy Favre would never do anything wrong because he’s Brett Favre.”

Was it Sportface’s fault? Did he plot this whole thing so he could write a story about barfing rather than a golf match?