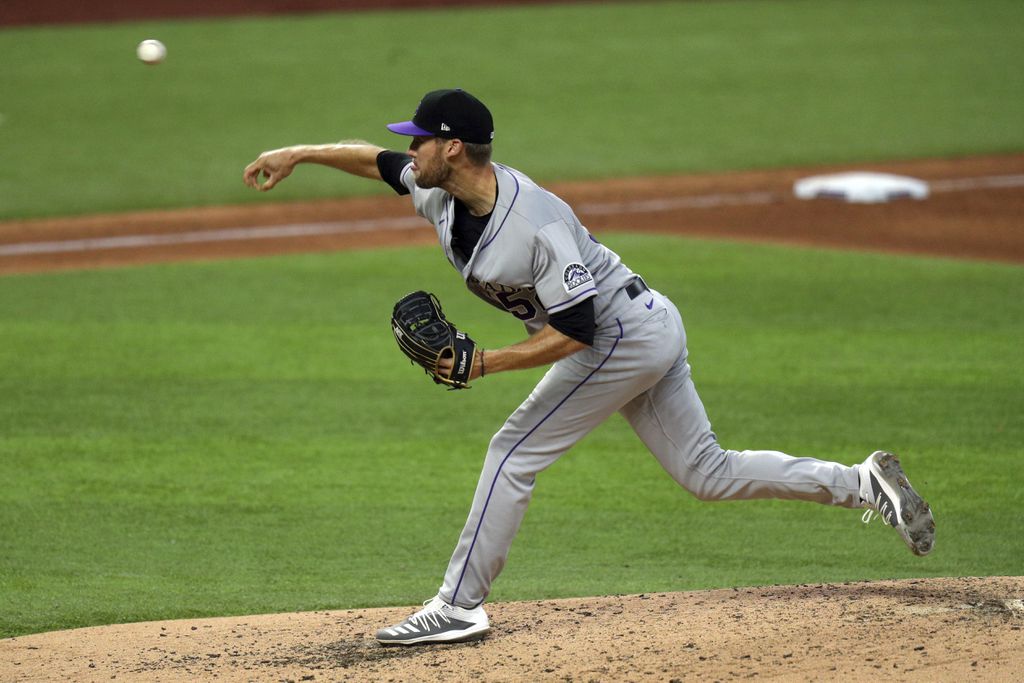 After his departure from the Boston Red Sox and MLB in 2013, Bard’s moment has arrived. Over seven years removed from his last appearance on the mound, Daniel now dons No. 52 in Rockies’ Purple, Black, and Silver.

Mr. Bard’s last MLB game as a member of the Red Sox (2009-13) was April 27, 2013. The very next day on April 28, 2013, otherworldly third baseman Nolan Arenado made his Colorado debut. Now, these gentlemen join forces as teammates in the Mile High City.

Millions upon millions of Americans suffer from anxiety and depression. For Bard, anxiety derailed his professional career. Instead of the adrenaline that relievers feed off of when taking the rubber in the middle of a contest, Daniel would fall apart with a jittery lack of focus.

Dealing 20 of his 25 pitches for strikes in his Rockies’ debut on Saturday, July 25, 2020, the 35-year-old right-hander claimed the victory in a 3-2 affair against the Texas Rangers at the brand spanking new Globe Life Field in Arlington, Texas. Bard relieved starting pitcher Jon Gray in the fifth inning of action.

2,646 days since Daniel Bard pitched in a MLB game.

Today, he picked up his first win since May 29, 2012. pic.twitter.com/nlkM7BoJlE

If you had any questions as to whether his stuff was good or not during his first effort following a seven-year hiatus, here’s your answer. He painted the corners with nasty fastballs topping at 99 miles per hour. That’s electric stuff, my friends. Getting out of a couple of jams, Bard threw 1 1/3 innings of scoreless baseball in relief.

Daniel Bard was responsible for 11 of the 12 fastest pitches thrown in the Rockies/Rangers game, peaking at 99 mph pic.twitter.com/N0tpdh09qO

Bard told reporters postgame, “Going back to when I was struggling, you get that feeling, that butterflies, heart racing, adrenaline going, and it would contribute to all the bad things.”

Hanging the spikes up for good, Bard could’ve easily given in to the monster that represents anxiety. However, quitting didn’t exist in Daniel’s mind, body, or soul. The only thing that did exist was facing his fear.

As I can attest to my own anxiety stemming from Obsessive-Compulsive Disorder (OCD), the practice of facing your fear(s) through any means necessary via intensive therapy is essential. For me personally, writing about sports is one of my greatest tools in my continued fight. My love and passion for writing become my refuge.

For Mr. Bard, his love and passion created his anxiety-ridden nightmare. Punching back, Daniel said, “It wasn’t something I learned overnight, it’s taken practice, it’s taken a lot of intentional work on my part. Hopefully, this proves to anybody out there struggling with anything it can be done and there are avenues to work through those hard things.”

Colorado Rockies’ reliever Daniel Bard has exemplified bravery in his pursuit of returning to MLB. As if the Rockies’ organization needed more motivation in this bizarre 60-game season amidst the COVID-19 pandemic, Bard most certainly provides a little extra. Fans are cardboard cutouts, audio is provided from previous games through each club’s loudspeaker system, and masks are becoming evermore fashionable on the field.

That extra pep that Bard exudes may very well give the Rockies enough juice to make a run at the franchise’s first-ever World Series title. It’s been too long since the Rox won the 2007 NL Pennant. Reaching the Fall Classic that season, the Rox were swept 4-0 by the Red Sox. Colorado, rolling at 4-1 and winners on four-straight road games, open their home slate Friday evening at majestic Coors Field in LoDo, Denver, Colorado, against their NL West rival, San Diego Padres. You never know. This could be the Rox year.