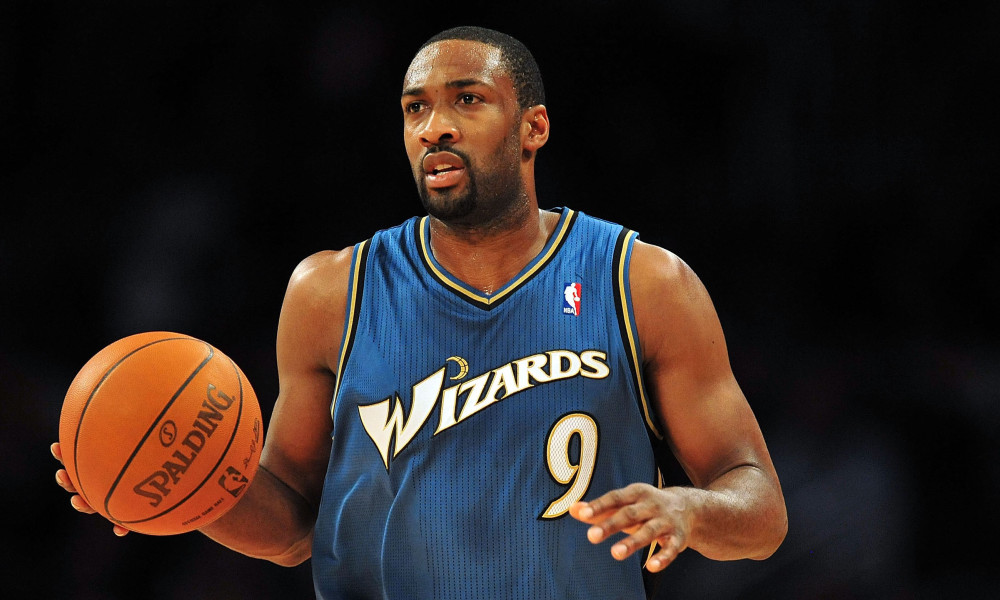 “He’s like, ‘Why aren’t you coaching?’ I was like, ‘I don’t wanna deal with parents.’ He was like, ‘But it’s the future. You know the kids are the future. Take all that knowledge you have, you’ve seen, you’ve studied, prepared, and put it into the future.” This was Gilbert Arenas quoting the late Kobe Bryant attempting to persuade him to take his advanced knowledge of the game and put it into coaching. Many remember Arenas for his braggadocios play and colorful personality on and off the court. His quick exit out of the league due to injuries and infamous locker room gun incident involving fellow teammate Javaris Crittenton overshadowed how talented of a player Arenas was and how he helped evolve the game for the modern-day score-first point guards.

During the early to mid-2000s, most of the score first star point guards featured guys like Allen Iverson, Stephon Marbury, Baron Davis, and Steve Francis. Those guys thrived on their raw athletic ability, handle, and quick step to constantly get to the rim for scoring opportunities or stop on a dime to rise up for perimeter jumpers. The thing with Gilbert Arenas was that he combined his first step, beautiful touch around the rim, and his volume perimeter shooting to always keep the opposition guessing. Arenas was taking five plus three-point attempts as a primary ball-handler in a much slower paced NBA compared to now where traditional big men are stretching the floor like never before. During that period of time, stereotypical point guards were shorter in height, not built like modern-day point guards such as Russell Westbrook, John Wall, and Lonzo Ball. Arenas was too big for point guards listed at 6’3/6’4 with great body control that he could bring smaller guards into the post. But Arenas was also too quick for shooting guards and swingman forwards so he could blow right past them.

ESPN analyst and NBA champion Richard Jefferson stated that Arenas was the best player to come out of Arizona and this is a program that has produced the likes of Mike Bibby, Andre Iguodala, Jason Terry, and Jefferson himself. Gilbert Arenas, from 2004-08, averaged 25.5, 29.3, and 28.4 points a night all before turning 26 years old on his way to making an All-NBA team each of those three seasons. During those three seasons, he averaged at least eight free throw attempts a game. During a Redraftables on Bill Simmons Book of Basketball 2.0 podcast, Simmons stated “There was a probably two-year stretch there where he was on the level of T-Mac [Tracy McGrady] and all those guys. And what’s interesting is, I actually think peak Gilbert [Arenas] was a higher level than any season Vince Carter had except for that one awesome 2001 season. Honestly, if you’re just talking about who did more offensively, you’d probably say Gilbert brought more to the table. Well look at his 2006 season and tell me the two things that jump out. Seven threes a game – seven attempted threes a game, 37%, and ten free throws. Ten free throws a game. So he’s basically James Harden in 2006 but there are no possessions back then.

Those Washington Wizard teams always had a solid core of talent around Arenas including all-star caliber players in Caron Butler and Antwan Jamison. They were really quite competitive during that time period meeting LeBron James’ Cavaliers in the postseason three consecutive years. All resulted in elimination. The 2006 postseason being the best example with Arenas going toe to toe against the LeBron averaging 34 points a game on 46% shooting from the field and 43% from deep during a hard-fought six-game series. But, that would be the last time a healthy prime Arenas would be that effective in the postseason as injuries derailed him the rest of his career.

The alter ego Agent Zero helped pioneer the game for score first guys like Steph Curry, Kyrie Irving, Damian Lillard, and Kemba Walker who have all stapled the three-point game into their all-around scoring arsenal. Arenas’ very own podcast; No Chill Podcast lets you into the intelligent basketball mind Arenas possesses and he unlocks dimensions of the game from a physiological standpoint and how to combine it with raw talent as well as his experiences in the league. Arenas wrapped up in an interview about bumping into Kobe at an AAU tournament stating “We’re at the gym and Kobe’s Mamba team is there, so we go shake hands and then he tells his daughter, ‘This is the m****** that scored 60 on me, can you believe that s***?’”. A guy like Arenas won’t get celebrated as he should be, but perhaps Kobe was on to something in the first place.