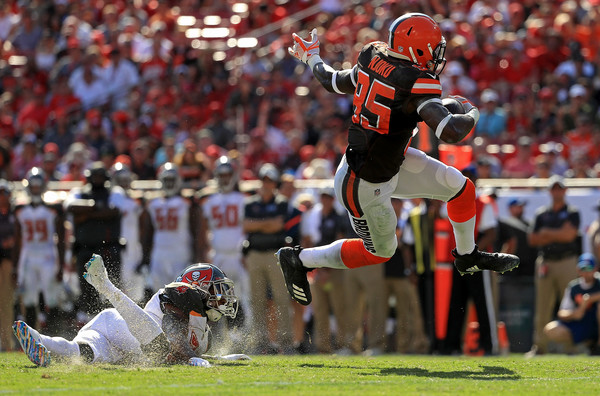 Share
Tweet
Share
Share
Email
Comments
CLEVELAND- Something odd is happening in the Cleveland Browns organization. It may not seem surprising that the Browns have something bad happening to them given that the team has the worst overall record of the decade, but this development is still shocking. Tight end David Njoku fired his agent, hired Drew Rosenhaus, and demanded a trade.
Pump the brakes for a second. Why on earth would Njoku demand a trade given the fact that new Browns head coach Kevin Stefanski uses a two tight end system? What is logical about this? The Browns signed free agent tight end Austin Hooper then drafted Florida Atlantic’s, Harrison Bryant. The offseason moves likely made Njoku question his future on the Browns.  It’s also possible that Njoku thinks that his future is in jeopardy since he is no longer the number one tight end.
Nkoju welcomed the competition at first. Something quickly changed. Perhaps someone informed him that he needs to think about his NFL future and accept the Browns did not act in his favor with the two offseason moves. It seems doubtful that Njoku demanded a trade without insight from someone in the NFL. Something doesn’t seem right. Perhaps Njoku made this decision on his own. It’s a mystery how he came to desire a trade.
The Cleveland Browns may get a fourth or fifth-round pick in return, but Njoku’s value on the trade market isn’t that high. Njoku has great athleticism but the numbers prove that he’s just not a number one tight end. He caught 32 receptions in 2017 despite 60 targets. He caught 56 passes in 2018 despite 88 targets. He didn’t get many opportunities for receptions in 2019 since he suffered a broken wrist during the week two Monday Night game against the New York Jets.
Potential trade package to the Jacksonville Jaguars
It would be best to make Njoku available in a trade package for a bigger haul. The Browns could trade him to Jacksonville with a first-round pick for defensive end Yannick Ngaouke. It would be odd having two star right ends on the roster but Myles Garrett and Ngaouke Njoku should be able to play on opposite sides of the defensive line.
The Packers and Browns are supposedly discussing a trade. Cleveland wants to keep Njoku but a trade seems inevitable.