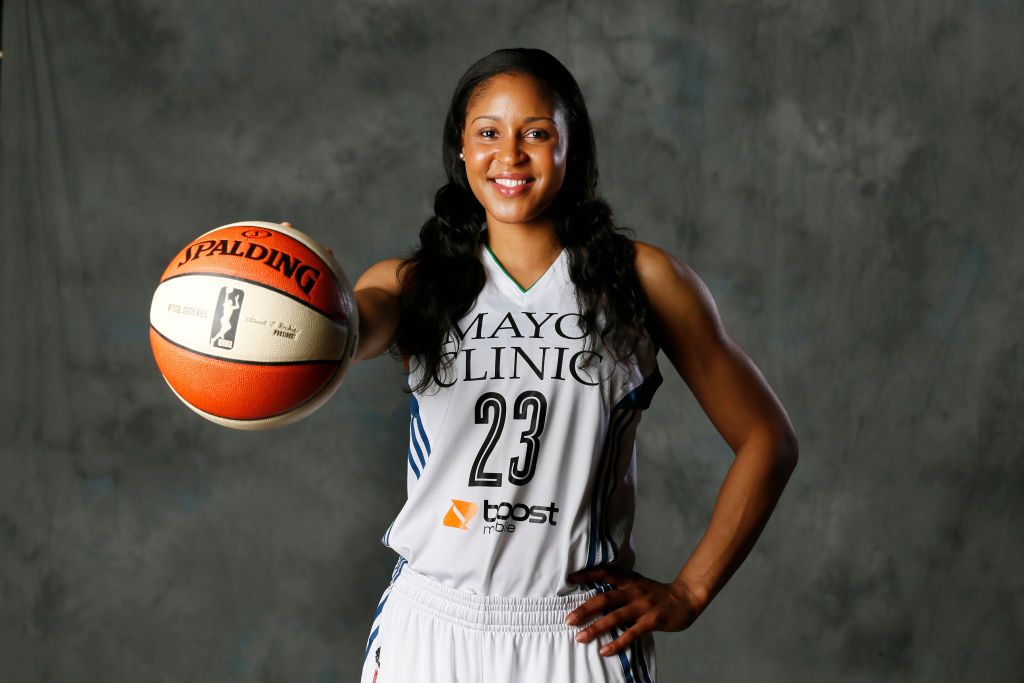 Maya Moore has already reached the height of success in her basketball career.

A two-time (back-to-back) national champion in 2009-10 as a member of head coach Geno Auriemma’s stellar UConn Huskies’ hoops program (2007-11), Moore’s dominating collegiate career illuminated her path to being selected No. 1-overall in the 2011 WNBA Draft by the Minnesota Lynx.

As the face of the Lynx, Maya’s WNBA career hasn’t disappointed. In fact, it’s been arguably the best career any woman has had since the league’s inception. Sports Illustrated has spoken of her as the greatest winner in the history of women’s basketball. Still young with fresh and rested wheels, the 31-year-old still has plenty of tread on her tires.

Instrumental in helping the Lynx reach WNBA glory (2011, 2013, 2015, 2017), Moore’s now a four-time champion. I could go on-and-on about the 6-foot-0, 175-pound small forward from Jefferson City, MO, and her extraordinary hoops talent, but the game certainly doesn’t define who Maya is as a trailblazing woman.

Since surprising the basketball world with her decision to take a sabbatical from the game before the 2019 WNBA regular-season, Moore has spent the majority of her time putting the proverbial round-ball into another basket. Her fight for justice.

Incarcerated at 16 for burglary and assault (non-fatal gunshot wound to the victim’s head), Jonathan Irons was in desperate need of a powerful voice in the middle of his 50-year sentence. As it turns out, Maya’s voice has been the one that’s registered for Mr. Irons on another decibel level.

Moore’s Christian faith defines her character. With it, she delved deep into Irons’ case — a conviction cluttered with errors. Maya also gravitated to family and ministered in Atlanta during her hiatus from hoops. Mentally and physically drained from her professional basketball grind, Moore needed significant respite.

Maya told The New York Times in a telephone interview back in January, “I’m in a really good place right now with my life, and I don’t want to change anything. Basketball has not been foremost in my mind. I’ve been able to rest, and connect with people around me, actually be in their presence after all of these years on the road. And I’ve been able to be there for Jonathan.”

Moore met Irons in 2007 during a visit to the Jefferson City Correctional Center in her Missouri hometown and later believed that he was wrongfully convicted. There were no witnesses, fingerprints, or DNA evidence connecting Irons to the crime. In fact, the officer who interrogated Irons after his arrest did so alone, and simply did not record the conversation. Hmmm.

Putting in the work as she does on the court, Maya was a game-changer in Irons’ defense. On March 8, 2020, Judge Dan Green overturned Jonathan’s 1997 burglary and assault convictions. After serving 23 undeserved years in prison, Irons was finally able to breathe again.

Unfortunately for Mr. Irons, the fight isn’t over. After uncertainty in regards to the appeals process, the state of Missouri filed an additional motion on June 8th. A request for the case to be transferred to the Missouri Supreme Court. The decision could take another three weeks to be decided. If this motion is denied, St. Charles County has the authority to retry the case. What? Yup. That’s correct.

Let’s look at the worst-case scenario here. A decision by the county to retry Irons may mean he won’t be released from prison, period. Join me in praying for this innocent 40-year-old man to dodge these horrifying laws, and be freed from behind bars.

Thank goodness for Maya Moore. Without her in the picture, Jonathan Irons most likely didn’t stand a chance. On the hardwood, Moore can dribble-drive her way to the tin with ease, knock-down a mid-range jumper, and let it fly with her gorgeous stroke from beyond the arc. Additionally, Maya can extinguish the competition on defense, has rebounding prowess, and can serve up a delicious dish as well.

In my opinion, she has the ability to go toe-to-toe with most dudes in the NBA. She’s that good with the basketball. Now, Moore’s added justice enforcer to her arsenal. No matter what, she’ll miss the entire 2020 WNBA season in her pursuit of reform. Well done, Maya.