University of Miami pitcher Brian Van Belle inked a deal with the Boston Red Sox on Monday, becoming the sixth North Shore player to be drafted by or sign with a MLB organization over the last two years. Van Belle, who pitched for the Navs in 2017, was chosen as a Collegiate Baseball Newspaper Second Team All-American and D1baseball.com’s top senior pitcher following his shortened 2020 season with the Hurricanes. 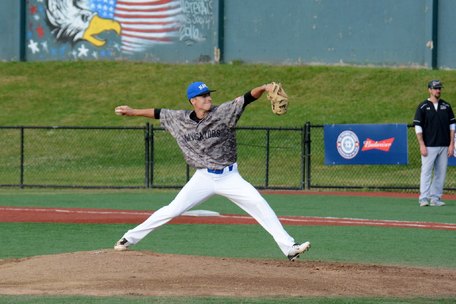 Van Belle was one of the most dominant pitchers in the country this spring, posting a 2-0 record and the Atlantic Coast Conference’s third-lowest ERA (0.68) in four starts. He struck out 38 batters, walked just four and held opponents to a .168 batting average over 26.1 innings of work.

The Pembroke Pines, Fla., native was the National Collegiate Baseball Writers Association’s National Pitcher of the Month for February as he started a stretch of 26.1 consecutive innings before allowing his first earned run of the season. During a Feb. 28 win over Towson, Van Belle recorded a career-high 14 strikeouts.

Van Belle started three of the five games in which he appeared for the Navs in 2017, striking out 13 in 14.2 innings. He was attending Broward College at the time.

Boston is the 24th different organization to sign a former North Shore Navigator since the team’s 2008 debut in the New England Collegiate Baseball League. North Andover’s Sebastian Keane was an 11th-round draft pick of the Sox just a year ago, but he opted to pitch for the Navs in 2019 and then begin his college career at Northeastern University.

Van Belle earned Collegiate Baseball All-America honors along with 2020 Navs infielder Cody Morissette, a rising Boston College junior who ranked second in the ACC with a .448 average this spring.

The Navs are now preparing for the 13th season of collegiate ball at Fraser Field and their ninth in the Futures League, which will begin on a date to be determined this summer. Stay up to date on the latest Navs news by visiting nsnavs.com and following us on Facebook, Twitter and Instagram.