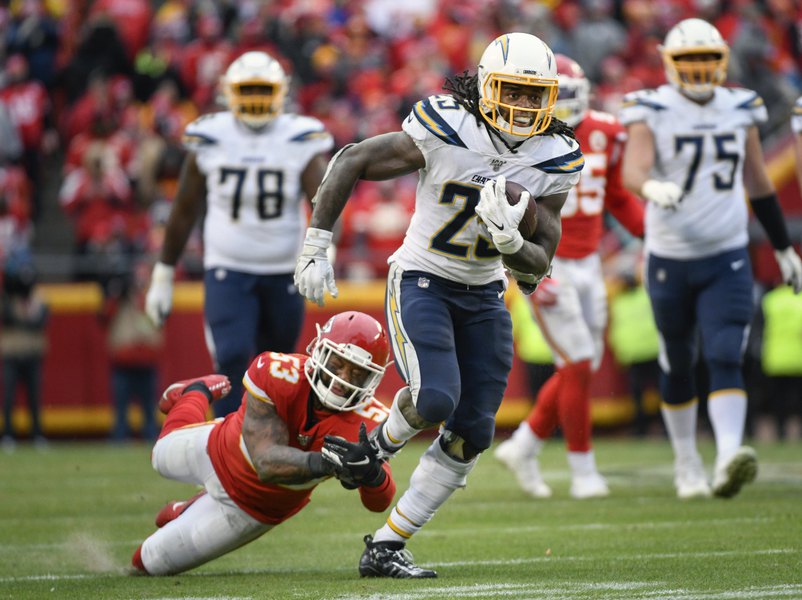 High-octane Denver Broncos’ running backs Phillip Lindsay and Melvin Gordon are the best backfield combination in the AFC West. This is just my opinion, but I’m probably right. Instead of the cliche “Thunder and Lightning” theme you often hear with RB duos, Lindsay and Gordon are more of a two type of lightning threat. Mr. Gordon, formerly of the Broncos’ AFC West rival Los Angeles Chargers, produces a wider and shorter bolt of lightning. On the other hand, Mr. Lindsay generates a thinner yet longer strike. This is analogous to the fact that they both have speed and power, but utilize their skill sets in varying ways.

It’s hard to find a back in the NFL that has ridiculous speed and power at 5-foot-8 and 190-pounds, but Lindsay possesses just that. As for Gordon, he’ll bring a little extra thump in the red zone and at the goal-line. I’m not a meteorologist, nor do I pretend to be; however, with Mr. Gordon’s listed height and weight of 6-foot-1 and 215-pounds, you can’t tell me that he reminds you of thunder. Okay. If he was 6-foot-4 and 250-pounds, you’d have a point. Thus, I’m sticking with Phillip and Melvin being my “Lightning and Lightning” combo in Orange and Blue. Without a doubt, Broncos Country loves Lindsay. What’s not to love? Uh, nothing. However, if you split the snaps between Gordon and Lindsay, the Broncos’ offense becomes even more potent and frightfully dangerous.

A University of Wisconsin Badgers’ product from Kenosha, WI, Gordon was drafted No. 15-overall in the 2015 NFL Draft. Time to prove your metal with that gargantuan contract, Melvin. Mr. Gordon exhibits dazzling field quickness with the ability to hit full-speed on his second stride, ludicrous jump-cutting skills, great shoulder pad leverage awareness, a nasty stiff-arm, and can flat catch the football out of the backfield.

Here’s a YouTube video showing what Gordon’s capable of doing in Denver’s offense.

In my piece from last week, I mentioned that the Broncos’ organization needs to pay the man. Of course, I’m referring to Mr. Lindsay. C’mon. A salary of $750,000 after tallying back-to-back 1,000-yard seasons is a slap in the face. Then, as aforementioned a week ago, you’re giving Mr. Gordon a two-year, $16 million deal. What? Give me a break, divvy that cash between both RBs, and leave it alone. The same amount of money, equal touches of the pigskin. It isn’t really that simple, but it should be, my friends.

I get it that Lindsay is a hometown hero in the Mile High City. He should be. Making the roster as an undrafted rookie, and doing what he’s done in two seasons in Denver, shouldn’t go unnoticed. That being said, take a look at Gordon’s accolades as a 2015 draftee. As a Charger, Melvin accumulated 4,240 total yards toting the rock on the ground. A 4.0-yard per rush average isn’t bad, and 36 trips to the house will certainly get your attention. Additionally, Mr. Gordon has shown his prowess as a pass-catching RB, squeezing 224 pigskins for 1,873 total yards through the air. With 11 trips to the heezy in the passing game, simple math gives Gordon 47 touchdowns in his NFL career. Not bad, folks.

Because Gordon’s pass-catching ability is extraordinary, Lindsay has been working on his receiving skills tirelessly this offseason. That’s scary for the rest of the AFC West as well as the entire league. New offensive coordinator Pat Shurmur’s scheme is designed to implement RBs in the passing game as much as possible. Mr. Lindsay’s figuratively uber hungry to explode in the upcoming 2020-21 NFL season. Mr. Gordon’s plan is to use Shurmur’s offense to his benefit. More than likely, they’ll both make their mark.

Add it all together, and the Broncos have two Pro Bowl caliber backs with a ton to prove. Feels like a backfield en route to a breakout season to me. Until next week, be smart, stay safe, and stay healthy.