Former Michigan QB Shea Patterson: Will he Sign with an NFL Team? 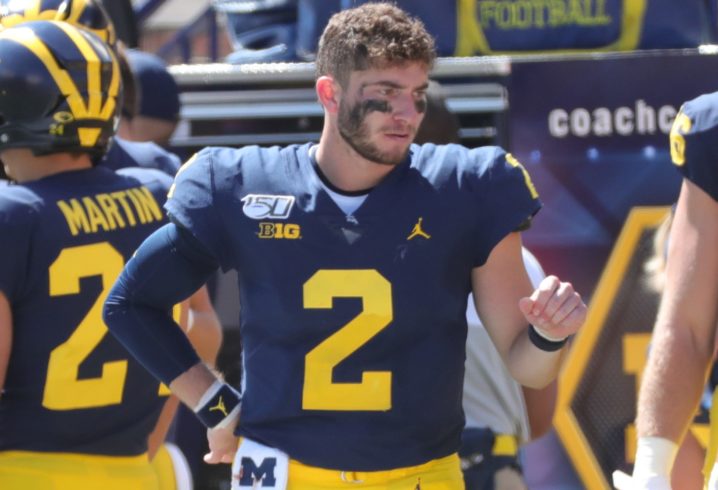 0
Read Time:1 Minute, 36 Second
Former Michigan QB Shea Patterson was hyped up as a 2019 Heisman candidate. The Michigan Wolverines were on the verge of closing the gap against the hated rival Ohio State. In fact, Patterson and the Wolverines were actually a threat to win the Big Ten and possibly for a national championship. What happened? Will Patterson ever get his chance to earn his place on an NFL roster.
The short answer not any time soon. There are questions about his arm strength and accuracy. He doesn’t throw with the tight spiral that he needs. He needs to bulk up a bit. Perhaps if he improves his upper build, NFL teams will notice that.  Quarterbacks that are 6’2″ tall need to be big and somewhat bulky in the NFL. We’re not talking linebacker or defensive tackle size. He simply needs to add some muscle.
There are skills that Patterson has that should at least gain the attention of NFL scouts and general managers. He has the mobility to evade tackles. This is a skill that will be become increasingly valuable in the NFL as coaches seem to favor more mobile quarterbacks over the traditional pocket passers. There is a new trend at quarterback so Patterson should benefit from that. He is capable delivering bullet passes when on the run so that is a valuable skill as well.
If Patterson develops better arm strength, strong upper body, and greater pass accuracy, the NFL will notice. There are doubts about him but this isn’t the time for Patterson to just waive the white flag and come up with a backup plan. It will be interesting to see what Patterson responds to the adversity. After all, everyone knows the phrase “Pressure creates diamonds”. Patterson wasn’t drafted by any team. He wasn’t signed as a free agent despite earlier reports that the New York Giants signed him.
Facebook
Twitter
Pinterest
LinkedIn