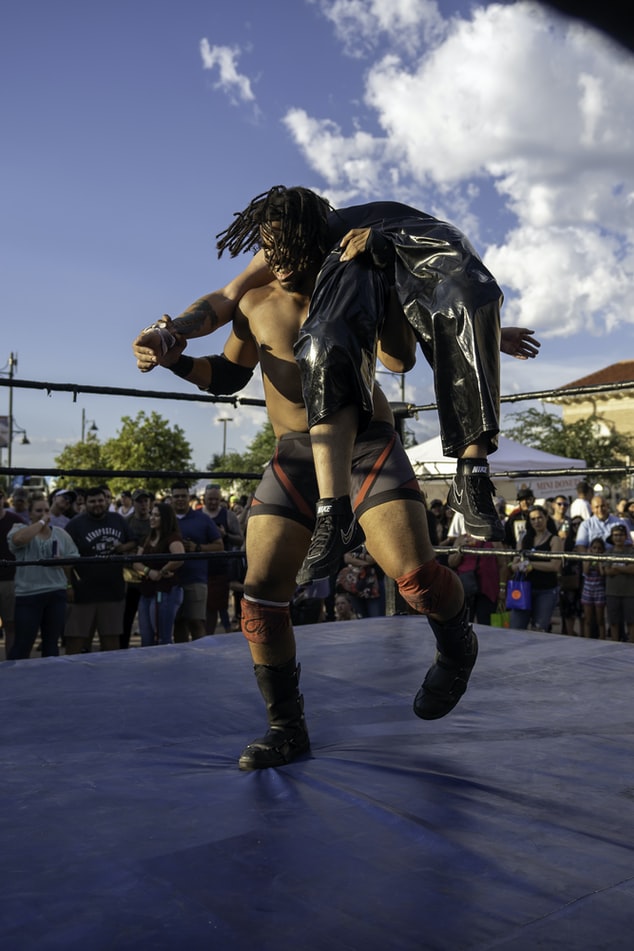 It’s the Fall of 2020. Due to the pandemic, NFL stadiums remains empty except for the two teams scheduled to play in each one on Sundays.  TV ratings are abysmal, the worst in league history. This is stark and alarming because the NFL has for many years been America’s most popular sport to watch.

Most disconcerting is that at half-times of these games people tune in by the tens of millions. All they want to see is the half-time show in a squared ring hovering over the 50-yard line.

Fans are mesmerized and excited watching the entertaining and bizarre actions of the charismatic and colorfully clad professional wrestlers who used to be part of the Worldwide Wrestling Entertainment (WWE) and Wrestlemania.

These performers are the ones who lost their jobs this Spring when the WWE layed them off for cost-cutting reasons tied to the pandemic’s economic standstill.

In the ring on the NFL field, No Way Jose rocks his lime green dreadlocks hanging down to his shoulders as he stands atop the ring ropes in one corner. Here it comes, you can feel it. He’s about to land his entire body on Hurricane Helms, who sports his black cape and skull T-shirt. A classic pile driver move. So much raw pain. It’s palpable and believable.

Bamb, right to the mat goes Helms. Is he injured? Can he get up? Should he? This looks dangerous.

On no, here comes Summer Rae and Sasha Banks to join the action. The pro wrestling women first start throwing each other around on the ground, which is compelling theatre. Then they focus their attention on No Way Jose and Hurricane. Will it be two men versus two women? Or will the match turn into co-ed teams?

What a circus. So much intrigue. So much to wonder about. So much libido and estrogen to take in. Is this fake? Are these people really trying to hurt each other? When they pounce on each other, does it hurt them? Who are these people? Where do they come from? Do they take acting lessons? Are they athletes? How did they get so muscular? How prevalent are steroids in this profession?

Who cares? It’s fun to watch.

Americans are riveted to their screens. It’s clear, based on TV ratings, they like this more than the NFL games. Once the second half starts, the TVs go off. Who needs to watch the NFL pump 30 minutes of commercials at you every hour? And who needs to sit around wasting our lives away while the refs go “under the hood” for 27 minutes to figure out if the officials made the right call?

Why can’t they watch the replay once and make a decision? That should take about 20 seconds.

Real football has been upended by fake wrestling. The truth no longer intrigues. Lies are in vogue. Untruths fly around society like flocks of birds. Do we even know what’s real anymore?

We’re so used to not being told the truth that the world of make-believe has become what we believe, what turns us on, what feels normal. So professional wrestling has become America’s favorite spectator sport.

Fans tune in for the half-time wrestling entertaining but tune out the NFL games. There’s more drama in watching characters do things that aren’t legitimate and staged (or are they) than watching players do boring things that are real (or is it?).

We have entered the realm of the post-pandemic new abnormal. Fake is in; real is out. Both have become blurry.

“I can’t believe how popular the WWE half-time shows are compared with the actual games,” said NFL Commissioner Roger Goodell. “How do we get NFL fans watching the actual games again? The truth is I get it. I would rather watch No Way Jose bounce around with Summer Rae than an NFL game. Three yards and a cloud of dust. Seven commercials. Time out. Commercials. Commercials. Under the hood. Back to commercials.”

How did this happen? Was it the pandemic that changed what Americans value? Is fake really more interesting than real? Or is football fake and professional wrestling real?

What is the truth? What is a lie?

What does this mean for other traditionally popular sports such as football and baseball? Are fans more interested in pro wrestling? If the NBA has these wrestling matches at half-times in empty stadiums, will fans only tune in for the wrestling and not watch the games?

A pandemic hit. Sports shut down. People stayed in their houses for many weeks and remained six feet from each other. And now this – a rise in popularity of things that aren’t real. Are we escaping from reality?

Football was supposed to give us an escape. But not that’s not enough. We need more. We need to burrow deeper into the world of fantasy. Was the pandemic so real we can’t take reality anymore?

The sports world has reached an inflection point. We are a changed nation. We are confused and yearning sports fans. But for what? We’re grasping for something.

We’ve wrapped our arms and hearts around professional wrestling. Is there any turning back? Or have we reached the point of no return?