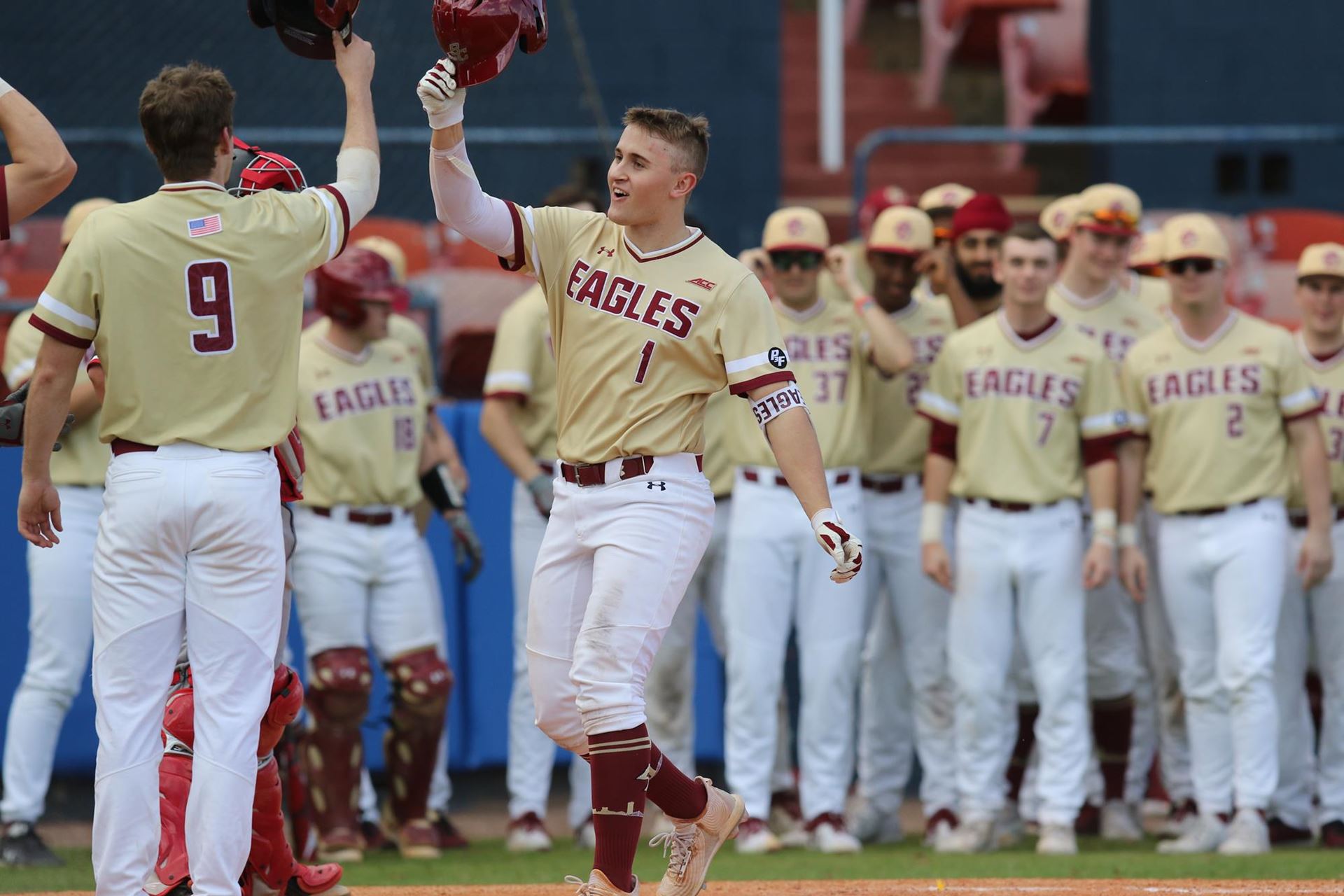 WINTER HAVEN, Fla. – The Boston College baseball team swept a Saturday doubleheader against Northern Illinois by scores of 11-10 and 8-5 at Chain of Lakes Park. The BC Eagles, who walked off with the win in game one, moved to 3-0, while the Huskies dropped to 0-3.

Sophomore right fielder Sal Frelick (Lexington, Mass.) delivered the game-winner in the opener; a two-out single through the right side on an 0-2 pitch. BC saw a 10-8 lead slip away in the top of the ninth before rallying for three runs in the bottom half as senior designated hitter Joe Suozzi (Glen Cove, N.Y.) singled and senior first baseman Jack Cunningham (South Riding, Va.) doubled to set the table for the comeback.

NIU scored in each of the first three innings, two of which were unearned, against redshirt-junior lefty Joey Walsh (Plymouth, Mass.). He gave up four hits, five walks and struck out one. Walsh battled for five innings; keeping the game tied before the Eagles jumped back ahead in the bottom of the fifth to give him a chance at the win.

Despite giving up the game-tying hit, freshman right-hander Brian McMonagle (Moorestown, N.J.) got the win by pitching the final out of the top of the ninth. McMonagle saw action again in game two; tossing 1.1-scoreless for his first career save.

Boston College scored in seven of eight turns at bat en route to an 8-5 victory in the nightcap. Frelick reached base all five times; singles in his first two at-bats followed by three walks. He scored four times. Cunningham went 3-for-4 with a RBI-double and Suozzi was 2-for-4 with a RBI.

GAME ONE BC HIGHLIGHTS

·       Gold ignited a five-run second with a game-tying, three-run home run; the first of his career.

·       BC’s first lead came in the second on a double to right-center by Baldelli.

·       In his debut, freshman RHP Barry Walsh pitched a 1-2-3 sixth. He allowed one run in the outing; coming in his third and final inning of relief.

·       Frelick picked up his first career walk-off hit on an 0-2 pitch through the right side in the ninth.

·       The Eagles went back in front when Sal Frelick reached for the fourth time of the night and scored from third on a two-out single by sophomore second baseman Cody Morissette.

·       Gold added his first career multi-hit game with a single.

·       Suozzi extended his career-best hit streak to seven games with a single in game two.

The Eagles and the Huskies meet for the final time this weekend with a noon first pitch on Sunday.