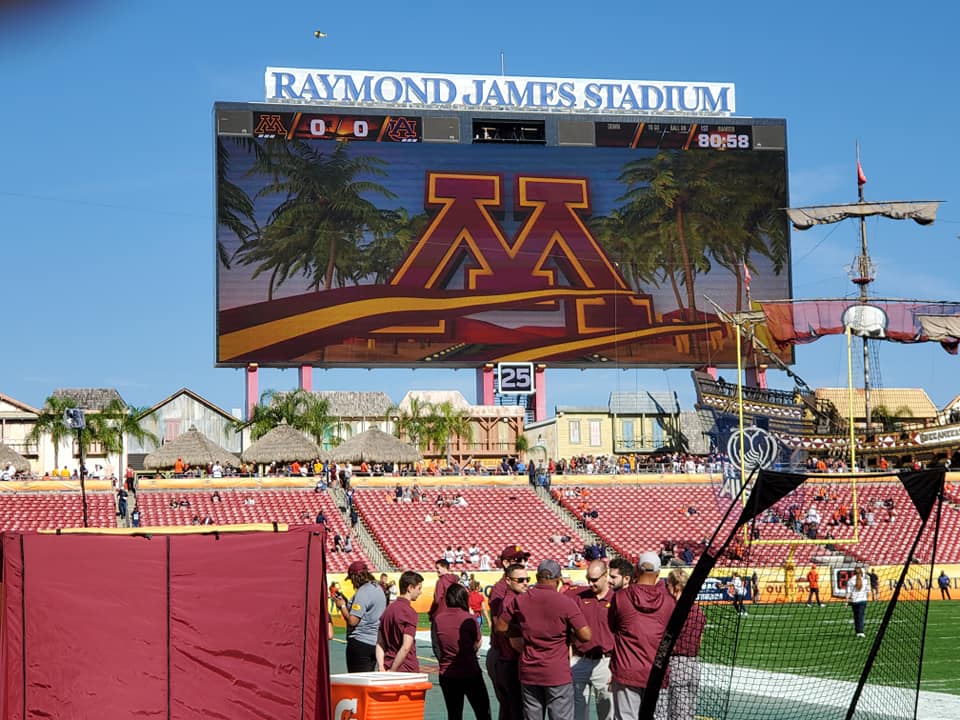 Under a rather cool Florida afternoon, with the temperature in the upper 60’s, this was the 34th Outback Bowl. This was the 32nd time it was held on New Years Day and also the 25th year that Outback has been the title sponsor. This year’s game was between The Auburn Tigers and Minnesota Golden Gophers. The Tigers are from the SEC and the Golden Gophers from the Big 10. Out of the 26 previous matchups, the SEC holds a 16-10 record and have had a 10-7 record since 2003. Both schools were well represented as far as fan bases go. As I was sitting in the press box at Raymond James Stadium both teams’ colors were well represented. The Auburn Tigers were wearing their blue tops, white pants, and white helmets. The Minnesota Golden Gophers were wearing white tops, garnet pants, and gold helmets. The attendance for the game was 45,642 as announced midway through the second half.

The Auburn Tigers won the coin toss and deferred to the second half. The Tigers defense gave up some rushing yards but jumped a route on Minnesota first pass play and intercepted it. They turned the interception into a field goal on four plays and took an early 3-0 lead. The Gophers bounced back after the turnover and drove down to the 22-yard line and kicked a 40-yard field goal which put the score at 3-3. The Tigers then immediately answered with a 96-yard kickoff return and took a 10-3 lead. That was the first kickoff return for a touchdown in Outback Bowl history. The Tigers forced the Gophers to punt and the punt was muffed by Auburn and the Gophers recovered it. Minnesota took the muffled punt and turned into a touchdown and tied the score at 10 with a Mohamed Ibrahim 16-yard touchdown run. It was an exciting first quarter.

The Tigers had some play go their way and ones that didn’t to start the second quarter. In the end, quarterback, Bo Nix punted and pinned Minnesota back. The Golden Gophers drove 98-yards with a combination of run and pass. They ended the drive with a 1-yard touchdown pass on fourth and goal to tight end Bryce Witham and took a 17-10 lead. No matter what, the Minnesota faithful were energetic. Auburn fans were, at some points, in awe. Auburn did not shy away from going for it on fourth down. They converted on a fourth and five and quarterback when Bo Nix hit his wide receiver, Sal Cannella, for a 37-yard touchdown pass that tied the game at 17. As the half came to an end the Golden Gophers got an incredible one-handed catch by wide receiver Tyler Johnson to take a 24-17 lead going into the half.

What an exciting first half it was as the teams went back and forth. Both teams shined at certain points. The Gophers were the better team on offense. They had 291 yards in the first half. Their offense was very balanced with 150 passing yards and 141 rushing yards. The Tigers were lucky to be only down seven points. Outside of the interception and a kick return, their offense sputtered for most of the half with 110 total yards. Most of that was in the air (105 yards) as their run game only mustered five yards. Minnesota and Auburn converted on their only fourth-down tries. My thoughts were that the Gophers would change very little coming out from the half, but the Tigers would have to make some major adjustments.

The Gophers came out and surprised everyone with a low kickoff to begin the second half. Both teams had three and outs on their opening drives of the half. Auburn found some offensive rhythm on an 86-yard drive and even after a fumble near the goal line, JarTarvious Whitlow had a one-yard run by jumping over Minnesota players to tie the score at 24.  Minnesota tried some trickery and completed a huge pass play to Tyler Johnson (12 catches for 204 yards, two TDs) only to have it brought back because of a holding penalty on Chris Autman-Bell. The Tigers tried a fake punt, but it failed. The third quarter ended at a 24-24 tied which led to an exciting final quarter.

To start the fourth quarter, the Tigers defense came up with a big stop on fourth down. The Gophers fumbled the snap and came up short. Later on, there was a big play for the Gophers as quarterback Tanner Morgan hit Johnson on a 74-yard touchdown pass that put the Gophers up 31-24. Auburn was unable to come up with an answer and the Gophers faithful loved it. Minnesota called their first timeout and head coach PJ Fleck was telling his troops they could put the game away with a first down. On the other side of the field, head coach, Gus Malzahn was telling his players to stop them so they could have a chance to drive down and try and tie the game. The Gophers converted a fourth and one with an 11-yard pass and half the stadium erupted. Row the Boat cheers emulated for the Gophers fans.

Coach Fleck was running up and down the sidelines in excitement! With a late first down, many of the Auburn faithful headed towards the exit. Fleck was also upset with the officials and let them know about it. Mohamed Ibrahim set a Golden Gophers record with the most rushing yards for any Minnesota player in program history. The Golden Gophers offense took the victory formation with just over one minute left. Three plays later, the Gophers sealed an Outback Bowl win 31-24. The game was a tight rope game but in the end, the better team won.