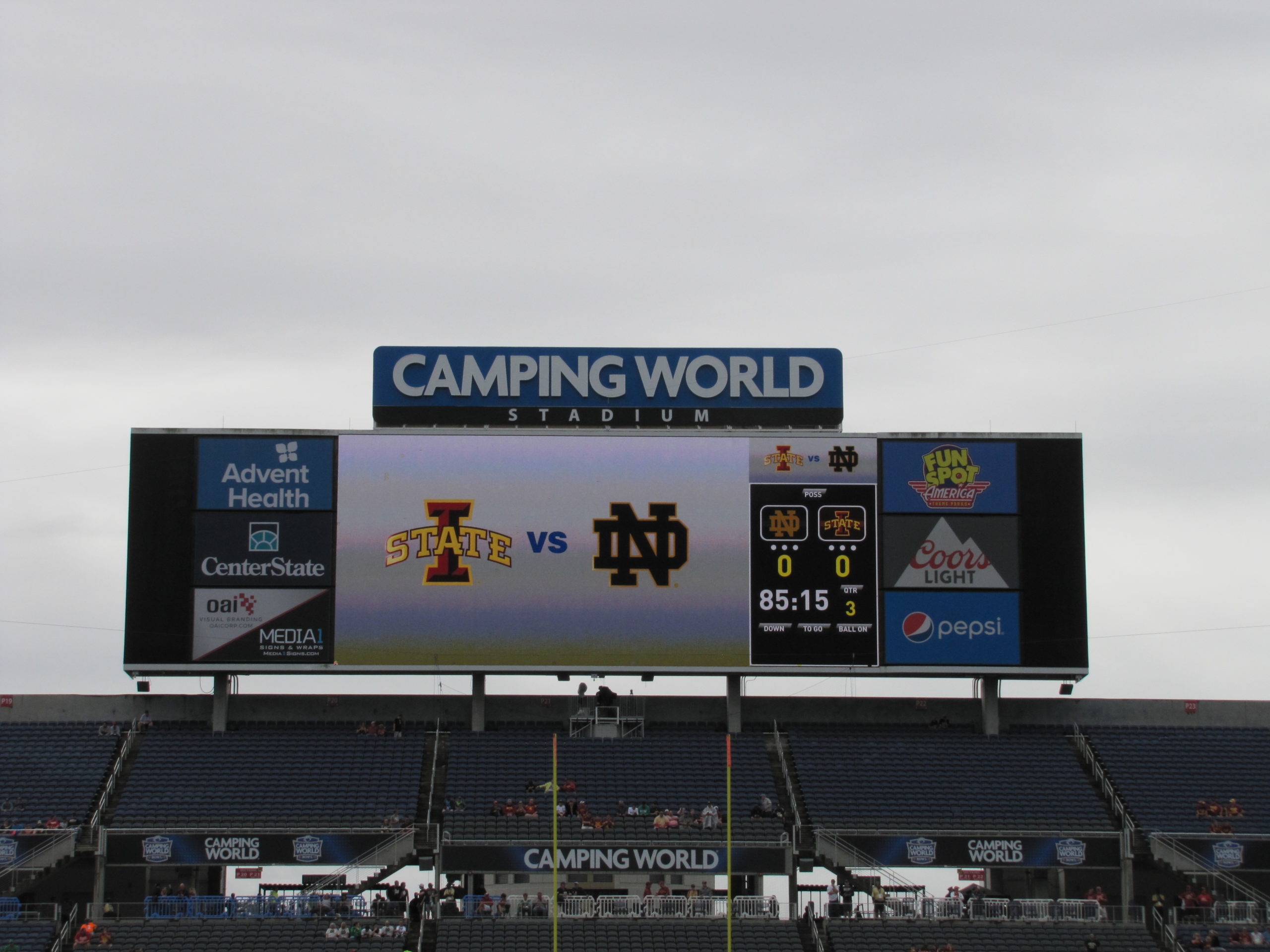 On a humid, but mild day in Orlando, the independent Notre Dame Fighting Irish overcame a slow start before pulling away and defeating the Big XII’s Iowa State Cyclones 33-9 to win the 2019 Camping World Bowl. Despite the younger of the two programs having football since 1892, this was the first meeting between the two schools.

The Camping World Bowl opened with a lot of energy from both fan bases. Notre Dame won the toss and elected to receive. After opening with a three-and-out, Notre Dame was able to score first by taking advantage of a Tarique Milton fumble on the ensuing punt. The Irish offense struggled on the drive outside of a fourth down and six conversion by senior Irish quarterback Ian Book, but was close enough for Jonathan Doerer to kick a 39-yard field goal to give the Irish a 3-0 lead, a lead they would never relinquish. 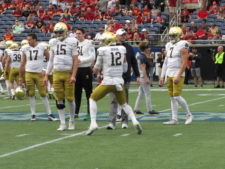 The following possession didn’t end well for the Cyclones. Sophomore Quarterback Brock Purdy was stripped and Notre Dame’s Jeremiah Owusu-Koramoah recovered. The Irish took advantage of the short field with another fourth down conversion by Book before he connected with Chase Claypool for a 24-yard touchdown pass to extend the lead to 10-0. Desperate to stop the Irish momentum, freshman running back Breece Hall was able to get the ball into Irish territory on a 29-yard run before the quarter ended. The drive stalled and the Cyclones had to settle on a 41-yard Connor Assalley field goal to make it 10-3.

On the Irish’s next drive, Claypool continued to make big plays and helped get into Cyclone territory before Doerer kicked a line drive 51-yard field goal to extend the lead to 13-3. The Irish momentum continued to roll as Iowa State drove near midfield before both teams traded timeouts. The Cyclones failed to convert the fourth and one. Book found Claypool again for 43 yards, which included the 6′ 4″ senior receiver carrying defenders all the way down to just outside the endzone. Jafar Armstrong took a pitch and ran easily into the endzone to continue the Irish onslaught to 20-3. The Cyclones final drive of the half showed some promise as Purdy opened going 4-4 and taking the ball all the way down inside the Irish 10 yard line before stalling yet again and had to settle for an Assalley 26-yard field goal to make it 20-6 Fighting Irish at halftime. 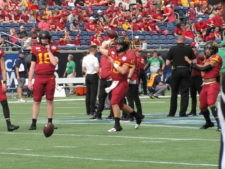 The second half didn’t get any better for the Cyclones. After a three-and-out to start the half, on Notre Dame’s first play of the second half, Tony Jones Jr. broke free for a Camping World Bowl record 84-yard touchdown to blow the game open at 27-6. For the last 20 yards or so of Jones’ run, he delivered a devastating stiffarm and carried a defender all the way into the endzone. After trading punts, the Cyclones were able to move the ball, but stalled once again and had to settle for a 42-yard Assalley field goal. The sun finally showed up and the Irish were able to drive once again, being stopped just outside of the endzone. Doerer added a 19-yard field goal to close the quarter with a 30-9 lead.

The fourth quarter was a lot slower for both teams. The Cyclone defense continued to show a lot of energy despite the deficit and held the Irish to only 58 yards of offense. The offensive light of Iowa State was finally snuffed out on Purdy’s final drive of the game, which started just inside Notre Dame territory and ending with a bad 15-yard sack on fourth down. Book, on his final drive, took the Irish down to the Cyclone 20 before Doerer added a 39-yard insurance field goal. In the closing minutes, the starting quarterbacks were pulled and the backups closed the game out to make it a 33-9 final.

Notre Dame won the offensive output yardage battle 455 to 272. Ian Book had a very efficient game, going 20-28 for 247 yards and a touchdown. Book also added 30 yards on seven rushing attempts. He avoided being sacked and had some luck of the Irish with Iowa State’s Marcel Spears Jr. dropping two would be interceptions. Tony Jones Jr. led all running backs with 135 yards on 11 carries with a touchdown while Chase Claypool led all receivers with 146 yards on seven catches and a touchdown. Claypool’s effort led to the media voting him as the Camping World Bowl Most Valuable Player. To show how dominant Notre Dame’s defense was in the second half, Notre Dame only had a 207 to 204 yardage advantage at halftime and the Cyclones were held to five yards of offense in the fourth quarter. 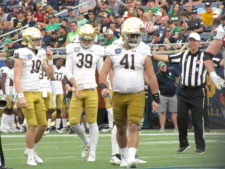 Notre Dame K Jonathan Doerer lines up for a field goal in the 2019 Camping World Bowl.
Photo by Andrew Gluchov

For the Cyclones, Brock Purdy had a fair game, going 17-30 for 222 yards and a fumble lost. Breece Hall had 55 yards on 17 carries along with 45 yards on four catches. La’Michael Pettway led Iowa State in receiving with four catches for 54 yards. Purdy and the rest of the offense struggled badly in the red zone, never finding the endzone. Oddly enough, Iowa State had better success on third down, going 5-15 while Notre Dame only went 3-13, but the Irish converted both of their fourth downs while Iowa State failed to convert on their two. Both team’s kickers had busy days. Jonathan Doerer went 4-4 on field goals and 3-3 on extra point for the Fighting Irish while Connor Assalley went 3-3 on his field goals for the Cyclones.

The 2019 Camping World Bowl’s attendance was 46,948, the highest since 2016 when in-state school Miami played West Virginia.