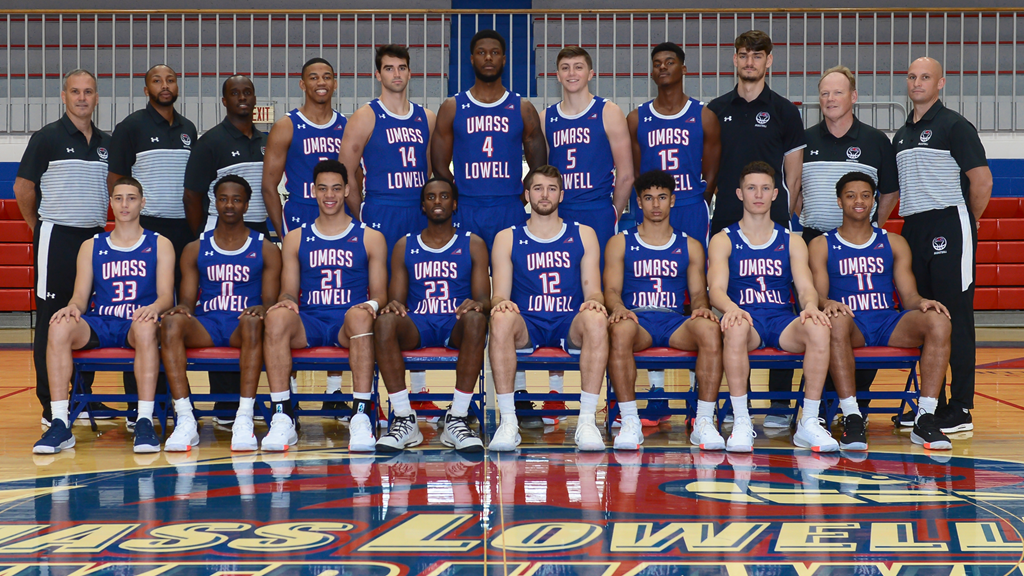 Share
Tweet
Share
Share
Email
Comments
LOWELL, Mass. – It’s the most wonderful time of year if you’re a basketball fan, as the 2019-20 season is about to get underway. This year, UMass Lowell Men’s Basketball Head Coach Pat Duquette and his squad will look to build off their most successful campaign to date and take the next step in their progress in the America East Conference. All the action gets started on the road against Massachusetts on Tuesday, November 5 in the annual Kennedy Cup Challenge game between the two in-state foes.

“I think everybody around the program is excited for the year,” said Duquette, who enters his seventh year at the helm of the River Hawks. “It’s one of the first years where we feel like we’ve got a core, talented group of upperclassmen, who bring some really good game experience, along with as talented a freshman group we’ve had. So we feel like if they can form some good chemistry and bring this thing together then we can have a really good year.”

The River Hawks completed the 2018-19 campaign with a 15-17 overall record, setting new Division I program records for wins and winning percentage (.469).

In America East Conference play, the team went 7-9 to take fifth place and match its best ranking for the third time since joining the league in 2013-14. UMass Lowell led the America East with 76.8 points and a DI program-best 15.6 assists per game.
“We didn’t talk a lot about wins and losses early in our time here,” explained Coach Duquette. “As time progressed and we became eligible for the conference tournament, I think our guys wanted to set more goals and had higher expectations for themselves. We are ready for the next step. We feel like we have enough talent and enough experience to get to the top half of this league.”

In order to break into the top half of the league standings and make strides this season, Duquette knows that his perennially strong offensive program needs to focus on the defensive side of the ball.

“As a team, defense has been an ongoing challenge for us and remains an important goal. We’re a really fun offensive team to watch, but we can be better defensively. I also think we need to continue to learn to take care of the basketball. Even though we score a lot of points, we’ve got to improve our turnover ratio.”

Lutete is the team’s top returning performer, averaging 18.7 points and 7.6 rebounds during the 2018-19 season. The guard, who shot a team-best 53.4% (213-399) from the field, was named to the America East All-Conference Second Team, in addition to becoming the program’s first NABC Division I All-Region First Team selection.

Noel turned in a strong sophomore season, finishing second on the team with 14.6 points per game while tallying a team-high 40 steals.

“I think it’s real clear when you look at our roster where our experience and maturity come from,” explained Duquette. “Josh, Christian and Obe have the most experience, so we expect a lot of leadership to come from them. But our other guys understand that the leadership is not going to come just from those three, it’s going to be collective throughout the team.”

“The biggest thing I look for in a newcomer is does he play with confidence, does he play without fear,” commented Duquette. “And that’s a big slogan in our program, something that we consider really important. This group, more than any I’ve had, has shown that they have confidence. They believe that they are good Division I players and they don’t play with fear. So that’s really encouraging for me to see. We are expecting them to contribute right away and help the team.”

The River Hawks have a 31-game schedule, including a Division I record, 17 home games. That home slate is highlighted by an eight-game, non-conference homestand, marking the longest in the program’s history. During the home stretch, which spans from November 12 to December 7, the River Hawks will host their first-ever regular-season tournament at the Division I level, welcoming Jacksonville, Merrimack and Dartmouth for the River Hawk Invitational on Nov. 15-17.

“We’re excited for our first tournament here,” added Duquette. “It gives us four more home games that we think are winnable. And then it also gives us the opportunity if we want to play the high major schools, we can go do that on our own. But this is a much more efficient, advantageous model of getting those extra games and doing it at home.”

Among the non-conference games on the road are two stops at those high-major opponents in Ohio State and Michigan. As usual, UMass Lowell will also play a home-and-home series against all eight of their America East opponents. For the first time ever, all of the River Hawks’ home games during conference play will be held at the Tsongas Center.

“We always have a balance with our non-conference schedule,” concluded Duquette. “We’re always going to play high major schools because our guys love that and get excited about it. We get great exposure for the program, so we will do that every year. And then we have a good combination of local rivalries. More home games is something we are most excited about. That’s going to be very important to establish ourselves early on before we get to conference play.”