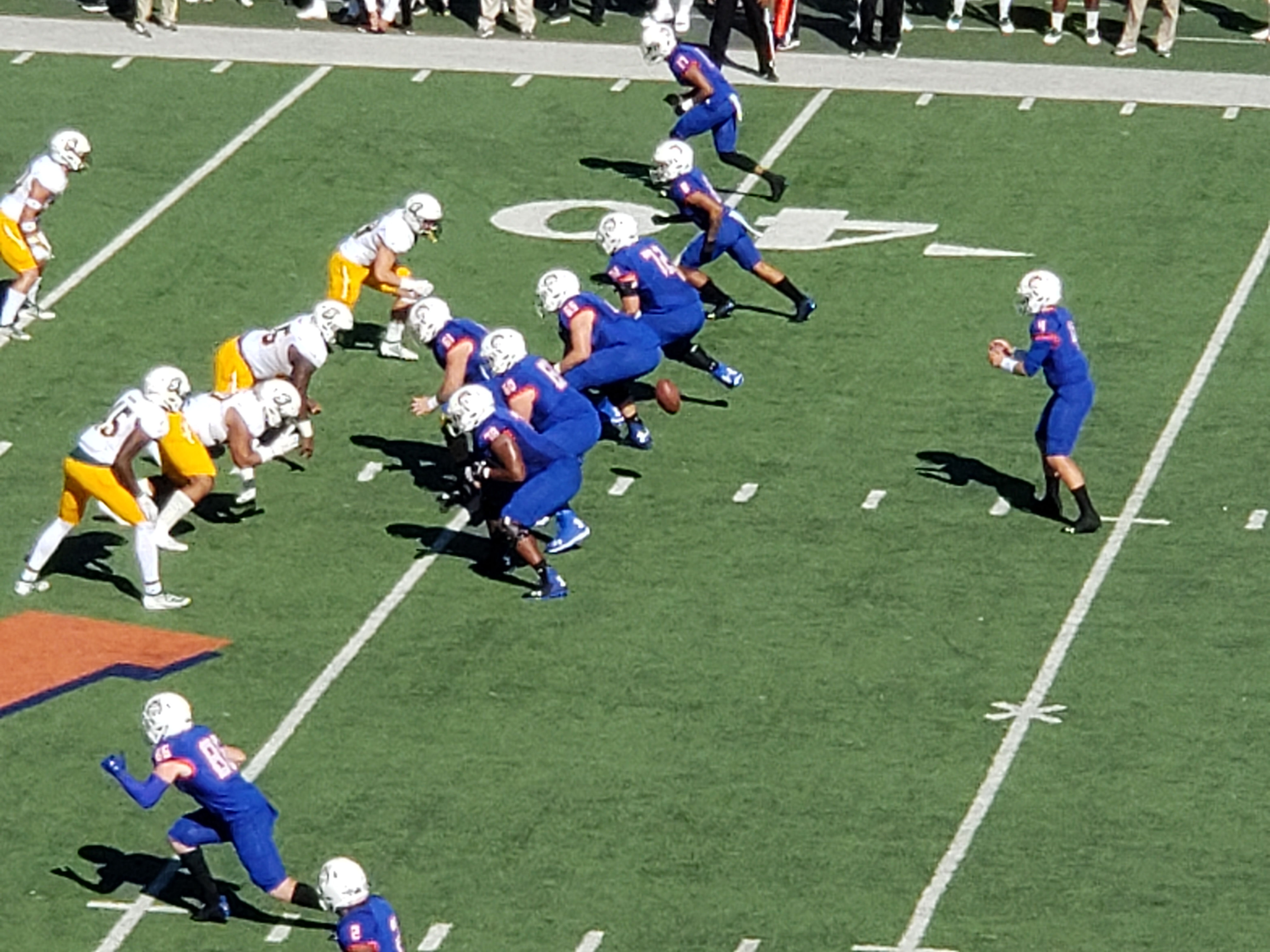 The college football season is now at that point where teams are setting themselves up for postseason play. For the Huskies of Houston Baptist, they were back home trying to snap a three-game losing skid. They started the year 4-0 and found themselves at 4-4, 1-3 in conference play.

They are led by their Junior quarterback, Bailey Zappe. He leads the nation in pass completions (266) yards (2,791) and touchdowns (29). The HBU running game has tanked the last two weeks going for less than 83 yards total on 53 carries for both games. For the Huskies to have a chance in this one, they would have to get the run game going.

It was a beautiful Fall day in Houston Texas with game time temps at 63 degrees. It was also Homecoming for HBU.

SLU took the opening kickoff at their 20-yard line. It took just one play to strike first when Lorenzo Nunez ran straight down the left side unchallenged and caught the ball in stride for an 80-yard touchdown. So with seven seconds gone in the game, it was 7-0 SLU. On the play, you could see the HBU defense get off the ball late and the DB could never recover.

HBU would get the ball and go three and out. Blake Patterson would get the punt off for 40 yards to the SLU 46 and Austin Mitchell would return it 29 yards to the HBU 29. On the next play, the Lions would fumble the ball back to HBU. Eight plays later, HBU would settle for a 43-yard field goal from Gino Garcia to make it 7-3 Lions.

After a muffed punt by SLU, the Huskies went back to work at the Lions 31. They would drive down to the 14, but they settled for another Garcia field goal to cut the lead to 7-6.

To this point in the game, the HBU defense was having trouble keeping up with the Lions offense. SLU could have easily had more points. But both teams appeared to not be in the groove this early in the game. The Lions would make a change at QB going to Cole Kelly.

Kelly would lead an 11-play, 75-yard drive that was capped off by a Taron Jones four-yard touchdown run to extend the lead to 14-6. On the drive, the HBU passing defense continued to play soft and give to much space to the Lions receivers. The next time the Lions got the ball, Chason Virgil would be back in at QB.

The second quarter saw both teams get into a punt fest. Neither could muster a drive as both offenses were off. HBU struggled much more unable to get anything going via the running and passing game. They were also having problems converting third downs.

Then, on third down, the Lions fumbled the ball and HBU recovered it. A closer look at the play made it appear that HBU never really had possession of the first fumble. It would not hold as Bailey would throw a pass that was deflected and then picked off by Ferlando Jordan and returned 97 yards for the touchdown. Just like that, a possible HBU score turned into a 21-6 Lions lead.

Finally, the Huskies would mount their first drive of the afternoon. They would start at their own 41 and move the ball 59 yards on eight plays. RB Ean Beek had two straight carries for 25 and 15 yards and then Bailey would hand it off to Jerreth Sterns who took it six yards to paydirt. That made it 21-13 with 2:05 to go in the half.

Once again the Husky defense would go soft allowing SLU to move down the field and score on a CJ Turner 15-yard touchdown catch from Virgil and it was 28-13 with 38 seconds left in the half. Again, it was the HBU defense not being able to stop the Lions when they needed to.

HBU’s problems started right away in the third quarter as they fumbled the kickoff and gave the ball to the Lions deep in their territory. Two plays later, Devonte Williams took the handoff and went 25 yards to make it 35-13 SLU. A later drive produced a field goal for SLU and with just under eight minutes to go in the third it was 38-13 Lions.

The onslaught would continue when Virgil hit Mitchell for a 70-yard touchdown pass that saw Mitchell get to the end zone untouched. Again, the defense of HBU just played too soft and gave Lions’ receivers too much room to operate. The defensive line had no pressure on Virgil as well. That made it 45-13 with 4:41 to go in the third.

In the fourth quarter, the Huskies found themselves fighting the same issues. They could not move the ball through the air or on the ground. The had no rhythm and Zappe just could not get untracked. With 6:35 left in the game, TE, Matt DeBlasio caught a 21-yard pass from Kelly for the touchdown. The rout continued and it was 52-13 SLU.

HBU made a change at QB and went with Andrew Haidet of Plano, TX. Zappe had done all he could and it just wasn’t much on this day. On his first drive in the game, Haidet hit DJ Dormeus for 37 yards on the highlight of the day for HBU. But Haidet would fumble the ball and the Lions got it right back.

Once the Lions got the ball back they just ran out the time and this one was in the books. The 52-13 loss makes four straight losses for HUB and they are now 4-5 and 1-4 in conference play. Next week is an off week and it gives the team time to work on how to right the ship.

SLU completely dominated HBU in all phases of the game. The Huskies managed just 15 first downs, 48 yards rushing, 211 yards passing for a total of only 211 yards of offense. Their star QB, Bailey Zappe was in a funk the whole game and finished 22-42 for only 156 yards and a pick.

The defense allowed 634 total yards to SLU with 489 coming through the air. The passing defense was very weak on this day. There were too many times SLU receives were wide open coming off the snap. Once the receivers caught the pass, HBU tackling was also very soft, to say the least. On third downs, HBU converted just three of 16 tries while SLU was eight of 16.