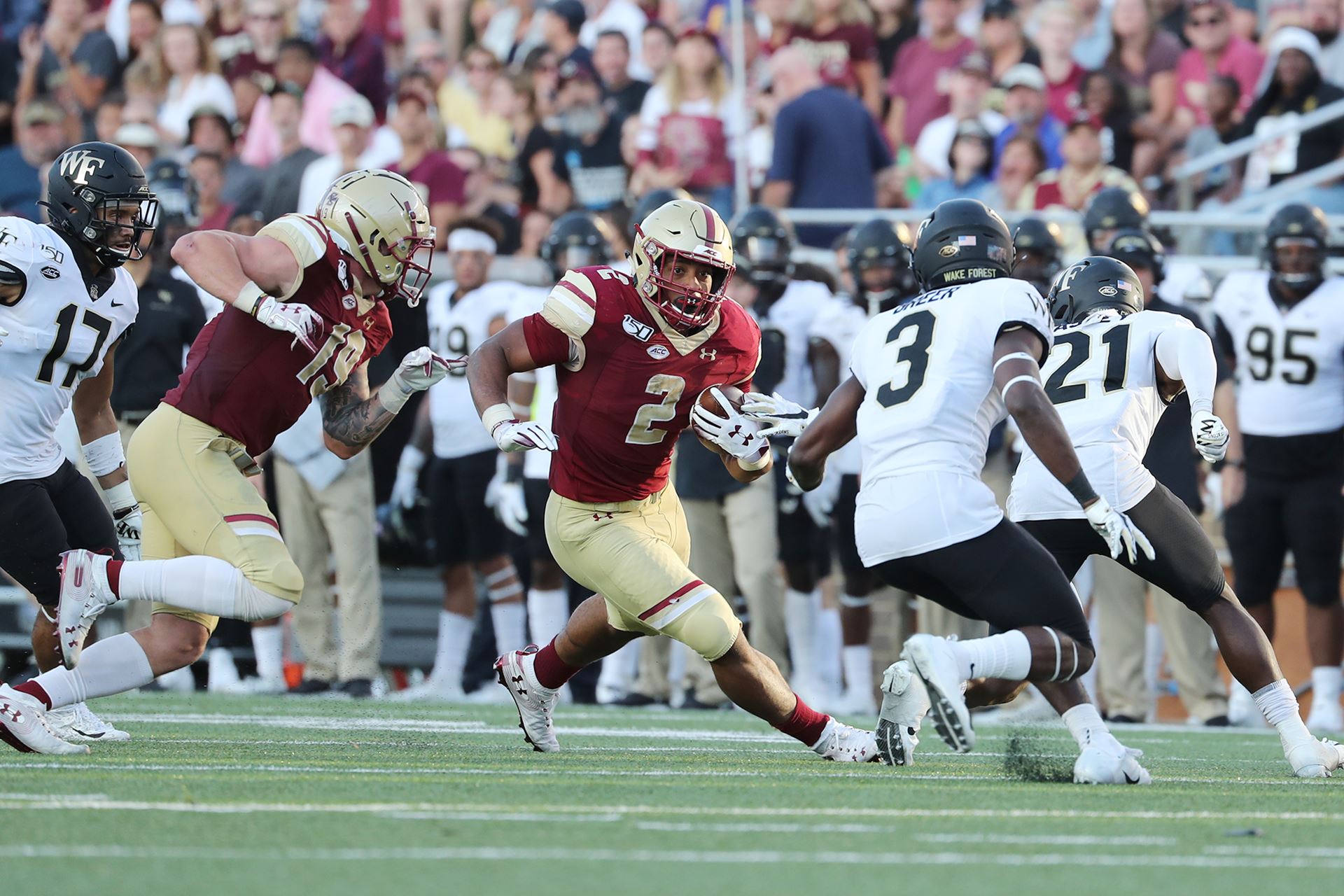 A great sun-splashed late September afternoon awaited both Wake Forest and Boston College. Both teams were looking to improve on what has already been a good month for each team. For Wake, this is the seventh time in school history they have started 4-0 and that start was bolstered by an offense that led the ACC in both passing average at 330 yards a game, and in total offense at 533.8 per game. A challenge was on tap for an Eagles defense that came into this game ranked 12th in the conference in defense and 102nd in the country giving up 458.3 yards a game.

The Demon Deacons won the toss and elected to get the ball to start the second half. Their defense created the first points of the game. On BC’s first drive of the game, QB Anthony Brown was picked off by Wake Forest CB Amar Henderson. For Henderson, the interception was his second of the year and for Brown, it was his first thrown interception in 103 attempts. Wake took the turnover and scored the game’s first touchdown on a five-yard run by Senior RB Cade Carney (first TD of the season).

A three and out by the Eagles gave the ball back to Wake. They turned it into more points as PK Nick Sciba knocked it through from 22 yards out. Two drives, two scores for the Demon Deacons to make it 10-0 after one quarter.

Boston College’s third drive of the game had much better results. It began with the Eagles run game ripping off yards. A.J. Dillon ran for 33 yards then Zay Flowers got 18. It set up the Eagles deep in Wake territory. The drive stalled and BC settled for a 22-yard FG by Aaron Boumerhi. 10-3 Wake.

Both teams would add one more score before halftime. Wake retook the lead when QB Jamie Newman (21-of-33, 243 yards, 1 INT, 2 TDs) connected with Sage Surratt from six yards out. That made it 17-10 Wake. Boston College tied the game just before the half ended. Brown threw his second touchdown of the half, this one to David Bailey for four yards to tie the game at 17-17. Brown completed four passes on the drive.

Wake Forest took the lead back with the only score of the third quarter on a field goal of 22 yards by Sciba. It was his second of the game and his 17th straight dating back to September of 2018. It was 20-17 Wake after three quarters of play.

In the fourth, the Demon Deacons took their largest lead of the afternoon as Newman hit Scotty Washington in the right corner of the end zone for a 27-yard score. Washington had five catches for 94 yards and a score.

Boston College missed out on a chance to get back to a one-score game early in the fourth. The Eagles were driving back down the field and put themselves in position to kick another field goal to get back to down seven. From the Wake Forest 31, the Eagles lined up to kick the attempt, but a delay of game penalty on what would have been a 44 yard FG took points of the board for BC. They would give it another try this time from 48 yards out. But a bad snap to the holder, backup QB Dennis Grosel, forced him to try and pass the ball downfield. The pass went incomplete and the Eagles turned the ball over to Wake Forest with 13 minutes left in the game.

Boston College did get it to a one-score game with 6:39 left. A play from their bag of tricks did it for them. A halfback option pass from Bailey to Chris Garrison down the left side to pay dirt to cut the lead to 27-24 Demon Deacons. On the drive following the score, Wake would convert three first downs to force the Eagles to use their timeouts. It caused BC to have any hope. They did get the ball back 95 yards away from the end zone with only twenty-eight seconds left. It was not enough time for BC to do anything with. Wake Forest won their conference opener and is 5-0 for the first time since 2006.

After the game, both head coach Steve Addazio and linebacker John Lamont (17 tackles a career-high) both said: “We needed to get off the field on third down on defense.” The coach thought it was a “heck of a game and that it came down to a thin margin.” The Coach also stated, “our football team grew today.” For the third straight week, A.J. Dillon finished with over 100 yards on the ground. (23-162 yards) and said, “the only stat that matters is winning and we came up short.”

The Eagles now get ready to head back out on the road as they head to Louisville next Saturday.