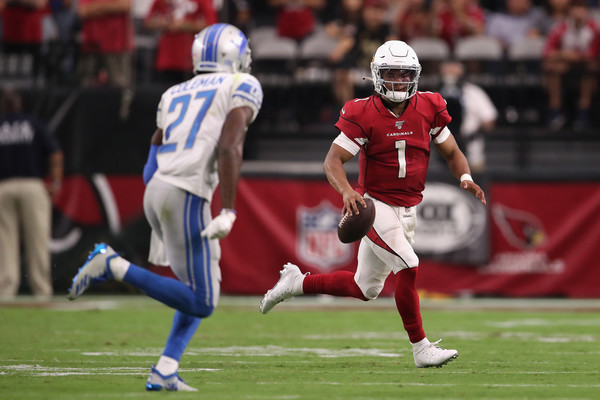 Some players really stood out in Week 2 Fantasy Football and earned a spot in fantasy owners’ starting lineups. Here are players that earned the nod for a Week 3 start.

1. Kyler Murray– Quarterback- Arizona Cardinals- Many experts and fans questioned his size. Many people doubted Murray’s ability to start. He silenced the critics in week two with 349 yards. Murray proved many critics wrong.

2. John Ross- Receiver- Cincinnati Bengals- A.J. Green’s absence created golden opportunities for the other Bengals receivers. Ross was no exception in the first two weeks. He caught four passes for 112 yards and one touchdown in the week one 41-17 loss to the Seattle Seahawks and their elite defense. He followed that up with 158 receiving yards and two touchdowns against the San Francisco 49ers.

4. Dalvin Cook– Running Back- Minnesota Vikings- Cook was projected to be a stud running back and he didn’t disappoint fantasy owners the first two weeks. He ran for 111 yards and two touchdowns against Atlanta then followed up with 154 yards and one touchdown against Green Bay.

1. Jameis Winston– Quarterback- Tampa Bay Buccaneers: Although his passer rating was solid for week two, Winston didn’t generate enough passing yards. He tallied 194 yards against San Francisco in week one and 208 yards against the Carolina Panthers in week two. He threw four total interceptions in the first two weeks and threw two touchdowns. He was projected as a dominant starter before the season but failed to perform at a high enough level.

2. O.J. Howard– Tight End- Tampa Bay Buccaneers- Howard suffered an ankle injury week one and that limited his production so far this season. He tallied four receptions for 32 yards in week one and didn’t catch any passes in week two.

4. James Conner– Running Back- Pittsburgh Steelers- Although Conner demonstrated dual-threat ability as he gained 44 receiving yards in week two, he was a bust overall in the first two weeks. He didn’t tally his expected totals in rushing yards. He tallied 54 rushing yards in two games despite 21 carries. He didn’t get the job done.
Sleeper Alert:

Daniel Jones– Quarterback- New York Giants- Jones passed the ball very well in the preseason and threw three completions out of four pass attempts in limited week one action against the Dallas Cowboys. He showed he was ready to take the helm. Jones was named starter for Week 3.