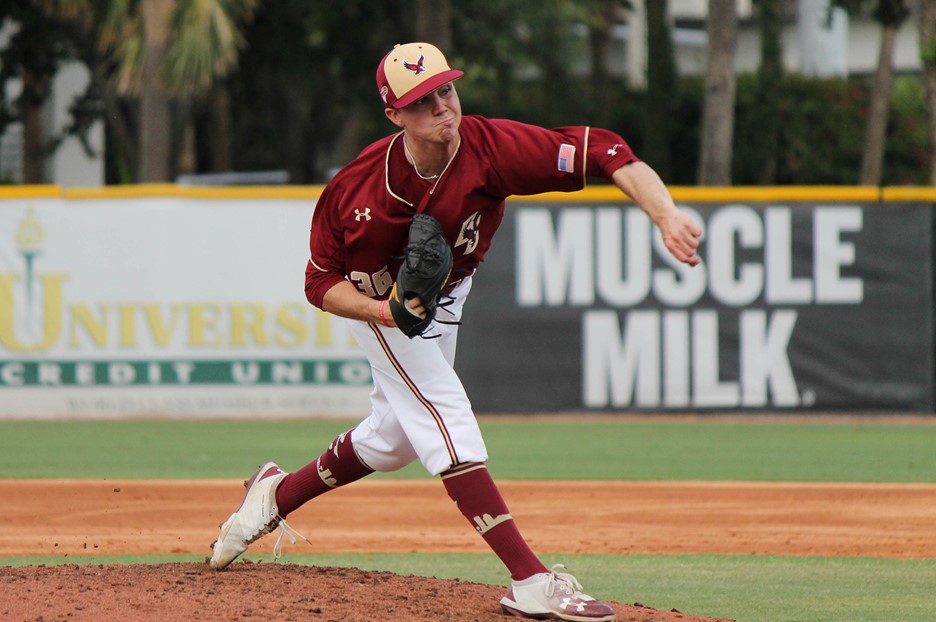 Boston College baseball hits the road for the fifth weekend in a row with its second ACC series of the spring starting Friday, March 15 at 6 p.m. against Wake Forest at David F. Couch Ballpark. The series continues Saturday and Sunday with all three games streamed on ACC Network Extra.

BC is 9-6 on the season after a decisive, 11-4 win over intrastate rival Holy Cross in its home opener at the Harrington Athletics Village on Wednesday. Freshman outfielder Sal Frelick remains the Eagles’ top hitter at .383, while leading the team in RBI (18), slugging (.633), walks (9), on-base percentage (.458) and stolen bases (11). Senior third baseman Jake Alu is second on the team with a .351 average and .579 slugging percentage. Frelick, Alu and junior first baseman Jack Cunningham have each hit three home run on the season. On the mound, senior lefty Dan Metzdorf returned to the rotation last Friday. He is 1-1 with a 0.77 earned run average and .105 batting average against in 11.2 innings. Junior RHP Matt Gill and freshman RHP Mason Pelio round out the BC rotation. Gill (2-1) has pitched a team-high 23 innings with a 4.30 ERA and .205 BAA, while Pelio is 2-0 with a 1.45 ERA in 18.2 innings.

Wake Forest is 10-8 overall and 1-2 in the ACC after taking one of three vs. Notre Dame at home last week and picking up a midweek win over Appalachian State on Tuesday. The Demon Deacons have hit 16 home runs on the year with left fielder Chris Lanzilli and designated hitter Shane Muntz leading the way with four apiece. Lanzilli is hitting .325 with 18 RBI. First baseman Bobby Seymour is Wake’s leading hitter at .347 with a team-high 22 RBI. RHP Colin Peluse occupies the Friday night role in the Deacon rotation. He is 1-1 with a 3.13 ERA and 18 strikeouts in 23 innings across four starts.

Wake Forest leads the all-time series with Boston College, 22-17; with all 39 games played a regular season, ACC opponents. The No. 25 Demon Deacons won the first-ever match-up, 5-0, in Winston-Salem on March 17, 2006, as part of a series sweep. The Eagles returned the favor by sweeping Wake at Shea Field a year later.

BC was swept by Wake Forest at home in 2018 by scores of 3-0, 2-0 and 6-1. The first two games came in a Friday doubleheader at the Harrington Athletics Village. Dan Metzdorf pitched seven innings of two-run ball with nine strikeouts in the nightcap, while Morgan McSweeney went six-shutout with 11 Ks for the visitors.

BY THE NUMBERS: THE EAGLES VS. WF

Chris Galland went 3-for-10 with three stolen bases and a walk last season… Gian Martellini is a career .261 (6-for-23) hitter vs. Wake with two doubles… Dan Metzdorf has two starts of six innings or more with a 1.38 ERA and 14 strikeouts in 13 innings of work… Zach Stromberg has made five relief appearances against the Demon Deacons; totaling six innings with nine strikeouts and four scoreless appearances.

The Eagles visit Northeastern on Tuesday, March 19 before a four-game stretch to end the week vs. Siena and Clemson.