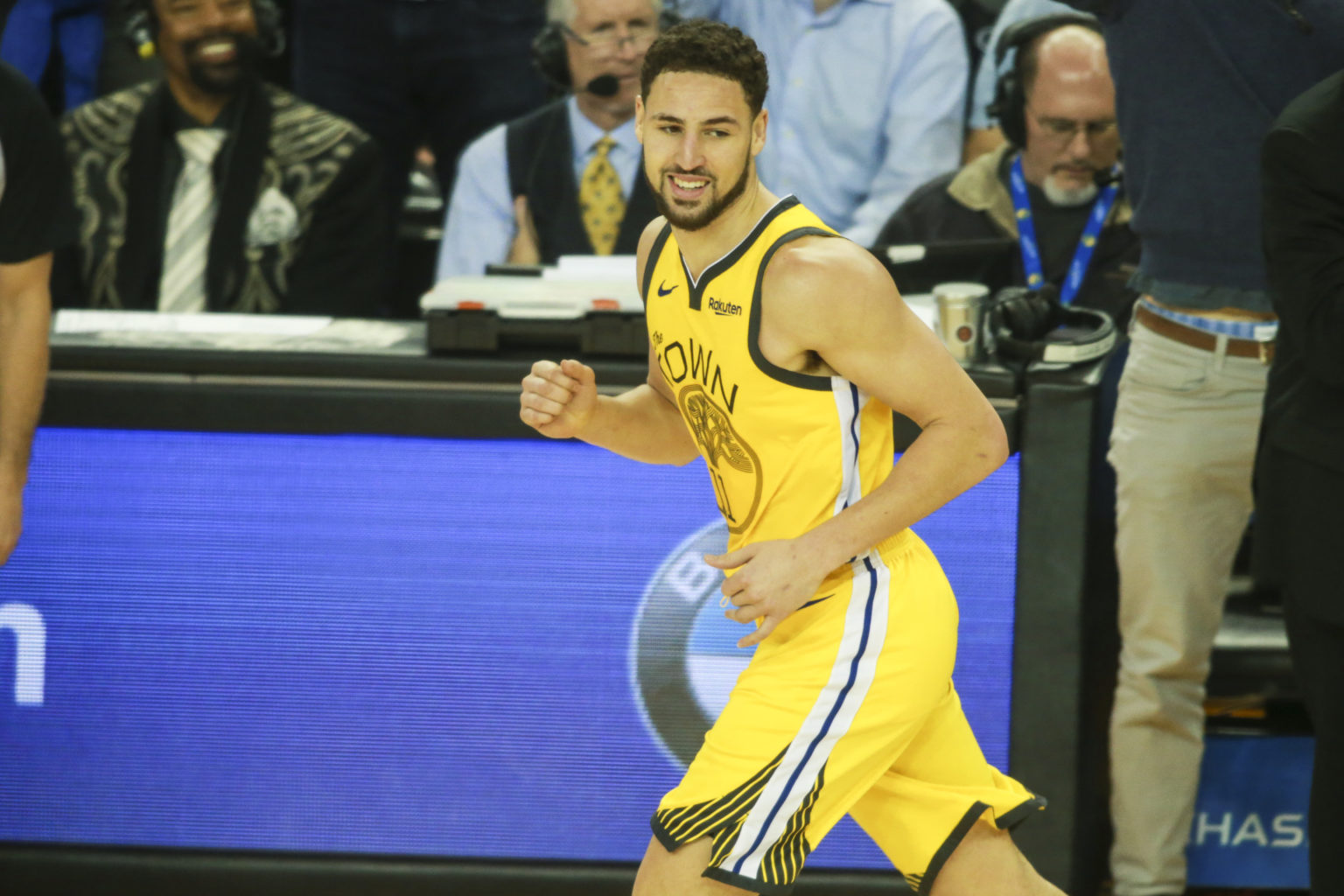 Can the Golden State Warriors be beat if Klay “Mayday” Thompson is firing on all cylinders? Uh, no. Second in line behind Stephen Curry as one of the Splash Brothers, Klay is first in line when it comes to whether or not the Warriors win or lose. Simple as that.

Don’t get me wrong. Golden State can take down anyone with Thompson either out of the lineup due to injury, or if he’s having one of those off nights. However, the catalyst that fuels the Warriors unbeatable moxie is Klay.

Other than being the second Splash Brother, Mr. Thompson has never been given a nickname. Well, that ends today. I’m knighting him Mayday, folks. If Klay’s on his game, the other Orange Roundball League team the Warriors are playing may as well shout ‘Mayday’ as loud as possible. This isn’t rocket science. When Thompson is filling up the cup from the land of plenty, you’re in trouble. Period. End of story, my friends.

In my opinion, Klay is the best pure shooter in the NBA today. Even though his career isn’t over by a long shot, I must rank him up there with Hall of Famer’s Reggie Miller and Ray Allen as the best sniper of all-time. The 29-year-old from Los Angeles was drafted No. 11-overall in the 2011 NBA draft out of Washington State.

Thompson’s 6-foot-7 and 215-pound frame make things even more difficult for defenders guarding this superstar. The ridiculously quick and high release of the orange from his right fingertips allows him to let it fly without worry of his shot being blocked or deflected. No matter how fast the rock needs to leave his hands, you can rest assured that his form is perfect. Feet square, shoulders square, all square. Money.

Klay Thompson #11 of the Golden State Warriors puts up a three-point shot on his way to a game-high 52 points against the Chicago Bulls at the United Center on October 29, 2018, in Chicago, Illinois. The Warriors defeated the Bulls 149-124. (Photo by Jonathan Daniel/Getty Images)

Earlier in the season, Klay messed around and dropped 52 points in just 26 minutes of action against the Chicago Bulls. Not only were the points compiling, but Thompson was also drilling triples with ease. Honestly, I was a little worried that Klay might burn his shooting hand as that orange was on fire.

Finishing off that night in Chicago with 14 threes, Mr. Thompson broke his all-world teammate, Curry’s, previous NBA-record of 13 triples in a game. Steph set that mark back in 2016.

In a pivotal regular-season game on March 8th at Oracle Arena in Oakland against the current No. 2-seeded Denver Nuggets out West, Klay didn’t disappoint. A grand total of 39 points with nine daggers from the land of plenty did the trick in a 122-105 Warriors’ victory. His gorgeous stroke was finding nothing but bottom, bottom, bottom.

It hasn’t only been a picnic for Klay as of late. He’s now being talked about due to some controversial comments made after a 115-111 loss to the lowly Phoenix Suns within the friendly confines of Oracle Arena. The Suns (16-52) have the league’s second-worst record behind the dreadful New York Knicks (13-55). Ouch, babe. So, you can imagine that nobody in the Golden State locker room was smiling after this one. To make matters worse, Kevin Durant suffered a bad right ankle contusion during the affair with the Suns.

Klay called out Warriors’ fans at Oracle by saying, “I expect our crowd to be little more into it, too. Like, I know it’s not the playoffs, but it is our last go-around at Oracle. Least you can stand up or something when we make a good play, especially in the beginning. We need that energy, especially this time of the year. It’s hard to conjure up energy every single night ’cause you’re looking forward to the playoffs and that run. So we expect our fans to kind of bring that from the jump. … It’s like us, though. You can’t bring it every night, but still, it helps. … It doesn’t matter if we’re playing the Suns or the Bucks, whoever it is. We need that energy from them because we feed off that.”

Calling out your own fans is a bit harsh, but I can’t disagree with Klay. Golden State has won three NBA championships in four years, people. Warriors’ fans shouldn’t need to chug down a Red Bull in order to make Oracle raucously loud every single night. Regardless of the competition or overall team play, stand up and cheer, Dub Nation.

To dispel any further controversy, Klay even took to Twitter on Wednesday in order to tweet an apology to Warrior fans.

I love DubNation. We have the greatest fan base in sports. We feed greatly off their energy in Oracle and I meant no disrespect. #timetogotowork #roadwarriors

Whatever your take on Thompson’s comments directed towards Golden State fans, if Klay is on his game and knocking down shots, the remaining 29 teams in the NBA have zero chance of beating these Warriors. They’ll be shouting “mayday, mayday, mayday” because they’ll be in trouble, trouble, trouble.