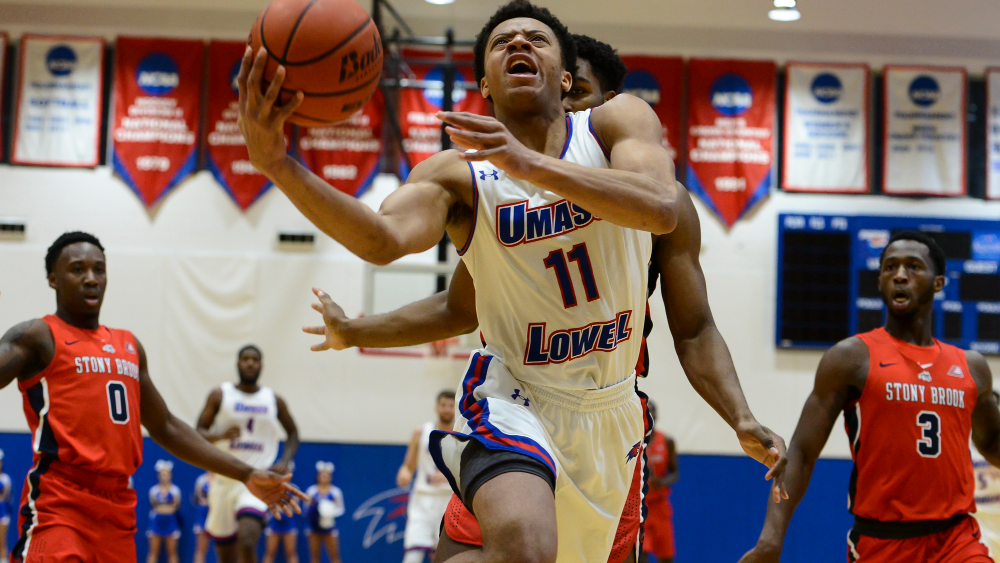 Gantz scored on back-to-back possessions and senior Ryan Jones (Rio Rancho, N.M.) knocked down a three from the far corner to help the River Hawks jump out to an early lead in the opening minutes of the contest, but a 9-2 spurt by the Wildcats gave the home squad a 17-13 advantage with 12:14 remaining in the first half.

UNH maintained at least a two-point margin until UMass Lowell mounted a 10-2 run that was capped off by a triple from Lutete to pull ahead, 27-23, at 5:07. The Wildcats were able to tally the next four points and even the board, but free throws from freshman Bryce Daley (Pittsfield, Mass.) and Noel in the waning minutes gave the visitors a slight, 31-30 edge at the break.

New Hampshire registered seven of the first eight points coming out of halftime to regain the upper hand, but Lutete would knot the score at 37-37 following five straight points. The River Hawks fell behind by five during a four-minute scoreless stretch, but Lutete snapped the silence on a fast-break before Gantz pulled up for a triple to force yet another tie, this time at 42-42, with 11:43 to go.

The score was even twice more before Noel and Lutete combined for five points, igniting a 12-2 spurt that put the River Hawks ahead, 64-60, at 1:35. However, UNH hit consecutive threes in the final minute to take the lead for good and then sealed the decision at the foul line to snap an 11-game skid.

The Wildcats now lead the all-time series, 9-2. The River Hawks will play their next two games at home beginning on Saturday, January 12 when UMBC comes to the Tsongas Center for a 5:30 p.m. tilt.