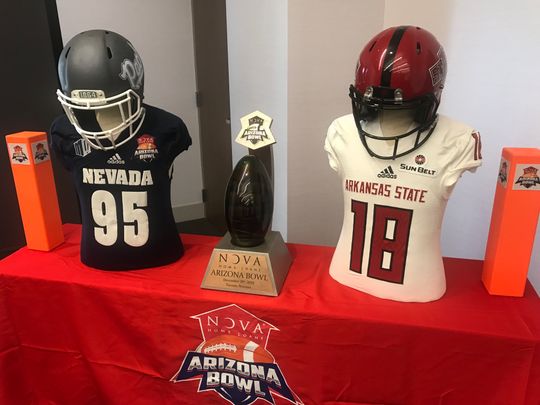 It was a sunny yet cold day in Tucson to start the 2018 Nova Home Loans Arizona Bowl. Only 44-degrees at kickoff, the gorgeous sun, and transparent clear blue skies made things feel a little warmer. Plus, the field turf at Arizona Stadium absorbed the sunlight perfectly, making the cold temperature rise for the players down below.

Would the 2018 version of this bowl game live up to the hype of the 2017 edition? Last year, the New Mexico State Aggies broke a 57-year bowl drought with a 26-20 walk-off win over the Utah State Aggies. Yes, the Aggies versus the Aggies.

This year, how about the Arkansas State Red Wolves (8-4, Sun Belt) and Nevada Wolf Pack (7-5, Mountain West). A matchup of wolves this time. I like it. Very interesting.

After covering TCU’s 10-7 overtime Cheez-It Bowl victory inside of Chase Field in Phoenix, I was hoping for some offense in this one. Unfortunately, it apparently wasn’t in the cards. In fact, the first points of the game were scored by Nevada with 5:09 left on the first half clock. Finally. You have to go all the way back to the 2008 Sun Bowl to find a bowl game that was scoreless longer. Wow. With just a field goal, the Wolf Pack took a 3-0 edge.

Amazingly, a few minutes later had Arkansas State finding pay-dirt. Red Wolves’ running back Marcel Murray scooted two-yards to the heezy, giving his squad a 7-3 advantage with 3:08 left in the opening half.

Mr. Murray had plenty of help in the backfield with the little guy — 5-foot-5 and 184 pounds, Warren Wand. Shifty and dynamic, Mr. Wand broke some Wolf Pack ankles on a couple of his pigskin totes. Wand ended his day with 16 touches for 140 yards.

Through the air for the Red Wolves, senior quarterback Justice Hansen showed that he can sling it. With a high release side-arm delivery, Mr. Hansen is generally extremely accurate leading wide receivers like Omar Bayless and Kirk Merritt down the field. On Saturday in Tucson, we did see a lot of that from Hansen. Justice finished his day with 275 yards on 26 completions. Bayless was the ultimate beneficiary, hauling in seven receptions for 129 yards.

However, several of Hansen’s inaccurate throws found the hands of Nevada defenders. Three interceptions, including two while going in for scores inside Nevada’s 10-yard-line. An additional turnover on downs in a goal-to-go situation didn’t help matters much. Factor that in with kicker Blake Grupe missing his first three field goals and Arkansas State had some big-time issues even with 499 total yards of offense.

On the other side of the pigskin, Nevada senior quarterback Ty Gangi completed 18 passes for 200 yards. Mr. Gangi didn’t fare much better in the turnover department, throwing two INTs in the game. I didn’t witness nine interceptions like I did in the Cheez-it Bowl, but five total INTs in the Arizona Bowl without a single turnover coming from a fumble recovery punched me right in the gut. I’ll call the Cheez-It the INT-1 Bowl, and the Arizona will get pegged the INT-2 Bowl. Goodness, gracious.

The Wolf Pack could muster just 285 yards of total offense, but they were never out of the game due to a bevy of Red Wolves’ mistakes. Enter 5-foot-9 and 180-pound junior wide receiver Ben Putman. Mr. Putman snared four passes for 114 yards. Most notably was his 44-yard reception with a mere 1:15 left on the fourth quarter clock. Putman would’ve scored on the play, but he tripped over his own legs on the way to the house and fell short at the one-yard-line. Nevada found the end zone on their next play with a rushing TD.

All of a sudden, Nevada had a 10-7 lead with just over 60-ticks remaining. I failed to mention that each team was injury-laden throughout. A football MASH unit, so to speak. Nevertheless, Arkansas State still had time remaining to either tie or take the lead late.

Clutch throws by Hansen along with fantastic catches by Red Wolves’ wideouts gave Arkansas State a fighting chance. It would be up to Grupe’s foot to make a field goal and tie things at 10 apiece. Remember, he missed his first three attempts.

It didn’t matter this time — Grupe tied the game with a beautifully perfect 32-yard FG on the final play of regulation. So, tied at 10-10, how about another overtime bowl game? It keeps happening.

On Arkansas State’s initial possession of OT, Mr. Grupe nailed another FG. This time it was of the 24-yard variety. Now with a 13-10 edge in overtime, it was Nevada’s turn to touch the football from the 25-yard-line going in.

After a few good bulldozing runs by Wolf Pack running back Toa Taua, Nevada took to the air. Gangi found Reagan Roberson on a catch-and-run of 11-yards. Mr. Roberson had reservations for six after completely dismantling an Arkansas State defender on his way to the goal-line. That’s it. Nevada had won the 2018 Arizona Bowl in style, 16-13 in OT.

The loss dropped the Red Wolves to 8-5 and subsequently bulged Nevada’s record to 8-5. A Wolf Pack squad that only won three games last season. Congrats to the Nevada Wolf Pack on their Arizona Bowl victory. 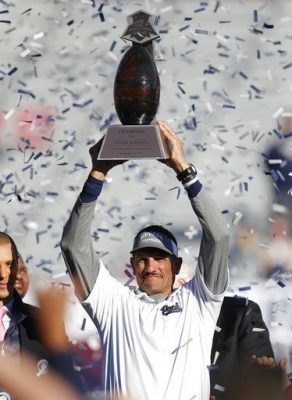