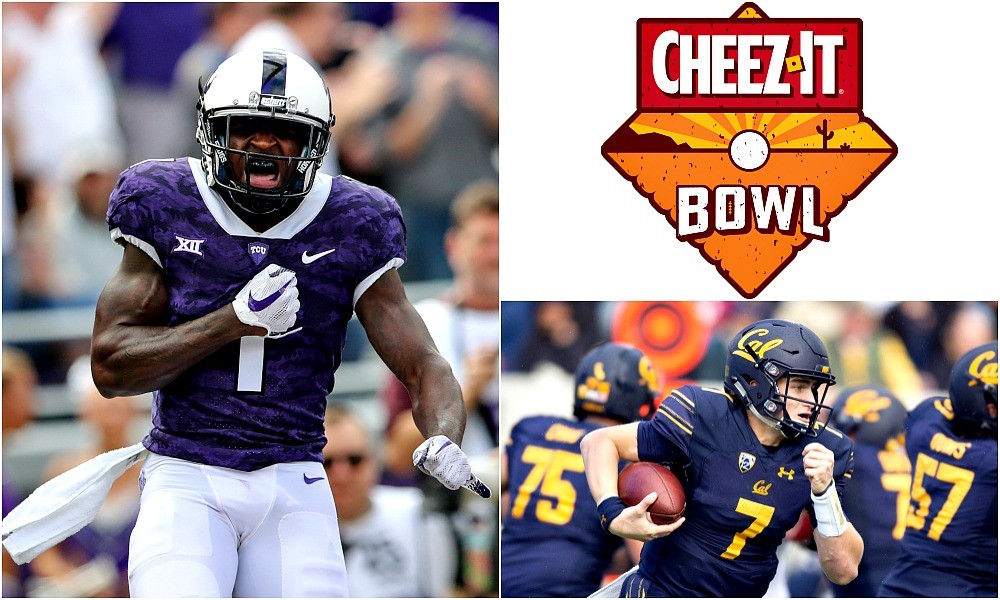 The 30th Annual Cheez-It Bowl at Chase Field in Phoenix, Arizona started with excitement. It certainly wasn’t from the players on the field. Ouch. Dreadful performances by both the California Golden Bears (7-5, Pac-12) and Texas Christian University Horned Frogs (6-6, Big 12) offensively. We’ll just say that it was a defensive battle.

Earlier in the day on Wednesday, December 26th, the Servpro First Responder Bowl was canceled due to severe weather (lightning) at the Cotton Bowl in Dallas, Texas. Unfortunately, the beloved CEO of NGSC Sports and my good friend, Ralph Garcia, was there covering the affair. He drove four hours from Houston to Dallas to no avail. I spoke with him just before the start of my adventure at the Cheez-It Bowl, and he had just finished his four-hour drive back to Houston. We salute you, Mr. Garcia. You see, at NGSC Sports… We Never Stop!

As for the aforementioned excitement that ignited the contest. Well, that was conjured up by the Cal and TCU bands during pregame. Add some extraordinary parachuting human beings landing on the middle of the field along with a field-sized American flag during the National Anthem, and there’s the energy I’m referencing.

I did have one heck of a view from just above the first level at Chase Field – home of the Arizona Diamondbacks. A baseball diamond turned into a football field. I must say that it was very well done. Cal Blue and Gold lighting up one end zone, and TCU Purple and White illuminating the other. Plus, the pretty Cheez-It Bowl logo at the 50-yard-line.

Freshman quarterback Chase Garbers opened the scoring in the first quarter with a four-yard dash to the heezy for six. After the subsequent extra point, Cal was in control 7-0 deep into the second half of action.

For TCU, thank goodness for running back Sewo Olonilua. Dude play possessed, toting the pigskin for 194 yards and a touchdown on 32 carries. Mr. Olonilua tied the game at 7 apiece with just 3-ticks remaining in the third quarter. Owning the line of scrimmage with physical, downhill running between the tackles, Sewo won offensive MVP honors.

Before Olonilua’s score, wide receiver and punt returner Jalen Reagor made the biggest play of the contest. A 58-yard punt return with the Horned Frogs pinned deep in their own territory. Just another example of how great special teams play can lead to overall confidence. Seven plays and 33 yards later, TCU had knotted things up.

As the last few minutes of regulation came to an end, it seemed inevitable that this bowl game was headed for overtime. A last-second field goal from the Horned Frogs sailed wide-left to make it official. In Cal’s first possession of OT, Jawuan Johnson added a bowl-record ninth INT to the tally. Nine turnovers in the game, ladies, and gentlemen — all INTs. With a little crease, Mr. Johnson almost ended it with a walk-off, pick-six. He was eventually strung down at the 10-yard-line.

A sideline warning during Jawaun’s return backed TCU up to the 40-yard-line to start their initial OT drive. Fittingly, they went rush heavy right down Broadway to place themselves in position for a winning field goal. Jonathan Song’s 27-yard FG finished things off. A 10-7 victory to propel the Horned Frogs to 7-6 while dropping Cal to 7-6.

I can sum this game up with one moment during TCU’s postgame celebration as victors of the Cheez-It Bowl. A glimpse at a Horned Frog player at the 5-yard-line closest to my gorgeous view. He tried to spike the TCU flag into the turf. The flagpole bounced off the turf and never stuck folks. Embarrassing.

After hoisting the Cheez-It Bowl Trophy high above his noggin, Head Coach Gary Patterson emphasized that his guys had fought their tails off. An ugly looking 4-6 mark turned into a 7-6 season with a big bowl win. Congrats, Coach Patterson and the TCU Horned Frogs.

Goodnight from Chase Field in Phoenix. Next stop — the Arizona Bowl in Tucson.