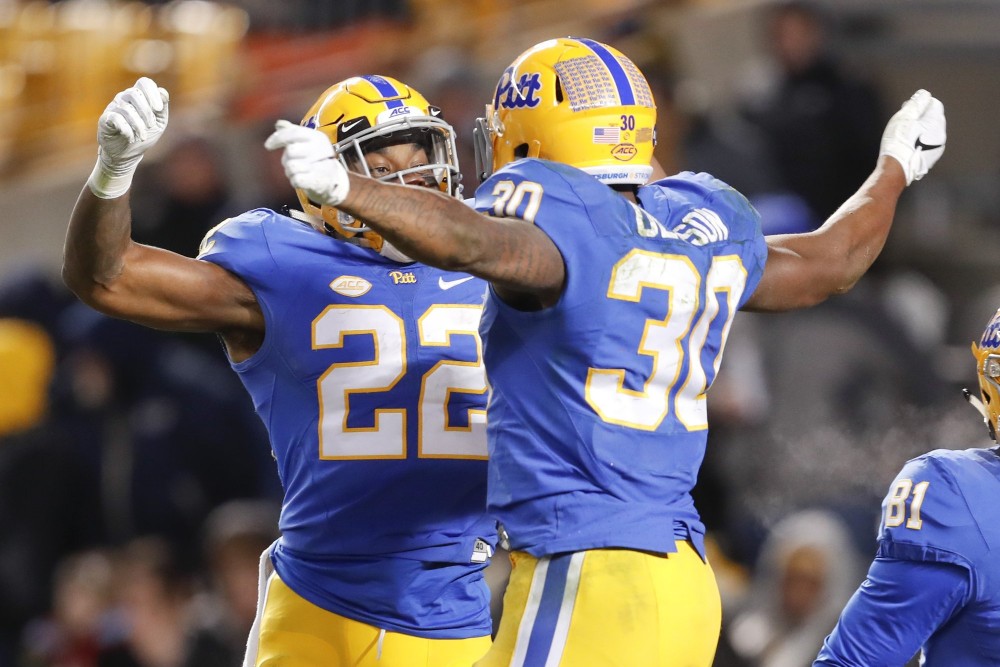 Welcome to the most comprehensive Pitt Panthers Game Day Preview on the internet! This is your one-stop shop for everything you need to know about Pitt and their upcoming opponent! Mike Drakulich of Pittsburgh SportsNation brings you inside the huddle for both teams, providing all fans with a Game Preview, Pitt’s Keys to Victory, Score Prediction, a detailed breakdown of each team, Game Information, Individual Stats, and Team Stats. Heck, you’ll even know the weather at kickoff! The only thing you’re missing is a game uniform!

The last two offensive efforts by the Pitt Panthers haven’t exactly been memorable, especially the last game in the ACC Championship vs Clemson.

“We just did not play our best that game,” Pitt offensive coordinator Shawn Watson said Thursday at a news conference to preview the Sun Bowl. “The thing we’ve got to do is — I’ve got a great group of guys. They are really prideful people, and they want to get that taste out of their mouth and get back to business with how they see themselves, how they see us playing.”

One thing is for sure… Stanford is NOT Clemson or Miami when it comes to defensive prowess. So when Pitt (7-6) takes on the Stanford Cardinal (8-4) on New Years Eve at the Sun Bowl in El Paso, Texas, some dignity will be on the line for an offense that was humming prior to the back-to-back debacles to end the season.

“For our guys, for all of us — coaches, too — it’s a matter of pride,” Watson said. “We were rolling and doing really well, and we want to get back to being us. And that’s just us getting back to the fundamentals of the game and going back to work, and we’ve been able to do that during our prep time. It’s been good to get that behind us and now we’ve got to go prove it.”

Starting QB Kenny Pickett hasn’t progressed as many hoped in his first year as starter. Pickett only threw for 1,833 yards in 13 games, with 12 touchdowns and six interceptions. He was sacked 30 times. He was downright awful vs Clemson, with a laughable eight yards passing.

“That’s a place that we’ve got to continue to grow at, and that’s a process,” Watson said of the passing game. “It’s always the biggest part of the process, especially with young receivers, a young quarterback, and we’re making our way through that.”

Hopefully, since Pitt left the field in Charlotte, both Pickett and the coaches have figured out a way to complete a few forward passes and not mimic an offense that Pitt may have resembled in the previous encounter between these two teams, that being in 1932 when Pitt beat Stanford 7-0.

“You always can, because you’ve got time,” Watson said about getting Pickett to improve, especially with the extra practices the team has had thanks to the Bowl game.. “You’ve got time, so you’ve always got a chance to add to yourself or put new things in that come off of what you do. You really try to self-scout yourself and try to move forward with some things that look similar, but they’re really not, they’re different.

“When you come in August, you make a commitment to the team for the rest of the year,” Ollison said Thursday after practice. “I’d like to stand on that commitment, no matter if I was projected a first-round pick or projected undrafted, it doesn’t really matter.”

Stanford also won’t have offensive lineman Nate Herbig, who will bypass the game as a junior entering the NFL draft a year early.

No Panthers, at least to Pitt head coach Pat Narduzzi’s knowledge plan to skip the game.

“I sure hope not,” he said with a smile.

Paris Ford is not with the team in El Paso as of right now, but he is expected to make the trip. He has been home due to personal reasons.

“We’ve actually got Paris working some safety right now, so that’s maybe a position change, but really not far from what our thoughts were with him,” Narduzzi said of Ford, who has barely played this season at cornerback. “Playing corner for as long as he has has helped him understand what he has to do at safety. He’s learning it, he’s been making some plays at safety, so we’ll see. We’ll see how close he gets and see what the practice tape looks like.”

Junior safety Damar Hamlin would certainly like to see Ford alongside him for the 2019 season.

“I feel like Paris always can be a factor, and could’ve been a factor [this season],” Hamlin said. “He’s a safety. That’s what he is. … He just looks comfortable back there. He’s ready to go when his number’s called.”

It’s a big game for the younger players, but also for the seniors, who will be making their final appearances as Panthers. It’ll be one final dance under the fading sun in Texas this Monday.

“I’ve never been to Texas before,” Hall said. “They say everything’s bigger in Texas, so we’ll see how that is.”

Hopefully, this game will be much more exciting than Pitt’s previous visit to the Sun Bowl in which they lost to Oregon State 3-0.

Pitt definitely has the horses to quiet the critics and take down Stanford in this game. Look for Pitt to come at Stanford with the one-two punch of Qadree Ollison and Darren Hall, as well as appearances by V’Lique Carter and Maurice Ffrench in the running game. The trick is to not be predictable. Kenny Pickett will have to manage more than eight yards passing as well.

“That’ll sting me,” Pickett said of his last game, then smiled, “until next year when we’re back there. That’ll always be stinging me.”

Pitt head coach Pat Naduzzi is still a believer in his young quarterback.

“He’s the leader on offense. If you talk to a lot of people back in Pittsburgh, they’re saying he didn’t do so well,” Narduzzi said. “I’ve been impressed with what he’s done. He’s still a baby. He’s still learning. He’s very conservative with what he does, because he’s so locked in to making sure he helps the football team. He doesn’t take many shots, he doesn’t take risks, and he took a couple in that Clemson game that really hurt us, especially before the half. We like his conservative play, and he plays within the offense.”

The team has had 30 days to address the problems in the passing game and the void left by center Jimmy Morissey being injured. Stanford’s best player in Bryce Love will be watching the game from the sidelines as he has decided to skip the game to prep for the NFL Draft.

Pitt will have to contend with Stanford’s K.J. Costello who will pick you apart if given enough time. J.J. Arcega-Whiteside is Costello’s favorite target, so it would behoove Pitt to focus on keeping him in check as best they can.

Count corner Jason Pinnock as up to the challenge.

“He’s tough. He’s a guy who runs great routes, I think. He’ll swipe you by him, he loves ‘stutter-and-goes’ — he’s a great player,” Narduzzi said of Arcega-Whiteside. “You’ve got to make plays on him.

Stanford’s offensive coordinator Tavita Pritchard is impressed with what he sees from Pitt’s up and coming defense.

“The challenge to playing the Pitt defense, obviously, is that they have a system that they believe in, and they play it extremely well. They play it very hard,” said Pritchard. “They know that system inside and out. I wouldn’t even say its what they’ve done against certain guys, necessarily, but just in how they play, generally. The two corners outside are phenomenal players. They really do a good job of coming down and challenging you.”

Look for a close game that ends with Pitt grinding out a tough, well earned victory, ending the season on a high note, and setting up high hopes for the 2019 season.

Kenny Pickett played in four games last year, making one start as a true freshman. Gifted with a strong arm and the ability to run with the ball if no receivers are open. Jeff George has risen to the #2 spot.

Darrin Hall and Qadree Ollison give the Panthers a pair of 1,000 yard rushers. Consider Hall lightning to Ollison’s thunder. George Aston is back at fullback after missing most of 2017. Aston was a beast in 2016 finishing third on the team in scoring (tied) with 60 points on 10 touchdowns (five rushing and five receiving). A.J. Davis was expected to see time this year, but it looks as if 2019 will be his time to shine. V’lique Carter was unleashed against Duke and ran for 137 yards and two touchdowns on just seven carries, an incredible average of 19.6 per rush!

Pitt is deep at WR, with senior Rafael-Araujo Lopes, juniors Tre Tipton, Maurice Ffrench, and Aaron Mathews, freshman Shocky Jacques-Louis, and Indiana sophomore transfer Taysir Mack. Araujo Lopes, Ffrench, and Mack are the top trio for Pickett. Mathews may not see many passes, but he is an absolute beast blocking downfield in the rushing attack.

At tight end, sophomore Tyler Sear transferred out, leaving the job to Arkansas transfer Will Gragg and Grant Carrigan. Jim Medure is also in the mix.

Senior Shane Roy was a starter at nose tackle last year, Amir Watts and redshirt sophomore Keyshon Camp to see time as well. Jaylen Twyman, has been pushing the whole group as a redshirt freshman.

At LB, Oluwaseun Idowu is the starting outside “star” linebacker. Quintin Wirginis was the starter in the middle till he was injured at mid season at practice. Elias Reynolds and Chase Pine are rotating in Wirginis’ absence. Redshirt senior Elijah Zeise and redshirt junior Saleem Brightwell battling for the “money” spot.

Redshirt junior Dane Jackson started all 12 games last year and will assume the same duties as a starting cornerback in 2018. Redshirt senior Phillipie Motley, sophomores Damarri Mathis and Jason Pinnock are all battling for that 2nd spot.

Alex Kessman took over Pitt’s starting placekicking duties in his first active season…converted 11-of-19 field goals (58%) and 34-of-34 PATs (100%) for a team-high 67 points. This year, he’s has nailed four field goals from beyond 50 yards, including a Heinz Field record 55 yarder.

Maurice Ffrench and Rafael Araujo-Lopes will provide the return duties for the Panthers. Ffrench has already returned two kicks to the house in 2018.

A look at the Stanford Cardinal!

K.J. Costello is having an excellent season with 3,435 yards passing with 29 TD’s and 11 interceptions. He has been sacked 20 times.

Bryce Love will skip the game to focus on the NFL Draft, so Cameron Scarlett and Trevor Speights will assume the role to replace Love.

J.J. Arcega-Whiteside leads the team with 60 receptions, good for 969 yards and 14 touchdowns. Trenton Irwin is co-leader with 60 catches as well, but for only 685 yards and two scores. Michael Wilson, Osiris St. Brown, Connor Wedington are Stanford’s other options at receiver, but have combined for just 29 receptions between them.

Kaden Smith has 47 receptions for 635 yards and a pair of touchdowns.

Stanford gives up 23.8 points per game and allows an average of 415.6 yards to opposing teams. Stanford allows 140.9 yards on the ground, and can be had through the air, giving up 274.7 yards per contest.