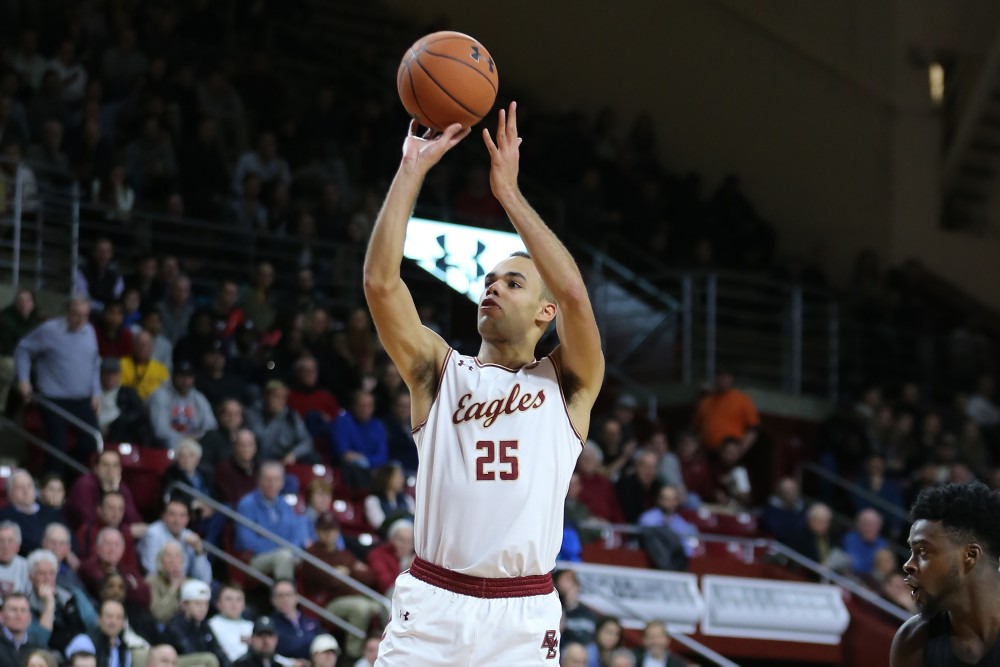 Two old Big East rivals got together on the hardwood Tuesday night. Boston College (6-2)  welcomed Providence College (7-2) to Conte Forum. Both programs were charter members of the Big East Conference back in 1979 and for the past twelve years, they have been playing a home and home series.

This series has been dominated by the home team with Boston College winning the last five matchups at home. If the Eagles were to make it six in a row, they would have to do it without one of their key performer’s as big man Nic Popovic would sit this one out with an injury.

Early in the first half, it was about the guards. David Duke was ripping five of Providence first twelve points while for Boston College, it was the backcourt duo of Wynston Tabb (17) with four and Jordan Chatman (game-high 28) with five. The Friars led 12-9 five minutes in.

The Eagles got into some foul trouble when Ky Bowman (17 points) picked up his second foul with 12:47 to go. It forced Coach Jim Christian to insert freshman Chris Herren into the lineup.

A seven to three Providence run finished off by a Jimmy Nichols high flying dunk, put the Friars up by eight at 24-16. It forced an Eagles timeout.

Providence would increase the lead to double-figures on an Isaiah Jackson (12 points ) three ball. It was 33-22. Boston College came back on a fourteen nothing run to wipe out the deficit and gave BC a four-point lead at 37-33. Herren had two big three-point bombs in the run.

The Eagles would take the lead with them to the locker room at 43-39.

The second half began with Boston College going deep. A three-ball from Chatman after a made field goal got the Eagles off to a good start. It would force Coach Ed Cooley to call a timeout four minutes into the half.

Providence marched right back with a five nothing burst punctuated by a Nate Watson (19) dunk to put the Friars back in the lead at 57-55 with 15:40 left. A Wynston Tab dunk off an out of bounds play gave BC the lead again at 61-59 and when Tabb and Chatman hit back-to-back three-pointers, BC was up by four at 67-63.

Five straight points from A.J. Peeves put Providence back in front at 73-72 and the see-saw was on. With less than a minute to go, Maliek White hit a wild bank shot and one to tie the game once again at 84-84. Boston College knocked down free throws in the final seconds to seemly put the game in the win column. It was 87-84 with eleven ticks remaining.

But on Providence’s final possession of regulation, Reeves (team-high 24 points) hit a game-tying three-point shot to send the game to overtime at 87 all.

In the overtime, the game would be tied twice more. The last time on a driving layup by Chatman 93-93 with a minute and a half to go.

In that period of time, the Friars went on a closing run of seven to two to win the ballgame 100-95 and give Coach Cooley his first win at Conte as the Friars head man.

Boston College hits the road for a Saturday night game at Texas A&M.