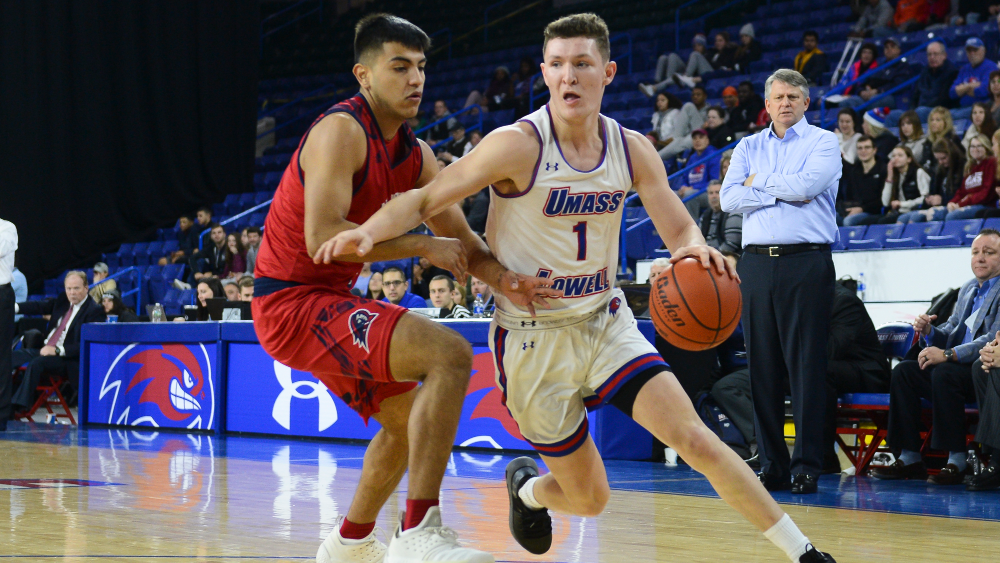 “We got beat by a better team tonight,” said Head Coach Pat Duquette. “They were physical and tough and defended us better than anybody we’ve played all year. The good thing for me was I thought our first-half defense was the best it’s been, but outside of that, we got rushed by their defense. We weren’t able to generate open shots.”

The River Hawks won the opening tip and put the pressure on right from the start, jumping out to a 10-2 lead with the help of four from Noel. The River Hawks maintained at least a one-possession margin until the Terriers used seven straight points to take their first lead at 20-18 with 6:52 remaining in the first half.

Freshman Joey Glynn (Portsmouth, N.H.) banked in a layup to knot the score at 20-20, but a three from BU’s Tyler Scanlon put the home squad back on top. Lutete would drive to the hoop to make it a one-point game before the Terriers put together a quick, 9-3 spurt to take a 32-25 lead, at 1:37. UMass Lowell battled back in the waning minutes of the half though, as Lutete knocked down a layup and a triple on back-to-back possessions and Daley converted on a pair of free throws in the final second to cut the difference to just 34-32 at the break.

Lutete and Noel combined for the River Hawks’ first three baskets coming out of halftime to keep their squad within two. However, the Terriers would extend their margin to double-digits with a 14-4 run to lead, 54-42, with 10:33 left to play.

The teams traded baskets and UMass Lowell cut the deficit to 10 on three occasions, including at 58-48 following a layup from redshirt-senior Josh Gantz (Grove City, Ohio) and a pair of free throws by Daley with 8:56 to go. The visitors were unable to come any closer, though, as BU stretched its lead as far as 23 inside of the final three minutes before sealing the 79-60 outcome.

The Terriers now lead the all-time series between the two squads, 4-3. The River Hawks head back home to finish the week against Maine Fort Kent on Friday, December 7 at 7 p.m.