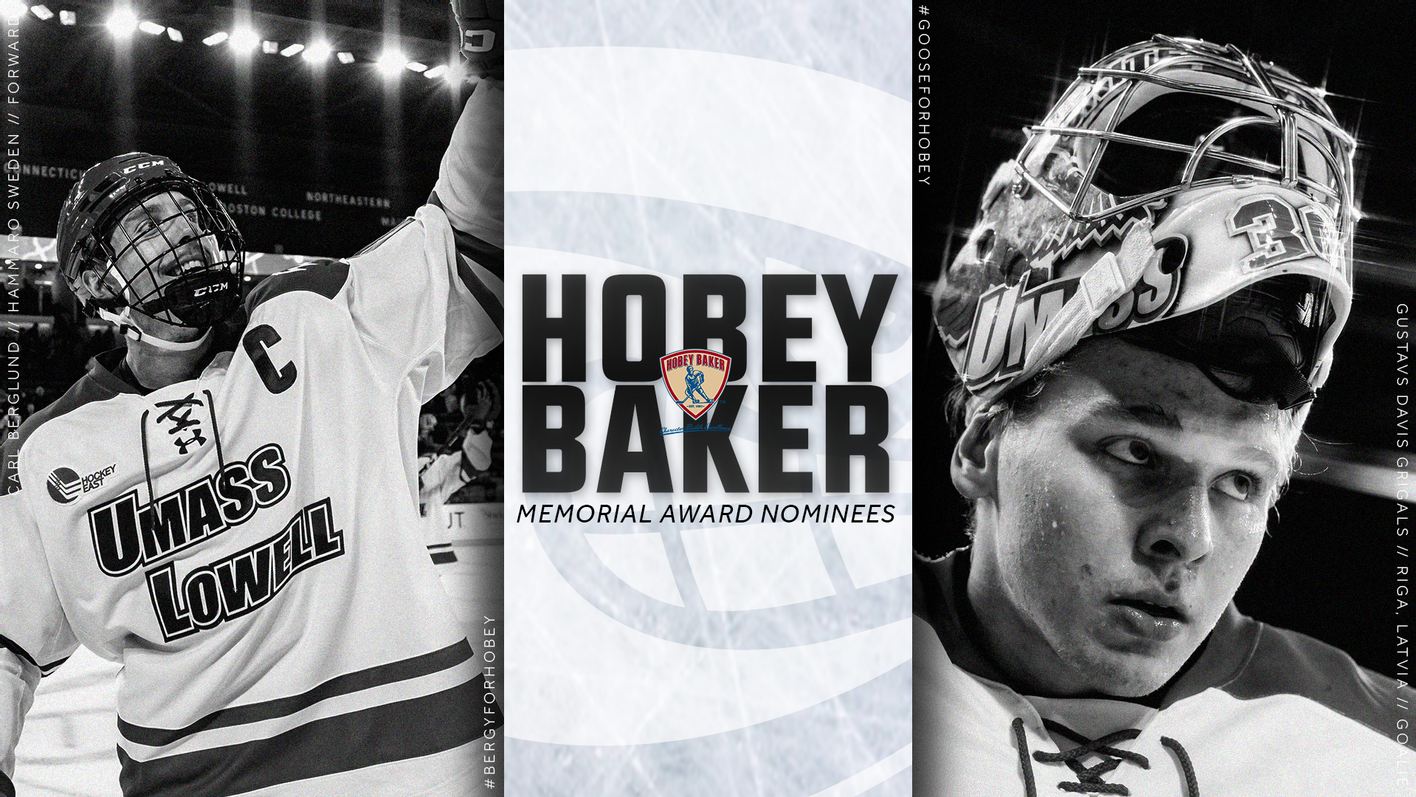 In college football you have the Heisman Trophy, in college baseball, it’s the Golden Spike award, and in basketball, it’s the Naismith award. In college hockey, it’s called the Hobey Baker award. It is handed out at the Frozen Four which this year will be held in Tampa, Florida April 6-8. The award presentation is part of a luncheon that is held on Friday, April 7. Last week, college hockey announced the 80 nominees for this year’s award. The UMass Lowell River Hawks have two players that have made the first cut in this process. They are left-wing and co-captain senior Carl Berglund and graduate senior goalie Gustavs Davis Grigals.

To be selected for this list, four criteria must be met. First, there is the strength of character both on and off the ice. Second is contributions to the integrity of the team as well as outstanding skills in all phases of the game. The third is scholastic achievement and sportsmanship. The last is compliance with all NCAA rules, including being a full-time student and completing 50% or more of the season. Coaches as well as fans get to vote on the top 10 candidates that will be announced at a later date. As mentioned, the River Hawks have two players that are a part of this list. Let’s take a look at their resumes.

Carl Berglund has appeared in 24 games for the River Hawks this season. He has eight goals and 12 assists for 20 points With ten games left in the regular season, Berglund has a chance to match his career single-season points total. He needs eight to tie it, and nine to set a new mark. Two weekends ago in Maine, the senior forward helped his team to gain a split of a series vs the Black Bears by handing out three assists in the two-game series. In his last six games, Berglund has six points. For the season to date, he has a +5 rating with one game-winning goal. Has taken only four penalties in 24 games played. Has had at least one shot on goal in every game played this season. In 14 Hockey East games, Berglund has two goals and five assists for seven points

Before coming to UMass Lowell, Gustavs Davis Grigals spent four years with the University of Alaska Fairbanks Nanooks where he posted a 2.59 GAA and a .912 save percentage in 61 appearances over four years. With the River Hawks this season, Davis has appeared in 14 games, 12 of them starting in goal, and posted a record of 8-5-1 with one shutout which happened back on October 1, 2022. In that home opener vs St. Lawrence, he stopped 27 shots in a 4-0 Lowell win. He has a save percentage of .929% allowing 27 goals in 824 minutes while stopping 351 shots. In Hockey East play, Davis has been in seven games with a record of 3-3-1, with 14 goals allowed in 427 minutes. He has made 203 saves for a save percentage of .935%.

Fans have ten weeks to cast their ballot.