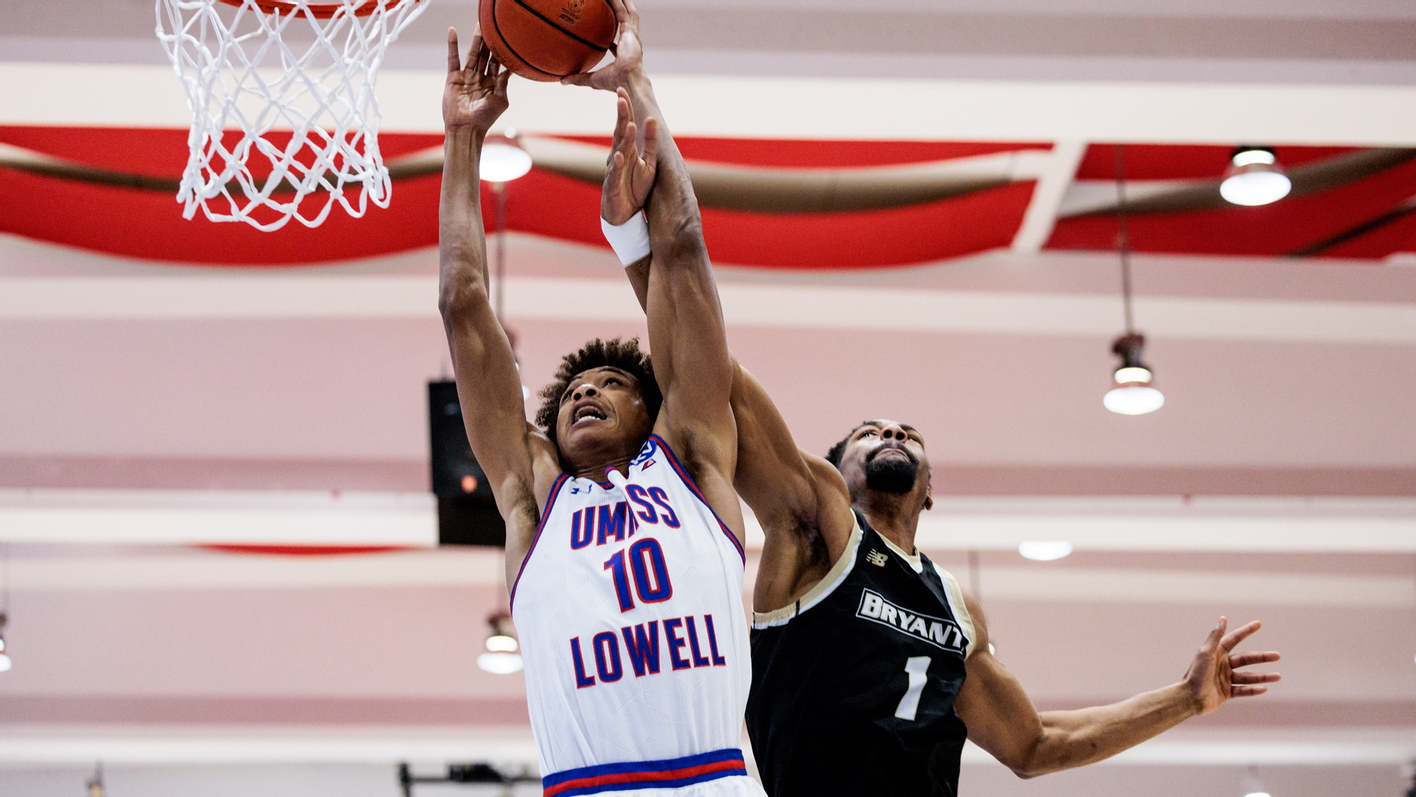 Sunday afternoon the new kids on the block, the Bryant College Bulldogs (13-7, 4-3) made their first-ever appearance as league members at Costello Athletic Center to face the UMass Lowell River Hawks (17-4, 5-2). Before the first ever division one sellout in school history, the River Hawks put on a show that they hope will bring fans back to see them play again. Five players had double-figures led by Abdoul Karim Coulibaly’s double-double of 18 points and 15 rebounds. The double-double is his seventh of the year and second of the week. It is also his twelve double-figure scoring game of the year. Lowell improved to 11-0 at home, one of only three programs in the country that are still unbeaten at home with a 98-79 win over the Bulldogs.

UMass Lowell led this game wire to wire, getting 50 points in the paint for the second game in a row. They had 19 assists on 37 made baskets. Their defense held the conference’s leading scorer Sherif Gross-Bullock to 11 points which is six under his average. The 57 first-half points are a season-high, They shot 51.2% from the field in the first twenty minutes. They held a huge advantage in every category you can have in a basketball game. As coach Duquette said afterward “As good a first half since I have been here.” They started the game on an 11-3 run and never looked back. What kept the Bulldogs close early on was the shooting of Charles Pride (27 points, seven rebounds). His three-point make plus a foul along the left wing had his team within one at 15-14 with 14:49 left in the first half. From there it was all River Hawks.

They went on a 7-0 run to lead by eight at 22-14, Inside baskets by Coulibaly on a second chance lay up by Connor Withers, as well a 3-point basket from Everett Hammond (17 points), had the crowd roaring their approval. They went up by ten for the first time at 26-16 on an Ayinda Hikim (11 points, 6 assists) drive and finished at the rim with 11:56 left in the half. Another Hikim layup pushed the lead to 15 at 31-16 and forced Bulldogs head coach Jared Grasso to call a timeout to slow the River Hawks down. It had little effect. The lead reached twenty at 47-27 on a fast break dunk by Coulibaly who had a double-double in the first half alone of 12 points and 10 rebounds. The advantage would get to 26 points on two occasions. First, on a Yuri Covington three with 1:16 left in the half (55-29), then Mikey Watkins (13 points) took the ball into the lane and lay it in just before the half ended to give his team a 26-point halftime lead of 57-31.

The second half saw UMass Lowell push the lead to 31 on a Hammond three-ball to make it 62-31 with 19:16 left in the game. The lead did dip below twenty twice in the game’s final minutes as garbage time got extended in the second half. Bryant did play a much better second half of basketball outscoring the River Hawks by seven 48-41. But the first-half damage done by the home team was too much to overcome. Junior center Max Brooks finished with 17 for Lowell giving him eleven double figures games on the season. As good of a win as this is for the River Hawks, coach Duquette knows that Bryant is a good team. Saying afterward “they are one of the most talented teams in the league.” The question for the River Hawks now is, how do they take this on the road with them? The team heads out on a two-game road trip to Maine and New Hampshire where they have yet to win on the road in conference play. Mikey Watkins was asked this and his answer was “getting better prepared and practicing better.” We will see how this week goes.