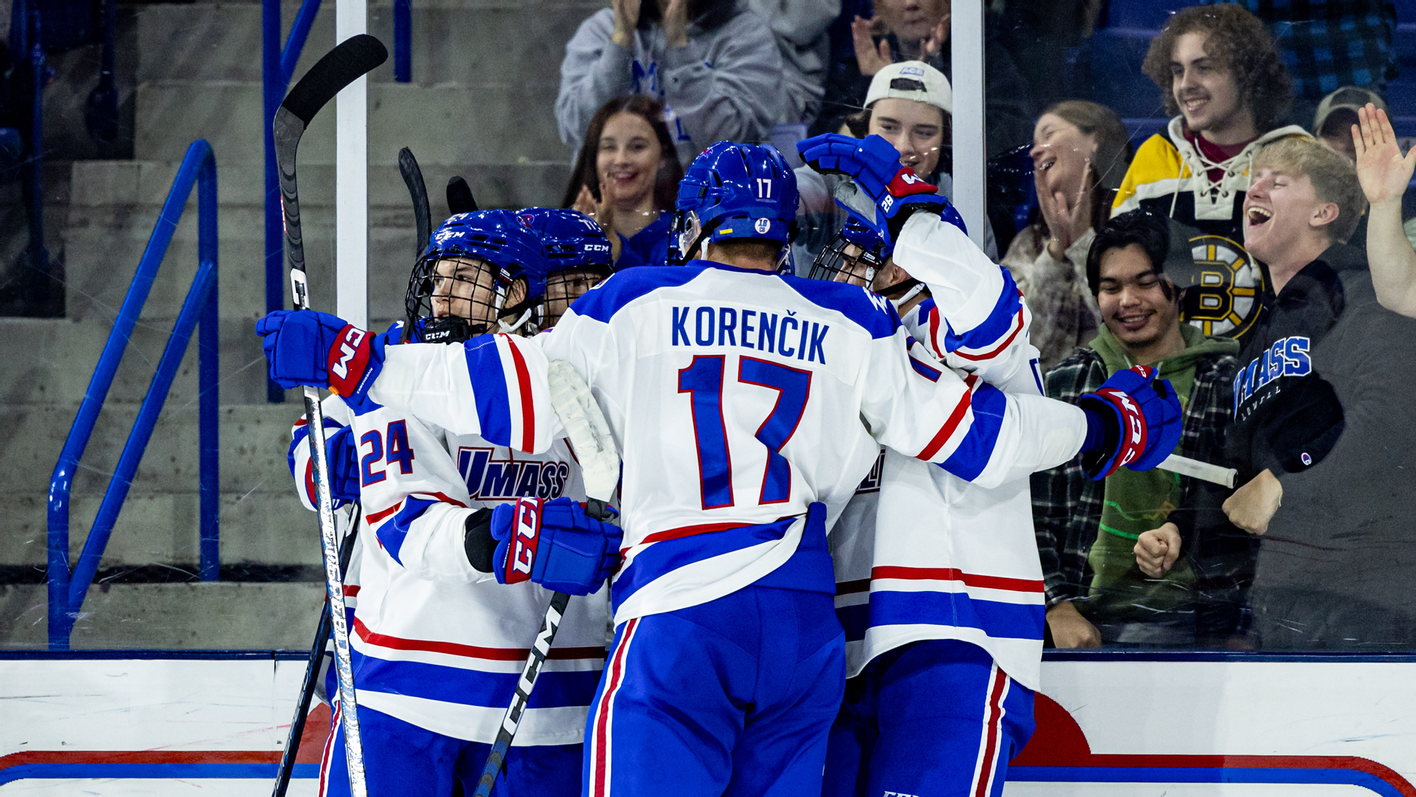 Korenčik’s goal and assist not only gave the defenseman a team-best two points but also marked his first career multi-point game. The Slovakian-born skater also notched a goal in his second consecutive game, setting another career first for him. On top of his impressive offensive performance, Korenčik contributed major minutes on the blue line with two blocks and amassed a +2 rating. Reinforcing the standout defensive outing for UMass Lowell, sophomore Isac Jonsson (Ängelholm, Sweden) tapped in the game-winner for the River Hawks for his third of the season in the second. Co-captains Jon McDonald (Livonia, Mich.) and Carl Berglund (Hammaro, Sweden) as well as senior Ryan Brushett (Montreal, Quebec) also earned points in Orono, dishing out one assist each.

Graduate student Gustavs Davis Grigals (Riga, Latvia) stopped 25 of the 26 shots he faced to improve to a 7-4-1 mark on the year. Most impressively, the veteran netminder backstopped the River Hawks’ penalty kill unit to a flawless performance against the Black Bears.

Though Maine brought several strong net-front challenges to the River Hawks in the early minutes of play, UMass Lowell flipped the switch and lit the lamp first in Friday night’s tilt. Berglund won his battle along the board and found McDonald with a centering pass as the defender advanced through the neutral zone. Korenčik, receiving the drop pass from McDonald, held the puck for a moment before rifling off a smooth wrister past Maine’s Victor Otman for the first of the night.

The Black Bears earned four minutes’ worth of power play time in the closing minutes of the first period, forcing UMass Lowell to defend back-to-back 5-on-4 and 5-on-3 situations. Luckily, impressive goaltending by Grigals as well as impeccable defense by UMass Lowell’s stalwart penalty kill unit squelched both Maine man advantage scenarios to close out the first with the 1-0 margin.

UMass Lowell burst back onto the ice in the second period with intensity, peppering Ostman on the doorstep. Brushett put a firm shot on target after spinning to deflect his defender but was kicked away at the last second by Ostman’s left pad. Sophomore Stefan Owens (Midlothian, Va.) followed up Brushett’s heat check with a hard one-timer to the chest of Ostman, but the puck rebounded up and over the net.

The pressure paid off for the River Hawks just nine minutes into the middle frame. After breaking into the Black Bears’ zone, the home squad tried to shift the momentum back in their favor with a pass along the boards behind Ostman. Korenčik, intercepting the clear attempt, saw an open Brushett in the slot. The senior forward ripped a shot toward the net but misses by a slim margin and the puck bounced off the glass and back into play. Jonsson quickly picked up the puck off the ricochet before ripping a shot through a small gap for a 2-0 lead with 11 minutes to go in the second.

Both teams bumped the physicality as the River Hawks raced for a third and the Black Bears eyed a comeback. Though Grigals picked up 21 stops through the first 40 minutes, Maine’s Nolan Renwick capitalized on a timely screen off a pad save to clip UMass Lowell’s two-goal lead down to one with 18:55 on the game clock.

The River Hawks turned to a more defensive style of play in the final frame. Maine worked to claw their way back into the game with a few taps off the creases, but Grigals knocked down their four third-period chances. The Black Bears pulled Ostman in favor of the extra help on offense as time ticked down, but the efforts came up just short for the home team as UMass Lowell clinched the 2-1 victory.

The River Hawks return to Alfond Arena tomorrow, Saturday, Jan. 13, to close out the series with the Black Bears. Puck drop is set for 7 p.m. on ESPN+.