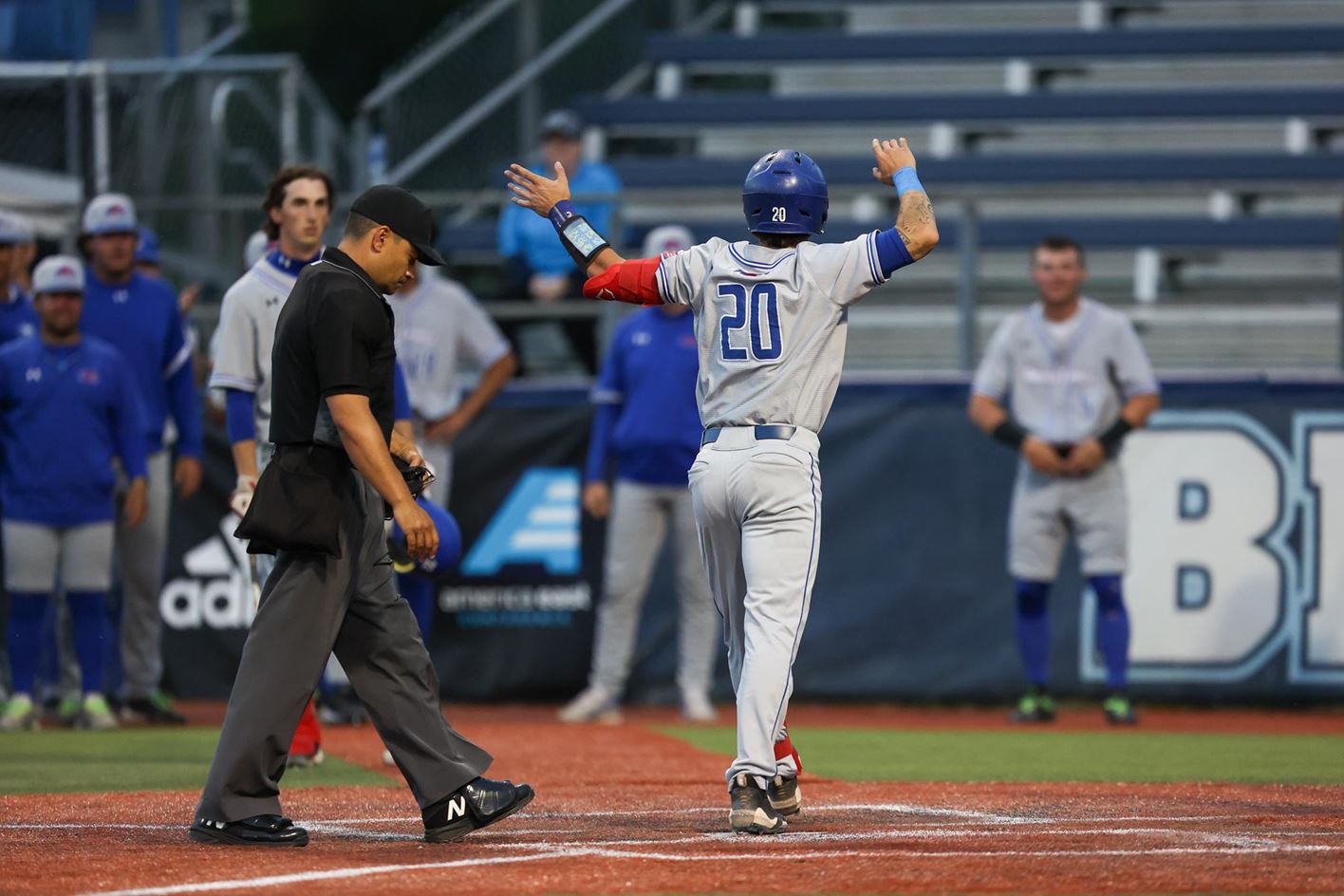 ORONO, ME. – The UMass Lowell baseball team (28-29, 15-15 AE) took down the NJIT Highlanders 13-8 on Friday night to advance to the program’s first America East Championship game. The River Hawks will take on the #2 Binghamton Bearcats at 1:00 p.m. on Saturday, May 28 at Mahaney Diamond.

“It was a really gritty performance from [Michael] Quigley giving us six innings. The offense was relentless, and we knew we were going to have to score a lot tonight,” said head coach Ken Harring. “My hat goes off to NJIT, they’re a bunch of warriors. Now, we have an opportunity tomorrow to achieve a goal that we set at the beginning of the year. One game at a time.”

Sophomore Michael Quigley (Halifax, Mass.) got the start and threw 6.0 innings and struck out six, earning the win. Junior Brian Gaughan (Walpole, Mass.) struck out one and allowed two hits in 2.0 innings. Senior Matt Draper (Lowell, Mass.) closed the game in the ninth, retiring the side in a 1-2-3 inning.

Robert Gallagher’s leadoff double got the River Hawks on base early. The senior advanced to third on a wild pitch before coming in to score on an infield single from freshman Brandon Fish (Londonderry, N.H.) to give UMass Lowell a 1-0 lead in the first inning. Ryan Proto grounded out to third, but Gerry Siracusa came in to score to double the advantage. The Highlanders scored three in the bottom of the first to take the lead.

The River Hawks went up 4-3 in the second behind a two-run single from Gerry Siracusa, bringing in Robert Gallagher and sophomore Jimmy Sullivan (East Hampton, Conn.). The Highlanders responded in the bottom half of the inning, tying the game with a solo home run. In the third, Ryan Proto drilled a solo shot to left field to put UMass Lowell back in front with a 5-4 lead. Alex Luccini’s ground out scored Frank Wayman to extend the lead to two runs.

In the bottom of the third, a leadoff solo home run made it a one-run game. Michael Quigley struck out Ortiz to end the inning, his third of the game. The River Hawks could not take advantage with the bases loaded, leaving three stranded in the fourth. Quigley struck one in a 1-2-3 bottom half of the inning. Sophomore Roddy Hernandez (Jersey City, N.J.) hit a leadoff double in the fifth before Alex Luccini’s two-run shot to right-center made an 8-5 game. Robert Gallagher scored on a wild pitch to put the River Hawks ahead by four.

UMass Lowell stretched the lead in the sixth after a wild pitch scored Jimmy Sullivan. Gerry Siracusa’s RBI single brought in Alex Luccini to push the lead to 11-5. A two-out single by the Bearcats in the bottom of the sixth cut the lead to five. The River Hawk defense looked sharp in the seventh with a 4-6-3 double play and a line drive catch by Brandon Fish to end the inning.

The Highlanders battled back in the bottom of the eighth to cut into the lead. A two-out, two-run single made it an 11-8 game heading into the ninth. Frank Wayman’s two-run double in the top of the ninth stretched the lead to 13-8. In the bottom half of the inning, Matt Draper took over on the mound and retired the side in order to send the River Hawks to the championship game.