River Hawks Take Down No. 1 Maine 9-7 to Advance in AE Championship 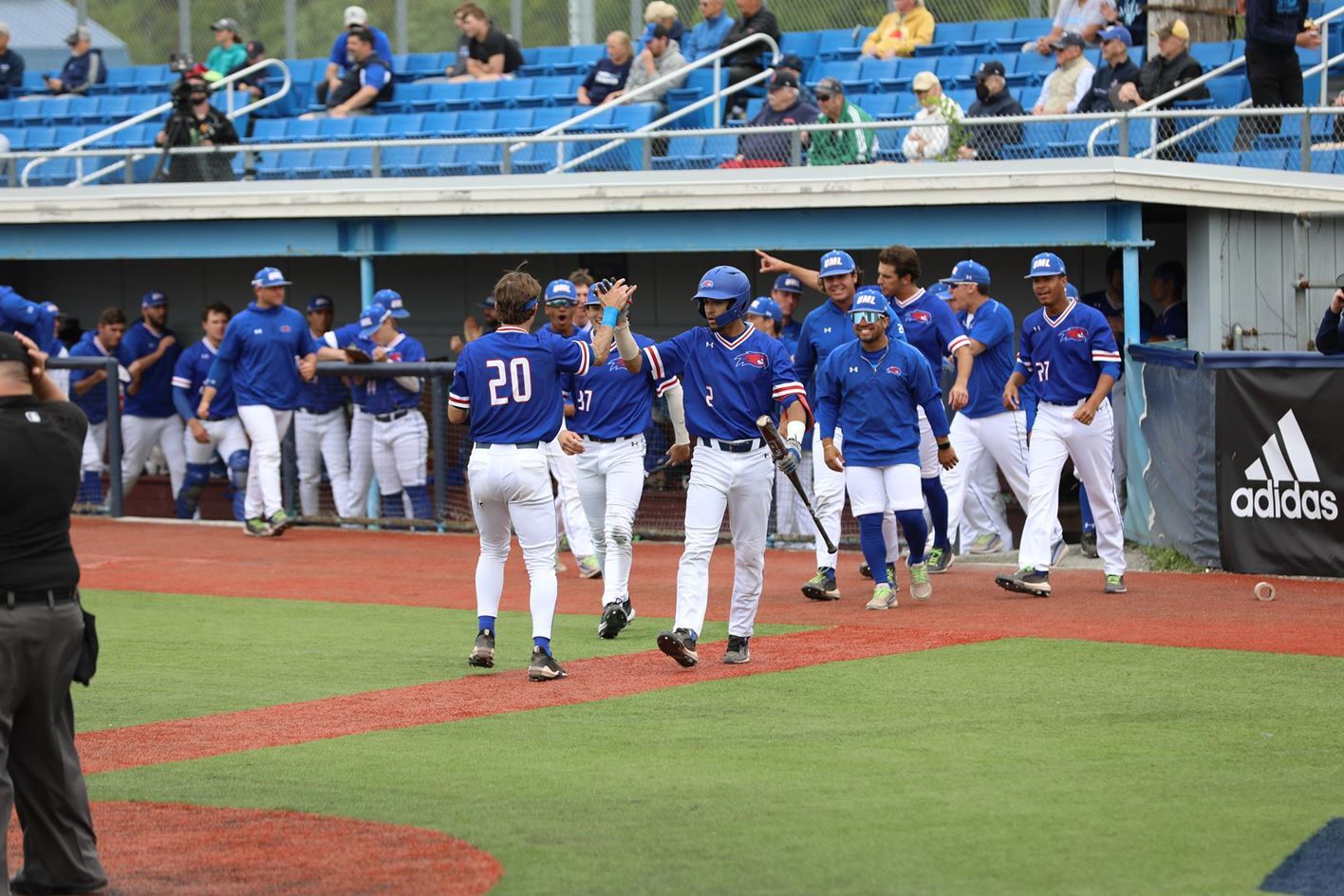 ORONO, ME. – The UMass Lowell baseball team (27-28, 15-15 AE) knocked off top-seeded Maine in a 9-7 thriller in Orono on Thursday afternoon. The River Hawks advance to the next round and will play #2 Binghamton at 11 a.m. Friday morning.

“It was a great team win again,” said head coach Ken Harring. “Frank [Wayman] and Ryan [Proto] were huge for us and our offense with big two-out hits. Our bullpen was fantastic and the catch at the end of the game by Alex [Luccini] just capped off an incredible effort by our players.”

UMass Lowell got going early as Fritz Genther hit his 10th home run of the season in the first inning, a solo shot to right-center to give the River Hawks an early 1-0 lead. Ryan Towle threw a 1-2-3 inning, keeping the River Hawks in front. Maine tied the game in the second inning on a solo home run from Joe Bramanti. The Black Bears loaded the bases with one out when Marquez doubled to left to score two for a 3-1 lead. A sacrifice fly made it 4-1 Maine before Towle struck out McDaniel to end the inning.

After senior Robert Gallagher (Mullica Hill, N.J.) was walked with two outs, Genther singled to left to put runners on first and second. Gerry Siracusa singled to left field to score Gallagher and make it a 4-2 game. Freshman Brandon Fish (Londonderry, N.H.) continued to hit well and singled to right field to score Genther, cutting the lead to one run. Bramanti hit his second solo home run of the day to put the Black Bears up by two in the bottom of the third. Towle responded with two strikeouts to end the inning.

Ryan Towle picked up another strikeout before an RBI double made it 6-3 Black Bears. Zach Fortuna came in relief of Towle with two outs and a runner on second. The sophomore walked Bramanti but forced a fly-out to end the inning.

Robert Gallagher hit a leadoff double in the fifth before Genther singled to left to bring in the senior, making it a 6-4 game. Siracusa followed with a single to right, moving Genther to third. After Maine made a pitching change, Brandon Fish was hit by a pitch to load the bases. Ryan Proto tripled to right field to clear the bases and give the River Hawks a 7-6 lead. Frank Wayman followed with a single to right to score Proto and put UMass Lowell ahead by two. Fortuna threw a scoreless fifth with the River Hawks still in front.

Maine hit back-to-back singles to put runners on first and second in the sixth inning and the River Hawks brought in Matt Draper in relief of Fortuna. With the bases loaded, Bramanti grounded into a double play, but one run scored to make it an 8-7 game. Draper struck out Knotts to end the inning, keeping UMass Lowell ahead.

The River Hawks were held scoreless in the seventh as the Black Bear’s offense returned to the plate trailing by one. Senior Sal Fusco (Colonie, N.Y.) took over on the mound in the bottom of the seventh and escaped a bases-loaded jam to end the inning. Sophomore Roddy Hernandez (Jersey City, N.J.) drew a leadoff walk and freshman Alex Luccini (Hopedale, Mass.) followed with a bunt to put two runners on in the eighth. The River Hawks couldn’t take advantage and left both runners stranded.

Sophomore Michael Quigley (Halifax, Mass.) came into the game for the eighth inning, making his 18th appearance of the season and his first of the postseason. After a leadoff single, the sophomore struck out Bramanti and forced a fly-out. With two on and two out, Quigley forced a fly-out to end the inning.

In the ninth, Ryan Proto singled to left to put a base runner on for UMass Lowell. Frank Wayman continued to hit well and doubled to center to score Proto and put the River Hawks ahead 9-7. Hernandez drew a two-out walk to put two runners on, but both were left stranded as UMass Lowell took a two-run lead into the bottom of the ninth. Henry Funaro entered the game and with two outs and a runner on, Alex Luccini made an incredible catch in left field to end the game. The River Hawks advanced to the next round of the America East Championship and will play #2 Binghamton on Friday.