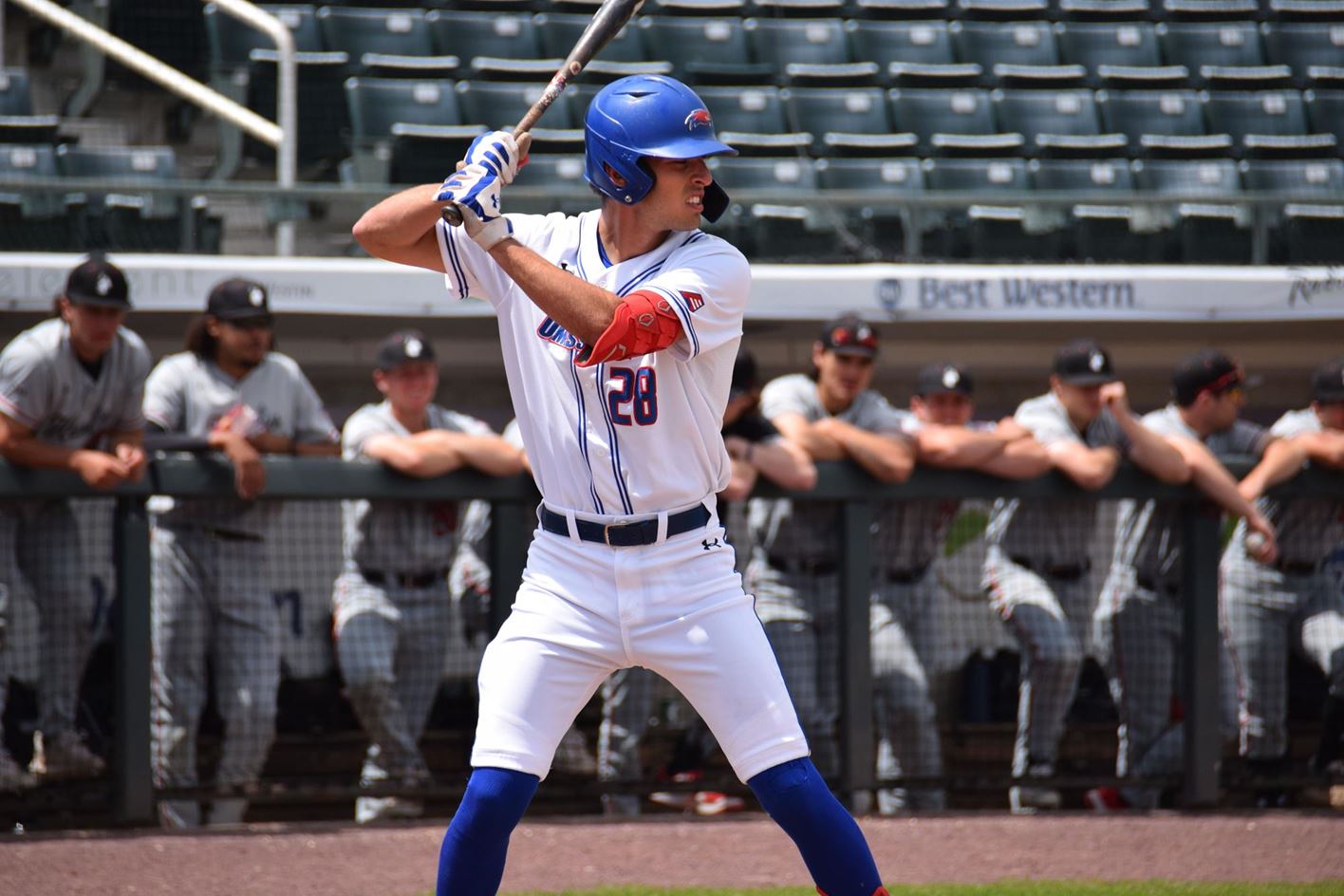 The final home game for the UMass Lowell River Hawks (23-27) may have been the best game played all spring at Lelacheur Park. The only bad part was the final result. The Northeastern Huskies (27-25-1) pushed across a run in the top of the 12th inning to defeat Lowell by a 4-3 score. A game that saw plenty of good pitching on both sides, in the end, was decided by a bad bounce in the outfield. Lowell had their chances in Tuesday afternoon’s game but they would leave 14 runners on base. They hit into three double plays, one with the bases loaded. The offensive execution just was not there when it needed to be and that’s important when you consider that the River Hawks are heading to the leagues postseason tournament. Games like this can go a long way toward winning a title and moving on to a regional site.

Head Coach, Ken Harring, scripted his pitching for this game. For the most part, it worked. Ten pitchers would see the mound for the River Hawks in the home finale. That number may have ended up being a little high however, that can happen when extra innings become a part of the process. Head Coach Mike Glavine of the Huskies would use seven hurlers as both teams wanted to begin their last conference weekend on a winning note. The two starters for both teams were excellent. Jake Gigliotti went the first four for Northeastern and threw scoreless ball while giving up four hits. Not to be outdone, Brendan Holland went the first three for Lowell and matched zeros with Gigliotti while allowing only one hit. It would be the start of good pitching throughout.

Northeastern did strike first in the fourth against Sal Fusco. Spenser Smith (4-5, 2 RS) reached on an infield hit. He advanced to third on some smart base running when Luke Beckstein hit a ground ball to third baseman Brandon Fish who made the play across the diamond for the out. However, the base was left uncovered and Smith made it there safely. Smith scored on a Fusco wild pitch two batters later and Northeastern had a 1-0 lead. The River Hawks would get single runs in both the seventh and eighth innings to take a 2-1 advantage. In the seventh, Frank Wayman led it off with a base hit off of Michael Gemma. River Hawk catcher Jake Fitzgibbons dropped a bunt down the first base line for a bunt single. Fritz Genther then moved both runners along with a sac-bunt of his own. Gemma was out and Matt Devlin on for the Huskies and he faced one batter Alex Luccini and walked him. Coach Glavine made his third pitching change of the inning bringing on Jack Beauschesne to face Gerry Siracusa. Siracusa won the battle by hitting a sac-fly to center to score Wayman and tie the game at 1-1. In the eighth, Beauchesne got into trouble by hitting Connor Kelly with a pitch. A walk and an infield error loaded the bases. It forced another pitching change by Northeastern, so out went Beauchesne, and in came Nick Davis. He faced PH Robert Gallagher who gave Lowell the lead with a sac-fly to center that scored Kelly. It was 2-1 Lowell after eight.

The Huskies tied the game in the top of the ninth against Zack Rodgers who was brought on to save the game for the River Hawks. The first two men he saw ended up on base. A walk to Beckstein was then followed by a HBP to PH Corey DiLoreto. Rodgers was lifted and replaced by Matt Draper. After getting the first man he saw to fly out to center field, PH Buddy Mrowka hit what looked like a double-play grounder to 2nd baseman Roddy Hernandez, but he fumbled the ball around the second base bag and the tying run crossed the plate in the person of Beckstein to make it a 2-2 game. In the bottom of the ninth, Lowell had a great opportunity to walk off. Jordy Allard was now pitching for the Huskies. With one out he walked Luccini. Brandon Fish (2-4, 2 BB) then singled Luccini to second base. Both players move up on a wild pitch. With the winning run 90 feet away, Allard then got both Kelly and Jimmy Sullivan to strike out swinging and we were headed for free baseball.

Both teams scored in the 11th to keep the game tied. Northeastern took the lead with Michael Quigley on the mound for Lowell. Quigley retired the first batter, then walked the next two. Quigley’s day was done and Zach Fortuna was called in. He walked Mark Darakjy to load the bases, then gave up a sac-fly to Danny Crossen to put the Huskies in front 3-2. Lowell answered in the bottom of the eleventh. Allard, with one out, walked Luccini. Siracusa (1-4, 2 RBI) then ripped a double down the left-field line to score him and tie the game at 3-3. In the top of the 12th, the Huskies finally put the game away for good. Smith hit a sharp line drive to right for his fourth hit of the game and advanced to third when the ball bounced off of right-fielder Kelly. Then Beckstein hit an infield single to second base that scored Smith with the go-ahead run and it was 4-3 Northeastern. Brett Durham came out of the Huskies pen and retired the River Hawks to pick up his first save of the season. The win goes to Allard who is now 3-2. The loss goes to Fortuna who is 0-1.

After the game, coach Harring announced that LJ Keevan will start the opener vs Albany on Thursday. He also said, “he will be on a limited pitch and inning count.” As far as the rest of the series goes, that will depend on the results of his games and others in the league. He was happy about getting some players at-bats and time on the mound on Tuesday. Just not happy with the result.