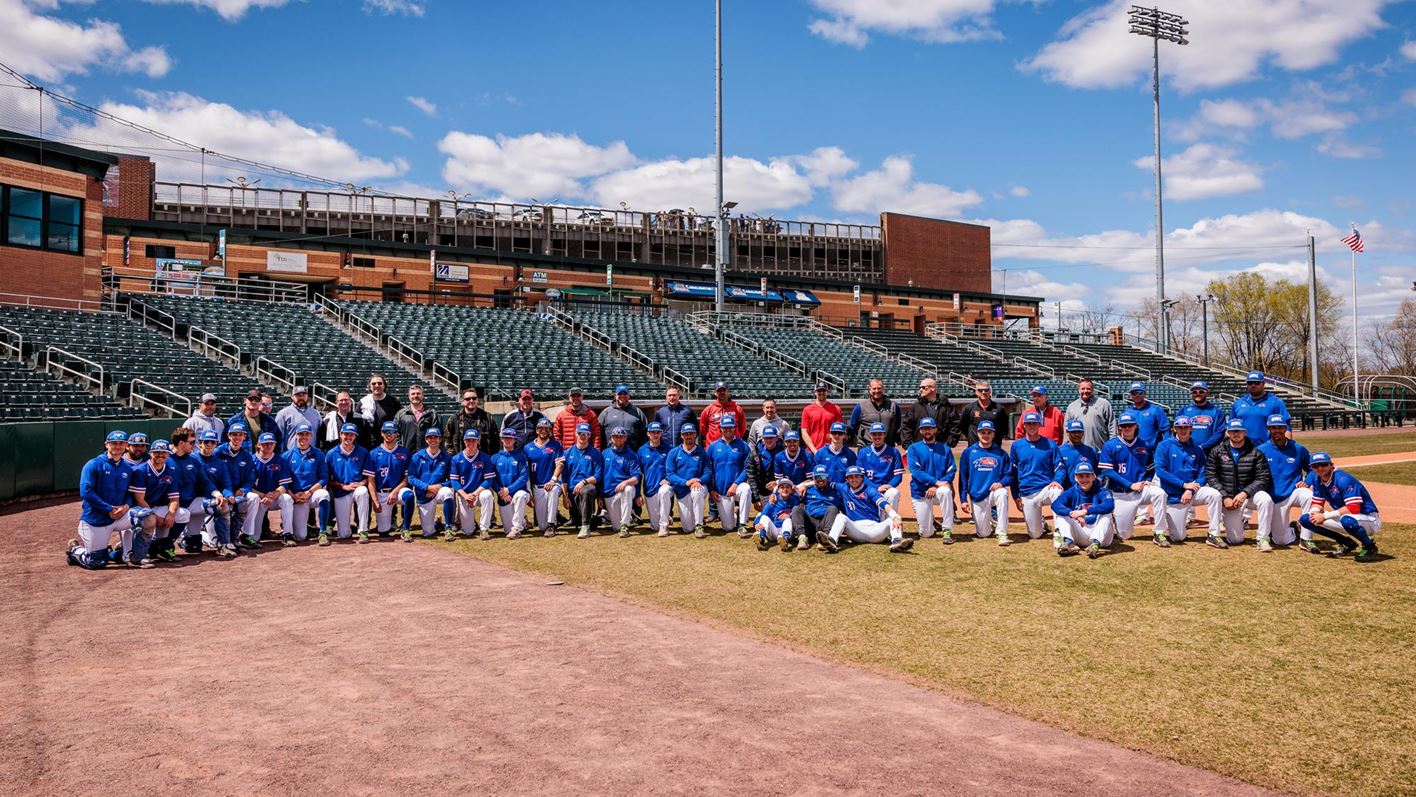 LOWELL, Mass. – Playing in the College World Series is an accomplishment few programs get to experience. In 2001, the UMass Lowell baseball team made history and earned the right to play for a national championship. A year later, the 2002 team repeated the feat, taking the program to its second consecutive College World Series. Twenty years later, members of those teams returned to LeLacheur Park where they were honored and celebrated by family, friends, and the current team.

The 2001 UMass Lowell baseball team made history after becoming the Northeast Regional Champions and earning a spot in the College World Series. The 2001 team holds several program records including games won, runs scored in a season, hits in a season, and RBI in a season. After winning four of five games to secure the Northeast-10 Championship, the River Hawks moved on to the NCAA Tournament, where they knocked off Concordia to advance to the program’s first Division II College World Series. The team won its program-record 39th game of the season and first College World Series game with a 13-5 victory over Central Missouri in the opening game of the tournament.

A year later the 2002 UMass Lowell baseball team returned with another successful regular-season campaign, winning 35 games, and setting a program record with 64 home runs in a season. After capturing another Northeast-10 Championship, the River Hawks advanced to the NCAA tournament again. Despite falling to Concordia, UMass Lowell bounced back with a win over Bryant in an elimination game followed by two wins over Concordia, sending the team back to the College World Series. There, the team picked up two wins over Florida Southern and Ashland University before falling to the eventual champion, Cal State Chico.

Former head coach Jim Stone led both teams to historic postseason appearances and his 2001 team still holds the record for most wins in a season with 39 victories. Stone boasts a career record of 801-393-7 for a .667 career-winning percentage. He was named the New England Intercollegiate Baseball Association (NEIBA) Division II Coach of the Year nine times and earned Northeast Region Coach of the Year four times. Stone led the River Hawks to NCAA Tournament berths in 14 seasons, including his last seven years at the helm among countless other accolades in his tenure.

“It feels great to be back. The ballpark looks great and it’s fun to get back here. Seeing where the program has gone is awesome,” said Stone. “Of course, my favorite memories are of those trips to the World Series. The guys really enjoyed it and it was our goal all the years that I’d been here. We had so much support and a lot of people made the trip to Montgomery, Alabama to watch us. It was awesome, the whole experience was awesome.”

Former team captain Evan Greene has cemented his name in the River Hawk records books, sitting first in season at-bats, tied for sixth in runs in a season, and fourth in doubles in a season. Greene was one of the captains to lead the 2001 team to that first College World Series appearance and he also earned NE-10 All-Conference First Team honors that same year.

“It feels awesome being back here. I try to come back once or twice a year; my son likes to come and watch the team play. I remember looking at some of my teammates in one of our games, knowing that we were going to the College World Series, that was a special moment,” said Greene.

Living in the area, he returns to LeLachuer Park every year with his son to watch the team. The memories come back every time he enters the ballpark, and his experience is something current head coach Ken Harring asks him to share with the team each year.

“I have a chance to come to speak with the team usually once a year, just about what they’re going through and life after baseball. You quickly learn it’s an advantage to play a sport in college,” said Greene. “I now get to coach my son and teach them the things that I learned in college. In Lowell, we always pride ourselves on being the grinders, so when you look at the current team and the alumni, everyone knows what it means to play here.”

Allen Mottram holds the single-season record with 16 home runs for the River Hawks and has the record for most home runs in a career with 35. He also holds the program record for most hits in a career (282), career runs batted in (216), single-season runs batted in (73), and total bases (457) in a career. Mottram earned Northeast-10 All-Conference First Team honors in 2002 and 2003 and New England Collegiate Conference (NECC) honors in 2000.

“Being back here is great. It’s exciting to see some old teammates that you haven’t seen in a long time and being able to see the program now, it’s great to be back,” said Mottram. “Something that made us so successful as a team was how close we all were, on and off the field. We had a lot of great players that came through here and that’s what I remembered most, that and our success here. I wish we came back with the national championship, but it was fun and a great experience.”

Legendary Coach Jim Stone was at the helm of UMass Lowell baseball for 37 years after serving as an assistant coach his first year with the team. As Harring began his own coaching career, he recalls playing against Coach Stone and the River Hawks in his time at St. Anslem College. “I remember playing those teams in my first two years as a head coach there. I vividly remember them kicking my butt two years in a row and just thinking how good they were. They were the team you measured yourself against and my goal was to be as good as them at some point.”

“They’re the standard and he [Coach Stone] has been fantastic to me. Especially early on, he was someone I could lean on and ask questions about the school,” added Harring. “I knew I had a standard to live up to daily, not only for him but for the players that played for him. I think they had a blue-collar mentality and that’s something we try to do every day. They played hard and they played the game the right way. They loved each other and were a team that you didn’t love to play against. They set the standard for what this program is all about and we have the chance to show them where the program is at now and it was great to have them back on the field.”

The 2001 and 2002 teams will be remembered in UMass Lowell baseball history forever, not only for their success on the field but also for their impact on the program and its future. The current team had a chance to meet with the alumni and learn from those who came before them and paved the way for the future of River Hawk baseball.